Face To Face: Kiti’S Path From Andros To A Role On The World Stage 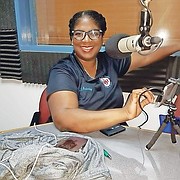 Kiti on the radio educating listeners about physical therapy.

A Bahamian has been elected to chair the North American and Caribbean region of the World Confederation for Physical Therapy (WCPT). Kitiboni Adderley, a zestful, caring physical therapist with more than 18 years experience was elected by her peers during the WCPT’s 2019 Congress held last month in Geneva. The WCPT, which consists of five regions covering 113 countries, represents more than 450,000 physical therapists worldwide.

Kitiboni has been representing The Bahamas at the WCPT for a decade. She also recently completed her term as president of the Bahamas Association of Physical Therapists, a position she held for the past four years. WCPT is the sole international voice for physical therapy and states its commitment to furthering the physical therapy profession and improving global health.

For Kiti, as she is affectionately called, it is a chance to continue to do something she is passionate about – “advocating for and teaching people about physical therapy”.

When she graduated from St. Augustine’s College in 1992, the school’s yearbook the “Beacon” stated that Kiti had her heart set on becoming a marine biologist. However, that summer, a cousin of hers who lived in England came to visit. She had just completed her tertiary education in physical therapy. Coming to The Bahamas to spend time with Kiti was her graduation treat. The entire summer, Kiti’s cousin raved about physical therapy until Kiti became intrigued. At the time, she was due to attend the College of The Bahamas to study biochemistry, so there was no need for her to change her major at that point. What Kiti did, however, was to volunteer at Princess Margaret Hospital with physical therapist Velma Burrows and from there Kiti began on the path she wanted in life. She went on to study at Florida International University and then at the University of the West Indies in Jamaica before returning home to practice her craft.

Kiti’s mother Ann, centre, with her children and grandchildren.

Kiti loves to learn, and so she made it mandatory that she continued to learn more about her field by doing refresher courses and studying new areas of her field as often as possible. She tells her three daughters (Karièl, 25; Jaydynn, 13; and Khalaire, nine) that in their careers, they should strive to put something new on their resume every six months. Kiti sets an example by attending courses in the US and the Caribbean. In 2014, she became a certified lymphedema PT specialist and recently, she became certified as a kinesio-taping instructor. In 2017, Kiti earned her doctorate degree from Utica College in New York.

As Kiti expands her reach to the world stage, she remains humbled by her background and upbringing. She was born in Nassau but before her first birthday, her parents Javan and Dr Ann Rolle moved to Andros. Her father is an electrical engineer and his job at BEC required him to move there. Her mother, a nurse at the time, gladly moved with her husband to the island to help serve residents there.

In Nicholl’s Town where the family settled, Kiti enjoyed many days enjoying nature, something she still does today: “Nothing stills my soul like being on the Family Island close to the beach, or hearing the wind whistling through the needles of the pine trees… close to nature. It has shaped who I am today. I thoroughly loved growing up on the Family Island.”

But The Bahamas wasn’t Kiti’s only childhood experience. Her mother hails from Carriacou in Grenada. Therefore, Kiti had the opportunity to spend many summers there. She would watch her grandmother pick her own cocoa seeds and pound them before making lovely desserts like cocoa balls. Both of her grandmothers were steeped in agriculture and often relied on herbs and trees to heal their families. Today, her mother carries on that tradition as she is a holistic practitioner, who focuses on metabolic health.

With a Grenadian mother in the kitchen, Kiti grew up enjoying native dishes from her mother’s country, allowing her to appreciate both cultures that make up her tapestry.

Her father played an important role in helping his children, including brother Javan Jr and sister Ailleen, who have a deep appreciation for their Bahamian roots and a strong desire to learn of and respect other cultures. He made sure each child read the family’s monthly subscription to National Geographic and Reader’s Digest. He also took the time to take the kids trekking through Andros forests to look at old abandoned homes, finding relics like old lanterns while on their adventure, explaining how people lived in times long gone. He would also take them to look at old churches and study their architecture, noting the difference in design and denomination. In this way, Kiti’s parents gave their children a well-rounded experience that she feels has positively shaped her today.

Her parents met in England while attending university. They also married there before her mother made the decision to move to The Bahamas with her father. Kiti attended Mastic Point Primary, then Nicholl’s Town Primary in Andros before the family returned to Nassau. She then attended Queen’s College for a year before spending her final three years of primary school at St Francis & St Joseph’s. Her parents always stressed the importance of education.

She says of her mother: “My mother is a fantastic woman. She has served The Bahamas for more than 40 years as a nurse, often going into areas in the Family Islands where other nurses did not want to go. She was giving selflessly to AIDS patients in the early 1980s when there was a stigma attached. She worked with people like Father Jim and Sister Claire to form the Good Samaritan Ministry. My mother is always going above and beyond to make sure her fellow man is good.”

There is no doubt that Kiti has followed in her mother’s footsteps. To meet her is to meet an exuberant, enthusiastic therapist who puts her all into what she does. She has a high energy level and a willing smile and she can often be heard on the radio explaining the importance of physical therapy in improving one’s life. She enjoys being able to help patients such as breast cancer survivors and other oncology patients. Too often, they have treatment but do not get the physical therapy they need, which could have a detrimental result down the road. By educating them, Kiti has helped many cancer survivors have a better quality of life. She advises that cancer patients visit her from their first diagnosis to help map out a plan to preserve their muscles and body. She also works with persons with disabilities, and is excited to be helping popular activist Erin Brown prepare for the Paralympics. She has served as physical therapist for The Bahamas national team, and has travelled around the world doing so, as they participate in meets such as IAAF, CAC games and Carifta. She enjoys volunteering with the Kingdor Parkinson Foundation, and also serves as Lead of Physical Activity for for the Healthy Bahamas Coalition.

Congrats Kiti! You have done well!