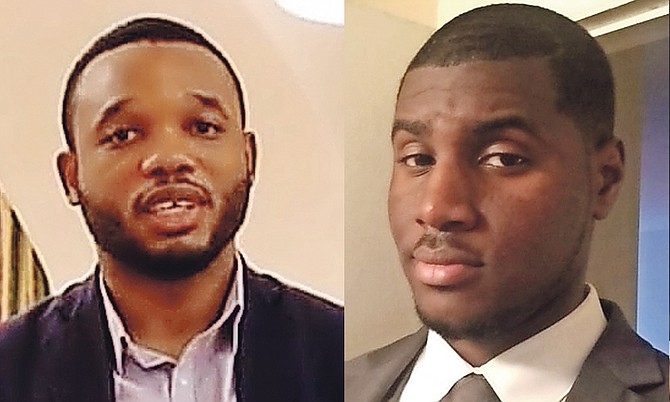 INITIAL reports from the autopsies of Alrae Ramsey and Blair John have added another layer of questions to the mystery of the men’s deaths.

According to some Italian news outlets, results of the autopsies conducted yesterday confirm both men died as a result of drowning.

There were also wounds on one of them that suggested his body was dragged, other reports say.

John’s mother Cathleen Rahming told The Tribune last week that he was a strong swimmer and fit.

His relatives, The Tribune was told, have rejected the autopsy findings and are waiting for CCTV evidence that could give better insight into the situation.

A source close to the matter told this newspaper that a third Bahamian was to meet both Ramsey and John in Italy, but he never made the trip due to an issue with a visa.

He allegedly booked the room at bed and breakfast, Via la Loggia 2 in Turin, where the men were staying.

The developments came as Ellison Greenslade, high commissioner of the Bahamas to the United Kingdom and Northern Ireland, has been dispatched to Italy to make further inquiries into the circumstances surrounding the deaths.

The former police commissioner arrived in Italy on Saturday.

According to Italian news outlet Torino Today, there was also confusion over the men’s luggage. The translated article is below.

“Corpses Alraé Ramsey and Blair John both drowned, no signs of violence, corpses found in the river Po on 4 and 5 June 2019,” the Italian report read.

“Both Alraé Ramsey and Blair John, the two Bahamians of 29 and 28 years whose bodies were fished out of the Po River on 4 and 5 June 2019, both died. These are the first findings of the autopsy performed by the coroner Paola Rapetti, charged by prosecutors Giulia Rizzo and Enzo Bucarelli, who coordinate the investigations carried out by the police team of the police on their disappearance.

“The wounds found on one of the two bodies are not fatal and could even be the result of body dragging. Toxicological examinations are still in progress to establish whether the two had taken substances (poisons, alcohol, drugs) before ending up in the water.

“In the afternoon, the police also found their luggage. They had not been stolen but were simply in another locked room in the Via La Loggia bed & breakfast where the two had spent the last days of their lives.”

Another news agency Torino la Repubblica said of the suitcases: “The investigators of the police squad of the police station found in a closed room of the bed & breakfast, in via La Loggia 2, where the two friends lodged all the suitcases that seemed to have disappeared.

“And they are doing all the investigations to understand why they were moved and who moved them.”

It also said: “The two lived for a long time away and the trip to Italy had been an opportunity to get together. There should have been three of them, with a reservation for four nights in a bed & breakfast near the Lingotto, from 28 to 31 May. On June 1, Ramsey was supposed to return to Vienna - where he should have taken an exam - and the other to Canada, where he lived. A third friend who had booked and paid for the room with his credit card from Minnesota where he lives had changed plans and never showed up at the hotel. The Bahamian community does not believe in the incident hypothesis.”

However, another Italian news source claimed their suitcases were found a few hundred metres away from the park in a trash bin.

Ramsey, a foreign service officer on study leave in Vienna, was reportedly in Turin on a break. He and his friend, John, were staying at a bed and breakfast establishment at Via la Loggia 2 in Turin.

John, a 28-year-old Saint Mary’s University graduate student, was there to attend a psychology conference.

Our condolences to the families ........ We pray that HE Greenslade deals favorably with this delicate international matter .......... Good working of the MOFA

It is not uncommon for a good swimmer who has not been trained in how to rescue a drowning person to also drown while trying to rescue a panicking person who is drowning .As a boat captain we are taught to throw the person a floating device or object first. If you have to swim for them you come in from their back even if you have to dive under and surface behind them

Just too many unanswered questions with possibly too few clues if any to what really happened. This might unfortunately be an ominous sign that little more will be learned which could or should be made public.

"were also wounds on one of them that suggested his body was dragged, other reports say"

"found in a closed room of the bed & breakfast, in via La Loggia 2, where the two friends lodged, all the suitcases that seemed to have disappeared."

@licks according to this story it does appear to be a reunion and a third friend was to have joined them. There's nothing better than going to an interesting foreign city where you have a friend who knows the language and culture. All of that other crazy rendezvous speculation appears to be just that.

Who knows ?? There is no talk of girlfriends or children and a lot of gay people are smart and achievers ,, you very much don,t want them to be gay ??Does did matter ??I know if I had to place a bet w money involved how I would bet . Realize I don,t look at being gay from a faux Christian point of reference .I think you are born that way and some gay people are good and some are bad just like any subset of people Its very sad and my thoughts go out to their families

It matters if they're not gay, it wasn't some tryst and persons are recklessly smearing their names. I say "smearing" because while everybody has a right to be who they want to be, we all know that that label is used loosely in the Bahamas and world over with the intent to insult and damage reputations. If it were my family I wouldn't want it done to them while they can't defend their names. So I'll go with the mother's story. Friends meeting up in Italy.

Thinking someone is gay to me is not smearing or insulting them . There are many tells " that you don, t want to see . I won,t list them bc you don,t want to see them .You were the first on this thread today to bring up sexuality and defend that they are straight .Is a straight life worth more than a gay life??

You don't see what you don't want to see. I said everyone has a right to be who they want to be, but very often the tag is used to insult..so unless I know for certain someone is gay I'm not taking anyone's Spider-Man instincts on the topic. I'm not even going to dignify the other straw man question about the value of a life

Girlfriends and children??? Lol. I have a male friend who is very much heterosexual who always jokes that he needs to have some children soon so that the accusation isn't hurled at him. Seriously? In 2019? You have to a bunch of illegitimate children and date someone you don't love to prove you're not gay?

Talking about one friend is anecdotal .I can list five "tells " that lead me to think they may have been gay .You will have an anecdotal reply for all five which still will not change my mind .

Yeah it is one instance. I'm laughing because you used it. It's hilarious. I mean that literally.

Casting aspersions whether true or not makes you a lowlife headline hunter. I hope that your hand is not in your shorts!

I replied to a comment someone made , I don't think suggesting someone is gay is an insult .I know quite a few gay people that are nice ,honest ,smart and add value to our country

Why do you keep referring to that. Why is there even a need to point it out?

you started the thread today about sexuality ,,basically defending the fact you thought they are straight

Ok. I'll take the blame for reopening the wound. But my "real" point was the opposite of what you suggest. My point was sexuality had no place in the discussion in the first place.

No that was not your really point .You write well and if that was your point you would of written it .Your point was to show they were straight .

If you call what I do here writing well, i hope you grade my english exam....misspellings, run on sentences, starting sentences with conjunctions....

I repeat my point was sexuality has no place in the discussion. From the first day it was clear the mothers knew these guys were meeting each other for a reunion this was no "secret meetup in a foreign city where noone would be the wiser". Why bring it up. That is my point

So are you attempting to justify murder with allegations of sexuality of the victims as is done here by statements such ‘he was known to police’, ‘he was wearing a monitering device ‘, ‘he was recently released from prison.’ So since the criteria has been clearly established for those who deserve to doe, what is the criteria for those who are allowed to live?

I,m not sure who your replying to ,but its not right to murder anyone ,,straight ,gay or bi .I think the police said they drowned .

‘They drowned ‘ can also mean ‘They were drowned.’

First of all- Tribune- there are plenty people in Nassau able to translate the original article with some sense- Stop using Google translate in such a literal way. Second "A source close to the matter told this newspaper that a third Bahamian was to meet both Ramsey and John in Italy, but he never made the trip due to an issue with a visa." Bahamians do not need VISAS to travel to Italy so something is wrong with that report and this paper should know that.

The third individual is working/studying in the US. The Visa can relate to re-entry to the US if it is being renewed, extended etc.

We don't know for sure, but one thing I do know is that it is difficult to get most Bahamians to swim in water that we consider 'dirty' and most rivers are not clear enough to our liking.

Giving recognition - sometimes Nature's forces are far beyond our abilities to work within them.

Accidents happen. River banks are slippery and I have fallen countless times. This Tribune report is all over the place and unhelpful and adds to the families pain. As Greentea said get a proper translation and report in a responsible manner.

I agree. Alrae who had the injury to the head could have fallen in and John jumped in to save him. There are so many possibilities other than some seedy storyline

Something smells here and it does not look good for the Italians. Both drowned in that river,I don't think so.People don't swim in that river period. There is more to this than what the police are saying.Stayed tuned.