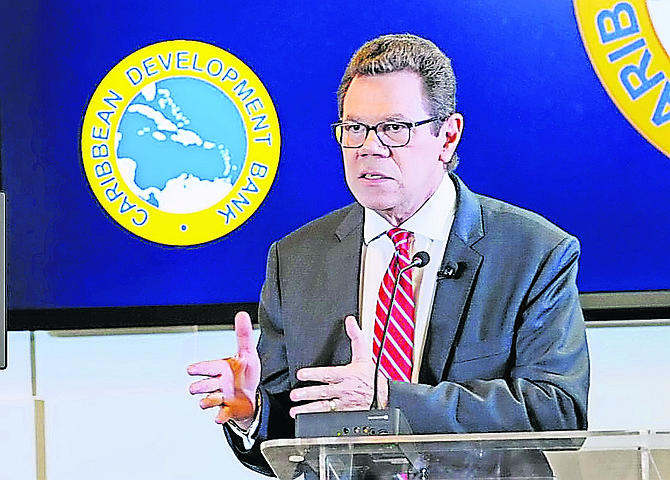 THE Bahamas is the sixth most vulnerable country in the region, according to a recent Caribbean Development Bank (CDB) study.

In interviews with The Tribune, CDB President Dr William Warren Smith listed building economic and climate change resilience, switching from fossil fuels to more renewable sources of energy and reducing inequality as all key areas in which the Caribbean Development Bank can help The Bahamas reduce its vulnerability.

Dr Smith made these comments during the 49th Annual Board of Governors Meeting of the CDB, which was held last week in Trinidad and Tobago.

The report defines vulnerability as “the exposure to sharp eternal shocks, either fiscal, trade or climate-related, and can be distinguished from there term fragility”, and found the CDB’s seventeen Borrowing Member Countries (BMCs) are middle-to-high-vulnerable states.

The report, which focuses on economic, social and environmental vulnerability, found “tourism-based economies appear to be more vulnerable than commodity-based economies”.

For 2017, The Bahamas received an overall score of 0.57 out of 1.0, ranking lower than countries such as St Lucia and Jamaica but above Barbados, Antigua and Barbuda.

The Bahamas’ vulnerability increased in comparison with 2016, when it ranked 9th with a score of 0.52.

The studied noted the factors that contributed to an increase in vulnerability in some countries included “the rise in the number of murders; increased dependence on energy-related imports; (and) the impact of natural hazards, particularly hurricanes”.

“The CDB I think is very well positioned to be able to assist the Bahamas,” he continued. “One, we have access to very, very attractively priced resources, financial resources, for first of all building resilience - economic resilience and also building infrastructure resilience to climate effects.

“We have a relationship with the European Investment Bank where what they do is they provide us with financing, long-dated financing, and there’s a subsidy element in that financing which the government is the beneficiary of, not the CDB.

“So what it does, it reduces the cost of the financing for economic resilience building and for the rehabilitation of infrastructure from the Bahamas.”

Dr Smith noted the bank prefers to take a proactive approach, particularly as it relates to identifying infrastructure that needs to be “climate-proofed”.

Earlier this year, Prime Minister Dr Hubert Minnis announced his administration re-enrolled in this regional insurance fund, which the former Christie administration exited after determining the country had little chance of receiving a payout because of how the scheme was structured.

“There is an opportunity in the Bahamas to move towards cleaner sources of fuel,” he said.” And the CDB has a programme, again we have access to soft resources, which can be used to transform the electricity sector. You can move to some of the renewable sources of energy, such as wind and solar.  And the CDB has the funding to be able to provide that type of project.

“And the benefits there are not only that you reduce the importation of fuel that is going to damage the environment and worsen the climate conditions. But it also has another benefit in that you reduce the amount of foreign exchange that you have to spend to import that fuel. So that’s another area where we can assist the Bahamas in a climate-related sense.

“What we want to do is continue some of the work that we’re currently doing with the Bahamas to build that resilience,” Dr Smith told the Tribune. And that resilience is not only in relation to sea defences and building infrastructure in a more resilient way but also building your resilience to external economic shocks as would happen with result from rises in petroleum prices and things of that nature.

“Hence the need to focus on renewable energy, where you have good potential.”

Dr Smith added the Bahamas should focus on reducing inequality, particularly in the Family Islands.

What they REALLY want to do is get the Bahamas further in hock by waving money in front of the Government politicians like waving dope at an addict!

Several months ago (December, I think), Dr. Barry Rassin was elected head of Rotary International. I watched his first speech online. One of the scariest things that he cited, was that in 30 years, the Bahamas could be mostly underwater from climate change.

Cat Island will probably have the most land with the highest elevation. The high parts of New Providence rises to 37 meters, and we all be crowding there with the thugs, and politicians. Unfortunately most of the space will be taken up with web shops.