Ladies of the round table talk business 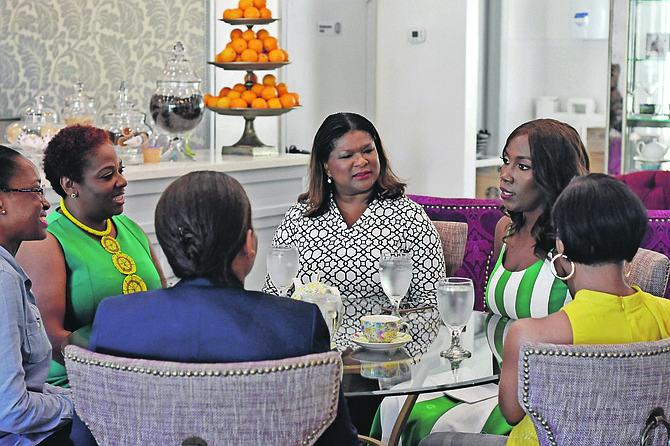 Under the theme and topic of discussion “Bridging the intersectionality of doing business as women”, the women spoke candidly about the barriers they have encountered in business and how they overcame them.

As the sat around a round table at Café Channing Noelle in Caves Village, they spoke about the privilege ideology and how others may perceive those they believe have too much or more than enough.

Georgette Sands spoke of “She don’t need the money” syndrome that has been coined in the Bahamas, and Divinia Blair brought further insight into this specific barrier to women in business – the idea of a woman’s circle of family and friends not being supportive because they feel she already has enough financial success.

Mrs Thomas spoke about how people won’t support a businesswoman’s vision if they think they are from a successful family. She said while this perception has been a stumbling block for her, it has also helped her to push ahead with her brand and use her creativity to develop her business model.

Additional subtopics included: networking, competition, balance, and investing in women. For Lesa Oliver, owner of the Sela Party Store, networking has allowed her to be able to offer her clients products and services she may not have in her store by using other channels. Radio host Ria Newbold then spoke about mentoring and how networking can be positive when applied in the right areas of business development.

All the women present were not intimidated when the word “competition” entered the discussion. As a matter of fact, they were more inclined to recognise that jealousy can sometimes be perceived as competition in business.

The discussion then led to women being able to balance their family lives while operating full-time businesses.

“It is important to maintain a positive outlook, but also be open to the non-traditionalists that Divinia so candidly spoke about,” said Ms Dean. “She also expressed that the expectation that a woman has to be domestic today is no longer essential as it was in the past and it doesn’t take away from her femininity.”

Mrs Thomas also talked about Sheryl Sandberg and the Lean In movement, and all the contributions this American technology executive, activist, author, and billionaire has made in her field. Ms Oliver spoke about still being a full-time employee at a private bank, a youth leader at her church, and running her party stores. She tries hard to balance all her roles because she knows that when she becomes a mother it will be the key to her continued success.

As it relates to investing in women, Ms Blair shared her future plans to secure funding specifically for female-led starter-ups with the Small Business Development Centre.

This group of women intends to keep the momentum going by inviting other female business owners to the table to discuss the challenges they face and to provide solutions. At the end of the discussion, the ladies all agreed that women had far less time to focus on the negatives because they are always hard at work in the missions to be successful.