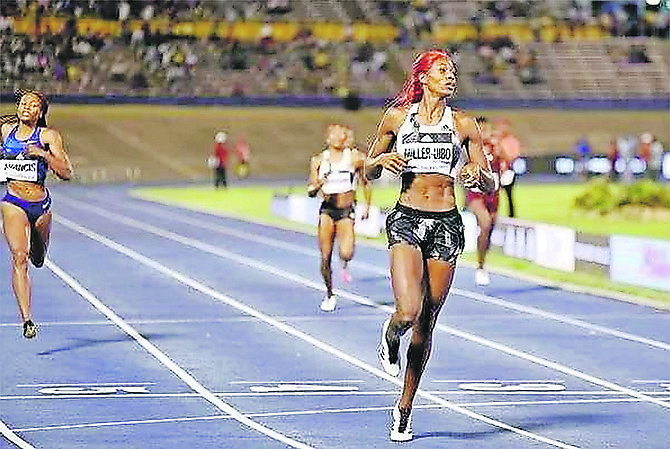 Shaunae Miller-Uibo powers across the finish line to win the 400m at the Racers Grand Prix in Kingston, Jamaica.

Shaunae Miller-Uibo shook off some unwarranted social media slander to power across the finish line in record-breaking time to win the women’s 400 metres at the Racers Grand Prix meeting.

In her first one-lap race ever contested in Kingston, Jamaica, Miller-Uibo wasted no time in defying the report that she and her husband Maicel had drowned in Canada, by establishing a meet record in 49.54 seconds, well ahead of American world champion Phyllis Francis, who had to settle for second in 50.85.

It wasn’t as fast as her season opening victory of 49.05 in April in Florida, but Miller-Uibo felt it was good enough to complete her return trip to the Reggae Island where she has dominated in the 200m in the past. “I think today wasn’t a really good run,” said the 2016 Olympic champion. “I’m working on a lot of things trying to perfect my race but I’m happy I finished healthy which is good.”

“I’m in really great shape this year and we’ve been working on a lot of things so I’m happy with it and excited to see how the rest of the season plays out,” she stated.

“Our main goal as with any year is to stay healthy and we know the times will show come end of the season.”

With this being a major year as she gets set to compete in the IAAF World Championships in September in Doha, Qatar, Miller-Uibo is still undecided whether or not she will contest the 200m or the 400m to add her first world title to her résumé.

But there’s one thing that is certain.

The 6-foot, 1-inch double national 200/400m record holder will be heading to Boston June 19-20 for the Adidas Boost Boston Games for the street 150m race that she easily won a year ago in 16.23 that was listed as a world record.

“I’m always really excited for that meet,” added Miller-Uibo, who posted back-to-back victories and is gearing up for an unprecedented three-straight crown.

All jokes aside, Miller-Uibo said she was disappointed that someone would smear her character by indicating that she and her husband had drowned.

“For the article that was posted, I have not much to say about it,” she summed up. “It’s pretty sad that someone feels it’s okay to make up such a thing. But my husband and I are fine and well.”

Coming off her gold-medal performance at the Commonwealth Games in the 200m in the Gold Coast last year, Miller-Uibo is hoping this year to eventually surpass the bronze medal she won at the 2017 World Championships in London, England.

While Miller-Uibo had a good showing at the meet, a few other female competitors struggled in their events.

Tynia Gaither had the best showing, clocking 22.88 seconds for third place in the women's 200m that also included Anthonique Strachan, who was sixth in 23.31 seconds. American Brittany Brown won the race in 22.65 seconds.

Bahamian national record holder Tamara Myers had her share of problems in the women's triple. After she failed to get on the board, fouling her first two attempts, she mustered a leap of 13.20m or 43-feet, 3-3/4-inches on her third attempt for eighth place. Jamaican Shanieka Ricketts won with a jump of 14.69m (48-2 1/2.

And Devynne Charlton had to settle for eighth in the women’s 100m hurdles in 13.43 seconds. American world record holder Kendra Harrison was the winner in 12.54 seconds.

Gardiner back in action