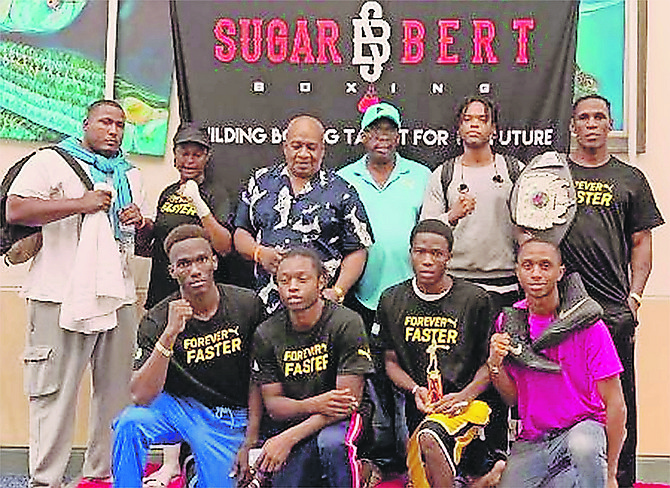 Carl Hield secured the lone gold as the Bahamas picked up three additional silver medals at the Bert Sugar Boxing Tournament over the weekend.

Competing at the Charlotte Harbor Convention Center in Punta Gorda, Florida, Hield dominated his middleweight match from start to finish to lead the team by example.

Lennox Boyce, boxing out of the elite welterweight division, picked up one of the silver medals after he fell short in his final.

Patrick Joseph, a student from Anatol Rodgers High School, won by a walkover after his opponent took one look at him and refused to enter the ring.

In his next match, Joseph got tired and was unable to continue as the referee stopped the bout.

Elizabeth Hutchinson, the lone female competitor on the team, got a bye into the final where she eventually lost out after putting on a superb performance for the silver in her debut as well.

Ronald Woodside, who was originally not scheduled to travel, changed his mind at the last minute and made the trip. He had an impressive showing in the elite lightweight division but came up short in the judges’ corner.

Jovan Johnson, another student from the Anatol Rodgers High School, went the distance in his international debut and lost a heartbreaking three-rounder in the featherweight division.

Also, Keith Major Jr, a novice competing in the middleweight division, could not finish his match because of fatigue.

Vincent Strachan, president of the Boxing Federation of the Bahamas, said he was quite pleased with the performance of Team Bahamas at the tournament.

“The team performed exceptionally well, even better than I had anticipated because having the knowledge that this was a young team, we were just hoping that they would do well,” said Strachan on their return home.

“But they performed beyond expectations. Give and take, the officiating wasn’t its best, so you had to take what they gave you. But I felt that the ones who didn’t win, I think they performed very well.”

Strachan, who served as the team manager, said it was a bit disappointing that Joseph and Major were both not able to complete their matches because of fatigue.

“It was a good experience for these boxers, so I gave them the opportunity to go,” Miller said. “Other than that, the team performed exceptionally well.”

Strachan said they were very pleased as well with the performance from Hutchinson, who showed that she will be a force to reckon with in the future. He said she was upset with the loss in the final because she felt that she could have won.

The team was coached by former heavyweight contender Kieshno Major, assisted by Wellington Smith, the treasurer for the federation.

The tournament served as a qualifier for the National Championships scheduled to be held in Orlando in November. Hield will go on to defend the title he won last year.

Last year, both Boyce and Woodside also won their titles.