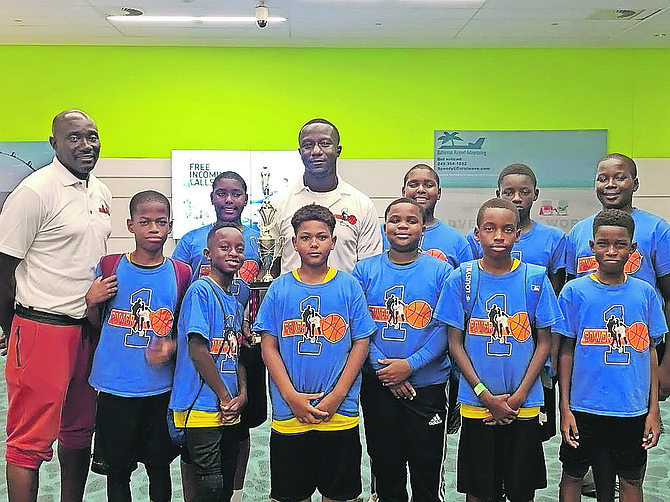 FREEPORT — HOYTES (Helping Our Youth Through Education and Sports) Basketball completed another successful Labour Day Tournament at the St George’s Gymnasium over the weekend.

HOYTES’ coach Marci Demeritte said his team played up to their expectations.

“We really didn’t have any competition, but overall it was a good game,” said Demeritte, a former player in the programme who decided to give back to coach Gladstone ‘Moon’ McPhee, the organiser of the tournament.

Coach Neville ‘Manny’ Adderley, who played under McPhee when the Bahamas men’s national team participated in the Tournament of Americas, said their goal was to come here and repeat as champions.

“We only had five players here so fatigue started to set in and we couldn’t do as much things as we wanted to do,” he pointed out. “Again, I could lose this game, but I know the kids are learning something so it’s a win-win situation for us.”

Power 1, according to Adderley, is a three-semester club academy team that work on their fundamentals from September to December, from January to March they engage in a little bit of team play and from April to July they play in tournaments,

“We travel here, we go to AAU in Orlando and Vegas and we host our own tournament in the Easter Classic,” he revealed. “So we did it all in stages. In September, we go back to teaching them the basics.”

The Bearcats, based out of Meridian School and the AF Adderley Junior High, didn’t have any mercy in establishing control of the game.

Coach Wayde Adderley, who also considers McPhee a “father figure” in coaching, said it was good for them to get the exposure because his coaching staff got to see the things they have to work on.

“This is only the second tournament that they won as a group. We won a tournament last month, but there is still a lot of work to be done,” he said.

“We are still in the developmental stage. It’s just 11-12s, but it was great for us to come out and experience travelling and playing in a tournament on a different island.”

Craig Rickey, coach of Agape, said they played the same team earlier and they matched very well against them. “They targeted our best player and they managed to get him hurt. Once he was hurt, our other boys didn’t have anyone else to move to and that made it a lot harder for us,” he said.

The player had to be transported to the Rand Memorial Hospital for treatment with assistant coach Stefon Johnson. His status was not available.

Coach Kwasi Williams said they played as well as expected. “One of the things we wanted to work on was our defence,” he said. “I know my guys are some great scorers, so if we just focused on our defence at the end of the game, we could turn it around.”

Coach Buster Laing said it was a sign of a great team as they bounced back to win. “We were down 12 points at the half and 25 after three, but the game is not over until the final buzzer sound,” he said. “We played a full court press and the guys were resilient and they made the right plays and smart ball and we came out with the win.”

McPhee, who has organised this particular tournament for more than 15 years to coincide with the programmes that come under HOYTES, said although they had less teams this year, it was still a very good one. “The competition was good and the teams from the other Family Islands did a tremendous job, so I am very pleased,” he said. “Hopefully we can keep it up, but we really need sponsorship. If anyone wants to help our organisation, just call me. HOYTES need your help.”