Why One Mp Is Taking Against A Blooming Garden 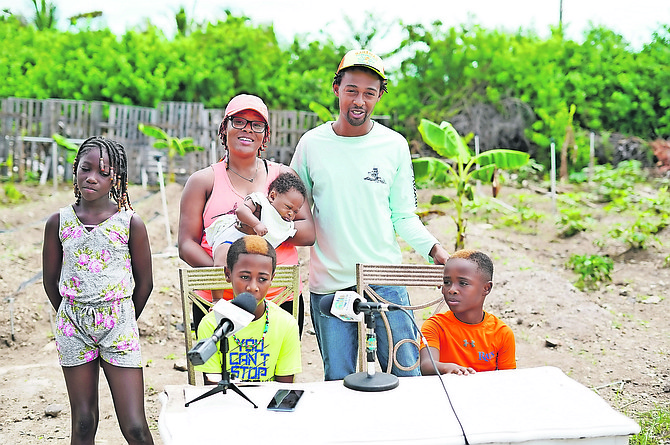 PINEWOOD Gardens MP Reuben Rahming yesterday slammed the cultivator of what he termed as an unauthorised community garden in his constituency, hitting out at the man’s attempt to have him pledge $25,000 for the further development of the property.

Speaking to reporters at the House of Assembly, Mr Rahming said he found Jerad Darville’s statement on the garden “amazing and quite frankly very offensive”.

Mr Rahming said last week in his budget debate speech, he spoke about an initiative for a community garden but not the project Mr Darville is calling the Pinewood Community Garden.

His comments came after Mr Darville, who said he is co-founder of community garden, held a press conference in the area pleading for MP Rahming to match the community’s $25,000 for further development of the area.

“I take this as no joke and no game. I warned (Jerad) to stand down. They heard some of the plans that I would (have) wanted to be done in the community and I’ve been seeking out land for the last two years...Water and Sewerage owned land,” Mr Rahming explained.

“…The reason why the property near his house that he is now calling community garden is developed because, as he said in the statement, it (was) a dumping ground that became a hazard, so we had Water and Sewerage come and clean it down.”

He claimed Mr Darville is using the land without proper approval.

“. . .I warned him that no MP has the authority to give anybody use of a government corporation’s land. For that to happen you have to go through processes and the board.”

He added: “This is political extortion. You think you are going to embarrass me into funding a project that has no legs (and) no backing. I don’t operate like that. Once I would (have) done my preliminary research and there are plans being drawn and everything else for everything I’ve launched in Pinewood. I called a community meeting, I pull people in and I let the community pull their leadership together.”

The Pinewood MP said the Pinewood Community Garden hasn’t been established yet and he would not “play with the emotions of the Pinewood residents”.

He said: “How in the world I can pledge $25,000 to Mr Jerad Darville because there is no such entity apart (from a) Facebook (page) called a Pinewood Community Garden. He got wind of it, (being) founded in the Pinewood Foundation that we are establishing and the Pinewood Association which is not political.

“It is a structure that is designed for businesses for everybody to operate in Pinewood (and) that work is being done by Sears and Co. Why would I pump $25,000 or make a promise to pump $25,000 into an individual (using government) land when my advice was stand down, don’t do it and it’s inappropriate?”

He added: “Let me tell you something, this isn’t no joke. I will come at you any means necessary... I am sick and tired of this nasty, vicious politics ... I’m tired of it and I’m tired of seeing people manipulated.”

Yesterday Mr Darville said the garden founders’ funds are exhausted and residents depend on the crops from the garden and he claimed Mr Rahming pledged financial assistance to the endeavour.

Mr Darville said: “With the financial pledge made to the community garden by our MP we were able to transform what once was a dump into an environment for persons in the community to depend on.

Agree with you.DDK. BUT look at all the language their MP has used on this enterprising family and the father Jared being told to.........."amazing and quite frankly very offensive"...."I take this as no joke, and no game. I warned (Jared) to stand down....."...."...I warned him..."....."This is political extortion. You think you are going to embarrass me into funding a project....."..."Let me tell you something, this isn't no joke, I will come at you be all means necessary,..."

Yeah, I'm not in support of how the MP is handling it.
If there's a problem with the land, then help them relocate somewhere more suitable. I think there should be more community gardens. That's a good idea.

Rahaming seems to be drunk with power.. The Bahamian people gave him the power so it should be all right,

Persons from other Countries squat on property all the time. but who really cares about that,

who wrote this headline????