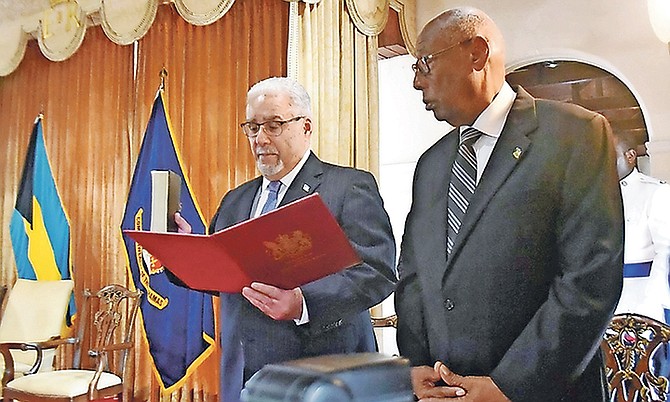 Brian Moree, QC, is sworn in as Chief Justice at Government House. Looking on is Cornelius A Smith, Deputy to the Governor General. Photo: Shawn Hanna/Tribune Staff

ADDRESSING delays in the legal system and a court backlog will be priorities for the country’s newest chief justice, Brian Moree, QC. He spoke to reporters shortly after he was sworn in as chief justice during a ceremony at Government House yesterday.

“It’s very humbling and I’m very grateful to have the opportunity to serve my country through this appointment,” he said. “I am profoundly of the view that we need in the private sector to be prepared to do some public service for our country. I see it as an opportunity in a small way to make a contribution to the ongoing development of the court system, the administration of justice and I would hope that at the end of it we would have left it just a little bit better than when we met it, but others would have to decide that at the appropriate time.”

Mr Moree was a senior partner at McKinney, Bancroft and Hughes. He did not specify his plans for the judiciary but foreshadowed significant reforms.

“The judiciary is a co-equal branch of government,” he said. “It’s not just another department. So we have got to see if we can get an allocation of resources which is consistent with the status of the judiciary under our constitution.

“We do need major reforms, we do need changes and we intend to address these challenges in the short term. I don’t think it’s going to be business as usual. We do have an agenda of items. We’re going to be working with all the stakeholders involved in the administration of justice to see if we could make some substantive changes to the way we conduct business at the present time.

“The only other thing I would say at this early stage is we seriously need to address the various public registers of the courts, what I call the back offices of the court. They are in need of substantial upgrading. We’re going to have to address that in the first several months going forward and we hope we will be able to make changes to make it efficient, convenient for the Bahamian public and it will also help us with case management as we seek out how we are going to move all the files and the papers and processes. Also, the magistrate’s courts are in need of major reforms and so we’re going to be speaking to the chief magistrate and her colleagues and see what we could do in the short-term.

“We’ve got to look at the delays and backlogs. Every court system in the world has a problem related to high volume and case load. We have to try look at that with fresh eyes and we expect to look at that over the next several months, come up with some new ideas about how to better manage that in order to deliver services to the Bahamian public in a better and more efficient way.”

Mr Moree said his team will assess the manpower needs of the judiciary.

“We’ll be assessing that and I’l be consulting with the chief magistrate, the judges and the various registrars to see whether we can come up with a proposal in terms of what resources and personal we need in order to improve our court system at the moment,” he said.

Wow! That's his opening salvo??!! Where the hell has he been the past three decades?

Nothing good can be expected to come from this appointment. He's fattened himself up really well with plenty of cake earned from private practice and now he gets to add icing to the cake from the public purse. I have deja vu thinking about Michael Barnett. Oh well, it is what it is.

Fortunately, Comrade Chief Justice Brian won't be needing someone to translate for him the guiding principals meaning of Ecclesiastes 3:1-8,
yes, no................activity principals he'll both be challenged on and frequently judged by........ God Bless you and your family comrade Brian, God save courts God save populaces respected Queen..........

"There is a time for everything, and a season for every activity atop Mount Fitzwilliam."

This man is not God's gift to the Bahamas. doc put him in place because of politics another very stable genius who will accomplish Zero. he is no smarter than those who have gone before him or those who will come after him.

All I know about him is he's a trump fan. That alone should disqualify him from being any kind of judge..... Head can't be right....

Moree's not just any Trump fan, he's a very big time Trump fan as is more than 80% of white Bahamians, Brent Symonette included. That's just plain common knowledge. As I've said over and over again about so many disappointing appointments made by Minnis, this is yet another shining example of our PM's inability to exercise good judgement.

ASTONISHING....BAHAMIAN trend....MANY highly regarded esteemed individuals.....will know...elaborate...IDENTIFY... of critically correctable errors, solvable problems, will be informed of egregious wrongs, .CAN GET DONE...an EASILY WITH MANY SUPPORTERS...... move da earth and BUT do little ..nothing...nada..................BUT....ONLY WHEN THEY ARE ELEVATED..elected...receiving higher position.......ONLY ...THEN.....CHANGES CAN BE EASILY DONE...BUT LITTLE ACCOMPLISHED.BELOW PAR...needs equipment...staff...ac not working...backlogs.....................AN.....True to form, ....AFTER..... DEMITTING OFFICE....RETIRING.......WILL DA ABSOLUTELLY...BESTEST SOLUTIONS, PLANS, BRILLIANT SOLUTIONS THEN COME OUT.......just read an see some of the gems which come out after the politicians are no longer on the scene..... Best of luck and high regard for new Chief Justice to accomplish major reforms.