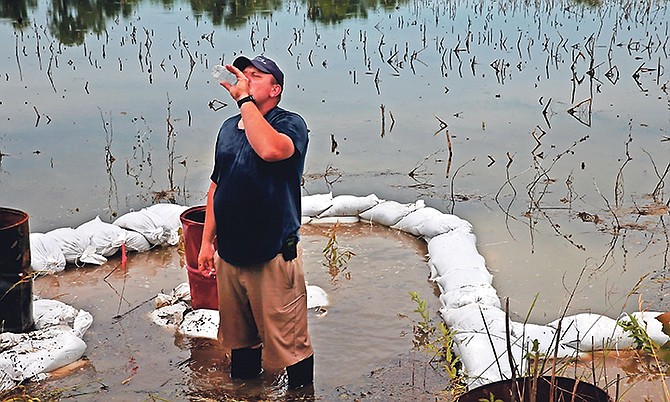 A Noah’s Ark situation is developing in the US midwest and the rest of the country is now starting to pay fairly close attention. Flooding from monsoon rains is plaguing agricultural and livestock farmers throughout the lower Mississippi and Arkansas River valleys, and thousands of other rural businesses are suffering. The month of May was the wettest ever in large parts of the US and the Mississippi River is reported to be cresting this week above St. Louis at its second highest level on record.

The situation is not good. And the larger problem is that if the mighty Mississippi is flooding that far north, trouble is sure to follow as the watery, muddy mass moves south through Memphis and Baton Rouge and on to New Orleans.

Meanwhile, even farther to the north, above the many flooded fields and desperate farmers of Iowa, Illinois and Missouri, rivers are also full. In and around Minneapolis, for instance, just a few hundred miles from the Mississippi’s source, the three rivers which are its principal early tributaries are all full. The Minnesota River is at or close to flood stage as it joins the Mississippi at Minneapolis. The St. Croix and Wisconsin Rivers are swollen also, and they also feed the Mississippi near Minneapolis. This summer will bring real hardship to those who make their living in the American centre.

But while much of the rest of the Mississippi valley and watershed may suffer, the river remains benign for Minnesota’s largest city. In Minneapolis itself and in neighbouring St. Paul, the Mississippi surges powerfully through the 19th Century spillway designed to tame the river’s only cataract, St Anthony Falls. The river courses around a couple of dozen of Minnesota’s famous 10,000 lakes on its way through the Twin Cities, dark and swirling below the dam despite a width of only about 150 yards. The river flows through a wooded gorge for several miles of some of the priciest real estate in the state of Minnesota.

But in these early days of summer and with months ahead of relief from the harsh winter which surely awaits them after Halloween, Minnesotans are enjoying June sunshine. In what locals and advertisers call the Northland, dawn breaks not long after 4.0am and the skies are often brilliantly clear. The heat and humidity will come later.

For now, it’s all good. The baseball Twins are winning far more regularly than anyone thought possible before the season began, and the football Vikings have just re-signed their talisman, a tight end who has anchored their offensive line for several years.

People are seriously out and about, whether on scooters or bicycles, running or walking, pushing a stroller or just texting in the warmth.

Even the self-proclaimed world’s largest shopping mall, the Mall of America, is not overcrowded, and most of its customers are tourists. This giant shopping mecca offers glass-topped relief from the elements outside, whatever the season. At its core is an impressive indoor amusement park featuring everything from bumper cars to several different opportunities to get flipped upside down. Located just off a major airport runway and near the spreading Minnesota River, the mall also features a variegated aquarium called Sea Life where admission is $26 for adults. It’s not Atlantis, but it’s comparable in some respects.

Cottonwood seed fluff turns the grassy areas white as thin early season snow now, and a sleek, curving, muscular new I-35 bridge slices through the air. The new span replaces an older, but not yet old, bridge carrying the busy interstate highway across the Mississippi.

The shocking collapse of that bridge, in August 2007, was an early warning thunderclap highlighting the urgent need to upgrade America’s road and transportation infrastructure. It was that need that remained unmet last week as President Trump and the Democratic Congress again failed to agree on funding for America’s roads and bridges.

Why you should be keeping an eye on Klobuchar

Minnesota won’t play the critical role of Midwest neighbours Wisconsin and Michigan in next year’s national US election, but it won’t be an afterthought, either. This is primarily because of its senior senator, Amy Klobuchar. Daughter of a legendary Minneapolis newspaper columnist and educated at Yale and the University of Chicago, Klobuchar stands out among national American politicians because of her evident commonsense and obvious sense of humour. Both qualities seem at times to be in rather short supply in the current Democratic field of nearly two dozen.

Because Minnesota is certain to support whomever wins the Democratic presidential nomination in 2020, interest in the state will centre on Klobuchar’s nomination prospects, either for president or, as now seems considerably more likely, as vice president on a ticket headed by a male candidate. There’s a long way to go until next November, but Klobuchar might stay close to the front all the way to the end. Her presence in the race will keep Minnesotans engaged, from the promise of spring to the cold harshness of the winter.

Canine agility trials have dogs and owners in step

In the green Wisconsin hills and swales 40 miles east of Minneapolis and across the St Croix River sits the Cedar Lake Speedway, a banked dirt track and giant earth-floored indoor arena which is home to a satellite NASCAR race series for sports cars, as well as other race series for motorcycles, monster trucks and virtually whatever other tricked-out specialty vehicles that enough people want to race. The speedway is a bustling commercial enterprise that provides both entertainment and employment for a region mostly looking west to the Twin Cities for both.

In the sunshine of early June, though, Cedar Lake has been taken over by a completely different type of competition, the kind that gives rise to the exclamation “Is this a great country, or what?”

For four days, the speedway was home to the 19th annual national CPE canine agility trials – not to be confused with the better-known fancy dog shows. Readers, especially dog-lovers, may be familiar with the televised Westminster Dog Show which appears on television every year. The dogs are often groomed to the eyeballs, trained to prance around the show ring at Madison Square Garden in New York City while their well-groomed handlers trot to keep up with them. The TV commentators try to keep things light while respecting the passion of their committed viewers.

Agility competition is different. The dogs aren’t bred or trained or groomed for show. Their task is to navigate a steeplechase-type circuit of hurdles, tunnels and weave poles within a certain prescribed time and without clipping the plastic hurdles or otherwise committing a foul. Neither the dogs nor the handlers are dressed for success in this competition. It’s all about speed and not missing one of the obstacles on the prescribed course.

The CPE (Canine Performance Events) nationals normally attract from 500 – 700 dogs and handlers. Sometimes the events are held at county fairgrounds, sometimes at speedways, sometimes at other venues. The key for the organising club is to locate a venue capable of providing indoor ring space and daytime residential accommodations – usually a soft-sided crate – for the dog, and space for the owner to while away the hours between events.

To describe agility dog owners as passionate and committed would be to understate their attachment to this fringe sport. This national event attracted participants from California and Maine, Florida and Idaho, Wisconsin and especially Texas, which was represented by several clubs willing to drive up I-35 for two days or more for the competition. It’s generally unabashed fun for all, particularly given that dogs and handlers are only competing against themselves and everyone, theoretically, could take home several winners ribbons.

And on the subject of competition, the event culture was notable for its lack of testosterone: A mutually supportive culture has arisen around the predominantly female demographic, and the few male competitors are quickly socialised.