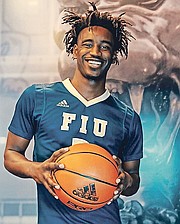 WILKENSON “Kenny” Isnord brought his recruitment process to an end and will begin his collegiate basketball career in south Florida next fall.

Isnord first started to receive high major offers from Division I programmes following his standout summer on the AAU circuit with Showtime Ballers during his junior season.

Scouts and pundits have raved about Isnord’s athletic ability impacting both ends of the floor.

Isnord reclassified to the 2019 class last summer and joined the Showtime Ballers AAU team for the current live recruitment period after playing alongside fellow Bahamian and Texas Longhorn Kai Jones on Team Breakdown.

Prior to his prep season at DME Academy, Isnord concluded his high school career with the Blanche Tigers in Pompano Beach, Florida. He was also named All-Broward Third Team for Boys’ 9A-7A Schools by the Sun Sentinel, and through 30 games he averaged 6.7 points, 6.4 rebounds and 2.2 blocks per game as the Tigers claimed the Class 8A state title.

Prior to his time at Blanche Ely, he played for J.P. Taravella High School and joined the stacked Florida Vipers Under-16 Amateur Athletic Union (AAU) team on the Under Armor Circuit.

Isnord rose up the Florida high school prospect rankings over the summer with an impressive start to his junior season began to field NCAA Division I offers.

“I plan to be a monster on both offence and defence next year, especially when it comes to rebounding. I want to do damage in the paint and around the arc. I want to make my presence felt on the court at all times,” he told Jake Perper ofprephoops.com.

“I’m looking forward to working on my handles a bit more and getting a better feel for the ball, also to improve my mid-range and outside jump shot. I also want to make smarter decisions with the basketball, so I would say improving my basketball IQ is going to be crucial for me.”