Jones Player Of The Week 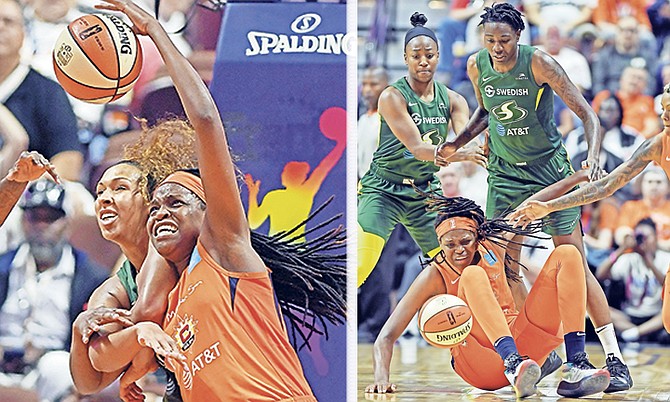 The Grand Bahama native shares the honours this week with Natasha Howard of the Seattle Storm, whom the Sun met the day before the recognition was given to both players, winning 81-67 at home at the Mohegan Sun Arena in Uncasville, Connecticut.

In that game on Father's Day (Sunday), Jones played 28 minutes and scored 13 points with 11 rebounds and six assists. Howard, in 33 minutes, finished with 20 points, eight rebounds and an assist.

Jones, 25, averaged 17.7 points per game and 1.67 blocks per game to clinch the Eastern Conference award for Connecticut as they posted a perfect 3-0 win-loss record during that span.

Now in her third year in the league, the 6-foot, 6-inch Jones was selected sixth overall in the first round of the 2016 WNBA Draft by the Los Angeles Sparks on April 14. She was eventually traded to Connecticut.

During her short sting in the WNBA, Jones has scored more than 754 points, grabbed 529 rebounds, had 88 blocks, 72 assists and 51 steals.

She has already set WNBA records with 403 rebounds, 11.9 rebounds per game and 280 defensive rebounds during the 2017 season.

Howard, on the other hand, earned her second Western Conference Player of the Week honours with 21.7 ppg, 9.3 rpg and 1.0 ppg.

The Storm, on the other hand, is 5-4 in third place in the west behind the Las Vegas Aces and the Los Angeles Sparks, both tied for the lead at 4-3.

Jones and the Sun are slated to be back in action on Friday when they take on the Atlanta Dream 7:30pm at the Wintrust Arena in Chicago.

The WNBA is also gearing up for its AT&T WNBA All-Star game on Saturday, July 27 in Las Vegas.

Jones is making a strong case for her first appearance in the mid-season showdown between the top players in the WNBA.