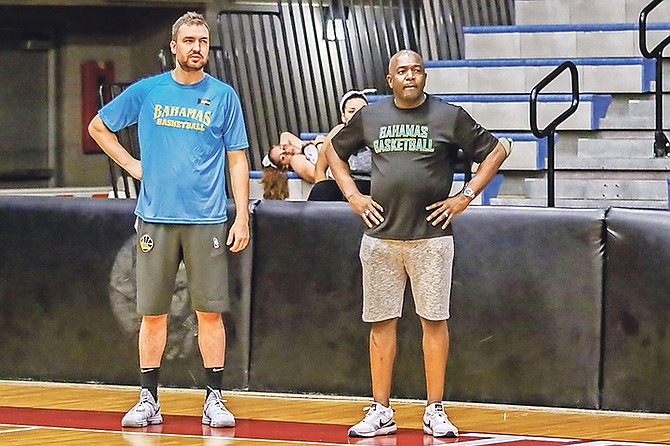 Chris DeMarco, one of the rising young assistant coaches in the National Basketball Association, has been appointed as the new head coach of the Bahamas Basketball Federation men's national team.

Newly elected BBF president Mario Bowleg said from their involvement with the Golden State Warriors' assistant coach during the qualifying rounds of the FIBA Americas Cup against the US Virgin Islands and the Dominican Republic, they felt they had found the right man for the job.

DeMarco, a former Dominican University (California) forward, has been with the Warriors for seven seasons, serving as an assistant coach, player development coach and team advance and video scout.

With DeMarco assisting head coach Steve Kerr, the Warriors won three NBA championships and played in five Finals during that span, losing out to the Toronto Raptors in six games in this year's finals on June 13.

While DeMarco will become the full-time head coach for the Bahamian team, Grand Bahamian Norris Bain will resume the responsibilities in his absence. Bain, the winningest coach in the Hugh Campbell Basketball Classic for senior boys high school teams with the Tabernacle Baptist Falcons, took over as head coach from Bowleg last year.

"Chris and Buddy Hield (shooting guard for the Sacramento Kings) were close friends and he suggested we sit down and talk with him about helping out the programme," Bowleg said.

"After conversations with him and getting him on board, from day one when he ran the practices, we felt that this was a young guy who was very knowledgeable about the game.

"With him being one of the bright and up and coming coaches in the NBA, the NBA was high on him and we even sat down with (Warriors' head coach) Steve Kerr and he was quite in agreement with the move. I assure you that within the next five years, I could see Chris DeMarco being an NBA head coach."

After consultation with Bain, who is now the associate head coach, Bowleg said they began the process.

"I think it was more exciting and beneficial for everyone because he brings a lot to the table and he can help me to make the next step to qualify," Bowleg said. "There may be some naysayers, but I don't care. I made the decision based on consultation with my executives.

"I made sure that coach Bain was quite pleased with the decision and I think Chris DeMarco, working along with Norris Bain and Kevin 'KJ' Johnson, can help those guys gain some experience so whenever the time comes for them to sit at the helm, they will be ready." 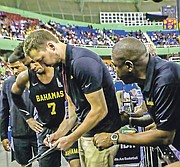 "On a daily basis, Chris works with the professional players and speaking with Deandre when he was home last week and Buddy Hield, they both feel that it's the best way for us to go," Bowleg said.

"I've spoken to a number of our players overseas and they all feel that this is the best chance that we have to move forward and they want to be a part of that with a coach who can control the talent that we have here now."

DeMarco will become the fourth foreign head coach of the Bahamas men's national team in recent times. He follows King Rice, who was invited by former NBA champion Rick Fox to coach the team from 2001-2004, Larry Brown, who coached from 2011-2012, and former Colorado State head coach Larry Eustachy, who coached the Bahamas to the CBC title in 2014.

With his introduction to the head coaching job of Team Bahamas taking place in August when he will hold a mini-camp at the Kendal Isaacs Gymnasium, DeMarco said he welcomes the opportunity with open arms.

"There is a lot of potential for growth. It's crazy the talent they have with only 400,000 (people)," he said. "It's a tremendous opportunity."

Mychal 'Sweet Bells' Thompson, a three-time NBA champion with the Lakers as well, endorsed DeMarco's elevation in the country. "It's great for the Bahamas getting a coach with championship experience at the highest level of basketball," said Thompson, whose son Klay plays for the Warriors. "He will bring a winning mentality and a great organiser."

Bowleg said they feel they have found the right person for the right time to mix the right chemistry between the players and coaches.

"We believe this is the right fit for us right now," Bowleg stated. "Yes, we've travelled with Larry Brown and there were players that had some problems with him and Larry Etuc. But I've seen the players have been highly accepted.

"After watching him the last summer, I feel he's the right fit for us right now."

No term of the agreement has been reached, but Bowleg said they hope that DeMarco can help the Bahamas qualify for the Americas Cup, the World Cup and eventually the Olympic Games, so they hope to keep him around.

On July 22, FIBA will hold the draw for the Americas Cup Qualifier to determine who the Bahamas will play in their pool in November. And they will use the mini-camp in August to select the team. In a home-and-away system in November and February, Bowleg said DeMarco and Bain will collaborate with the team.

The Bahamas also made it to the Tournament of the Americas under head coach Gladstone 'Moon' McPhee, but missed the chance to qualify for the Olympics as well.