Insight: Let’S Give It A Try – What A Cancer Survivor Told A Public Forum On Marijuana 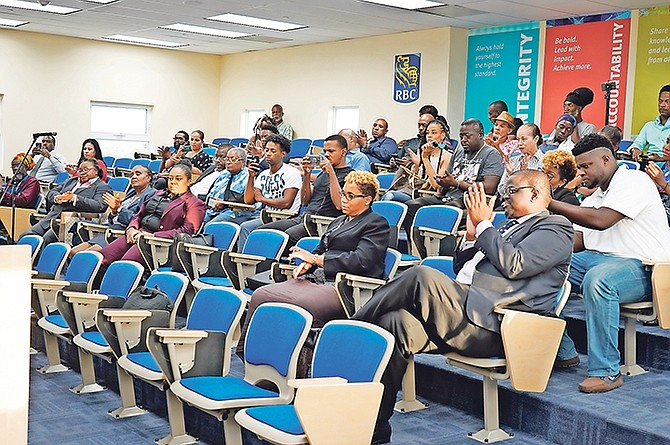 “LET’S give it a try,” is what 66-year-old breast cancer survivor Gloria Gilbert told panelists at a public forum on marijuana last week.

Mrs Gilbert was among attendees gathered at the University of the Bahamas’s RBC theatre for a talk hosted by the Bahamas Bar Association on the “Implications of Marijuana: Legalisation, Decriminalisation and Regulation”.

Mrs Gilbert credits plant-based treatments for keeping her in remission over the past five years, and told The Tribune while she did not use cannabis, her success with other plant-based therapies have reaffirmed her support for reform.

“I have chemo that brought me this close to death,” Mrs Gilbert said. “There is a particular treatment, it’s called the ‘red devil’ and I was told not to let my grandchildren that live with me use the same toilet that I use because that’s how poisonous it was.

“I’m telling you all of the cannabis or the plant or whatever could help somebody — I don’t know how many people saw people die with cancer, the pain, the suffering. If we could approve a poisonous drug that could help somebody, then I’m saying, my dear, let’s give it a try.

“If it could help somebody to go through,” she added, “live a little better. I believe it would also be a lot cheaper as well, and you wonder whether the pharmaceutical companies are talking against it because money is involved.”

At Thursday’s event, panelists included Bjorn Ferguson, attorney at BRF Chambers; Dr Indira Martin, biomedical scientist and director of the Public Health Lab; and Quinn McCartney, co-chair of the Bahamas National Commission on Marijuana. Mr McCartney’s role was largely to represent the commission, and he provided an overview of its efforts to codify Bahamian attitudes on the plant.

For his presentation, Mr Ferguson provided historical context to cannabis prohibition - which he underscored was not rooted in scientific research but racism. He pointed to the efforts of Harry Anslinger - the first commissioner of the US Treasury Department’s Federal Bureau of Narcotics. Mr Anslinger played an instrumental role in cannabis prohibition, and led policies and propaganda campaigns disproportionally targeted blacks and Mexicans.

Mr Ferguson noted the introduction of marijuana to the Caribbean by Indians, who were brought to the region as indentured servants and called the plant “ganja”.

He noted the findings of subsequent commissions on marijuana, dating back to the Indian hemp commission in 1893, that supported decriminalisation.

Mr Ferguson said there was no excuse for the country’s stalled track to reform, and characterised the current partnership between the United States and the Bahamas to enforce prohibition as hypocritical and unjust.

“Medicinal marijuana I will accept that it may be tricky in terms of the standardisation of a particular strain and plant...we need to make up our minds with the legalisation, but decriminalisation should happen today. I don’t know why we’re playing with the issue but it’s very clear that we’re destroying many of our young men in this current regime and it’s no excuse why we’re not addressing the issue.

“[The United States], they have taken an approach that decriminalise marijuana [in some states], yet in the Bahamas we allow American law enforcement agencies to come here and assist us in criminalising our citizens...something is wrong with that fundamentally.”

Mr Ferguson continued: “We have tourists coming into the country with marijuana convictions, we welcome them here as tourists. When a young man wants to travel to the US, he has simple possession or something on his record, he’s denied a visa. That’s not rocket science, something is wrong with that, that is unjust and we continue to support America with this false narrative with the ‘war on drugs’, in particular marijuana.”

Mr Ferguson also underscored the plight of Rastafarian community in the 1970s as the group was heavily targeted for their religious use of the plant. Retired legal scholar Arthur Dion Hanna Jr, an attendee, told the panel when the plant is regulated - which he noted was inevitable - there should be some space given to Rastafarians for their long suffering and economic survival.

In her presentation, Dr Martin theorised cannabis reform could be modeled for excellence in biomedicine and equitable wealth distribution.

She lauded the efforts of Jamaican scientists like Dr Henry Lowe who pioneered medical research of the plant and have committed themselves to using their work to uplift their country. Dr Martin explained there was conclusive or substantial clinical evidence of medical treatments for chronic pain, chemotherapy induced nausea and vomiting, and spasms brought on by multiple sclerosis; moderate evidence to support its use for short term sleep disturbances and asthma; and limited evidence for its use with appetite and weight loss due to HIV/AIDS, anxiety, post-traumatic stress disorder, dementia/Alzheimer’s and glaucoma. She said there was insufficient clinical evidence for its use in treatment for cancers, irritable bowel syndrome, epilepsy, amytrophic lateral sclerosis, and schizophrenia.

“I think that any model of cannabis utilisation, research, sale, or what not at the end of the day,” Dr Martin said, “it should come back to the overall benefit of the community as a whole because of a lot of innovation in cannabis actually came out of the community.”

Dr Martin noted other examples of traditional medicine being transformed by the West - aspirin, which came from the Amazon rainforest, and more recently Ibogaine, derived from West African shrub Iboga and used to treat drug addiction.

Taking participants through a crash course in the plant’s biology, Dr Martin noted the nutritional prowess of hemp - one of the richest sources of healthy fats for people who do not consume egg or fish. She explained much of the public health concerns from North America and Europe are related to high THC strains; however, she said there has been no change in schizophrenia prevalence between 1996 and 2005 despite rising THC concentrations. Dr Martin also noted research indicating a drop in opioid deaths in states that have legalised medical marijuana.

“There are numerous examples where traditional medicine has given rise to efficacious health solutions that have then been adapted, adopted, thief, by the West and commodified and at the end of the day the people who for many centuries have been developing this traditional biomedicine they are never given any financial benefit,” Dr Martin said.

Another attendee, Dr Patti Symonette, urged the commission to ensure it maintained a clear distinction between hemp and marijuana as it conducted its public forums. Dr Symonette, a board member of the Bahamas Anti-Doping Commission, noted there were still products on store shelves that were hemp-derived, and questioned the continued criminalisation of the cannabis plant despite proven health benefits.

“Sometimes we have a habit of mixing up things,” she said, “women don’t want their freedom because it mix up with something else.”

“The science is new for a lot of people, even people in the conventional medical community. They are totally confused if they think hemp should be criminalised because there is no psychoactive component to hemp.”

Dr Symonette also said: “People have to understand that because if we go to them confusing and mixing up the two and not clarifying the position that will lead to further chaos.”

Dr Symonette called for officials to stop using the word “marijuana” in the criminal context, as it sought to disenfranchise cannabis from other healing plants like rosemary or turmeric.

The BNCM is expected to present its report to Cabinet in August, however, its co-chair told attendees on Thursday night that the commission’s fact-finding mission to Canada is tentatively set for September.

For his part, Mr McCartney told attendees: “We are closer to the finish line than you think.”

He encouraged all Bahamians to submit their opinions to the commission by email.

The commission’s email is info@bahamasncm.com

Marijuana was made illegal due to nothing but lies, not one reason used to make it illegal was true, not one. And look at all the bull we have to go thru to legalize it. This is crazy...