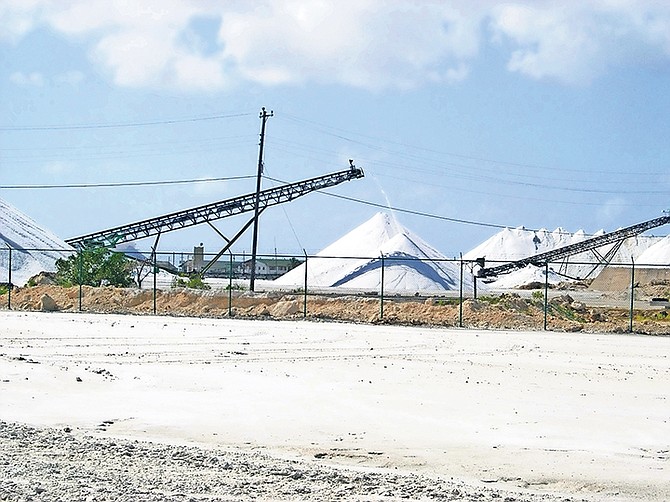 Morton Salt’s line staff union is accusing the salt harvester of using its threatened employee “lock-out” as a “union-busting” tactic.

With Inagua’s largest employer set to shut all members of the Bahamas Industrial, Manufacturers & Allied Workers Union (BIMAWU) out of the plant unless the two sides can reach a “happy medium” in their industrial agreement talks by July 3, the union said it had “grave concern” over the motivation for Morton Salt’s threatened action.

The BIMAWU, in a statement, said the workers were “already frustrated” after being informed of the company’s lock-out plans and 15-day ultimatum to agree acceptable industrial terms.

“The union has a grave concern when the managerial staff is telling workers that, when the company locks the gate, they plan to weed out all of the trouble makers and outspoken persons. That is union busting,” the union alleged.

Calls and e-mails to Morton Salt’s spokesperson seeking comment were not returned before press deadline. Similarly attempts to contact both Dion Foulkes, minister of labour, and John Pinder, director of labour, were also unsuccessful, as were efforts to reach the island’s MP, Miriam Emmanuel.

The BIMAWU, meanwhile, questioned whether the government would stand idly by and allow the workers’ livelihoods to threatened, urging the Minnis administration to intervene in the dispute.

The situation has already been seized on by its political opponents, with PLP chairman, Fred Mitchell, expressing “alarm” at the potential consequences if the situation was left unresolved.

Mr Mitchell warned that Morton Salt’s threatened lock-out will “essentially bring that island’s economy to a standstill, and the misery index off the charts for employees and residents there”.

He added: “I cautioned this intransigent FNM government that Inagua is a company town, and that more must be done by the labour minister to diffuse this volatile situation on that island. The relaxed and cavalier attitude of this government is partly responsible for this crisis in Inagua.

“I call on the government yet again to become more actively engaged in this negotiation in the public interest. The employees and the island generally cannot afford a lockout.”

The latest escalation occurred after Morton Salt, in a letter exposing its growing exasperation and frustration over the two sides’ “impasse”, last week accused the line staff union representing more than 100 of its workers of failing to negotiate “in good faith” and disrupting “the economic viability” of its Bahamian operations.

Morton Salt executive, Christopher Getaz, told Jennifer Brown, the BIMAWU president, that her members will be locked out of its facilities from July 3 unless the company received a reply indicating the two sides can reach a “happy medium” over a new industrial agreement.

Noting the union’s possession of a strike certificate, and previous threats of industrial action, Mr Getaz also blamed reduced productivity and work slowdowns on the BIMAWU’s influence, and suggested that the “lock-out” was required to redress the negotiating balance.

These actions, he alleged, included “an operating deficit in all harvest levels” on a daily, weekly, monthly and year-to-date basis to February 22, 2019; “significantly lower boat loading rates” in February and March; and a “reduction to lowest loading rates”, which caused “significant costs and placed the company at risk of missing the contract for de-icing salt” around early March.

“The foregoing requires the company to consider whether, in the declared industrial action climate, it is necessary for the company to lock employees out of the plant in furtherance of the company’s bargaining objectives in negotiations for a new industrial agreement,” Mr Getaz told the union.

Mr Getaz added that the company’s June 13 offer to the union was its “best and final” position, and said: “The company is not in a position to make further offers.”

In response, the union’s Ms Brown told this newspaper that Inagua would become “a ghost town” should Morton Salt follow through with its staff lock-out threat. She added that while the BIMAWU wanted an industrial deal it would “not sign for stupidness”.

Obie Ferguson, the Trades Union Congress (TUC) president, and attorney and chief negotiator for the BIMAWU, last week argued that Morton Salt’s proposal was a “deficit industrial agreement” and called for salary increases that matched the inflation rate.

Explaining what he meant, the TUC chief said the base salary increases offered to workers over the proposed industrial agreement’s three-year term - 1.5 percent for each of the first two years, and 1.9 percent for the final year - were lower than the current rate of inflation and cost of living increases, which have both been impacted by last year’s VAT rate hike.

And, Mr Ferguson argued, the increase in staff contributions to their health insurance coverage would more than offset the positive effect from salary increases. “The increase in insurance would give you what I call a deficit industrial agreement, a negative,” he told this newspaper.