Face To Face: Atarah On The Path To Finding The Top Talent 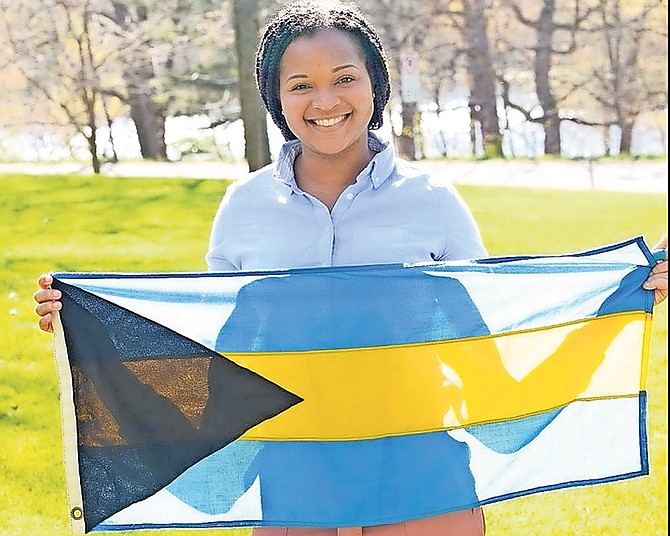 Atarah Pinder at the College of St Benedict campus. 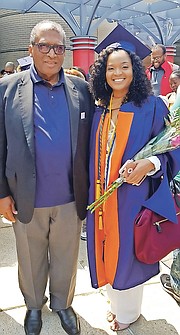 Atarah and her uncle, Most Rev Archbishop Patrick Pinder, at Morgan State graduation.

Nearly 50 Bahamians in a crowd of 10,000 people attending Morgan State University came to a thunderous applause when Atarah Pinder, Jamielle Davis, Michaela Thompson and a few other Bahamian students walked across the stage to receive their awards. Atarah received a Masters degree in Business Administration with honours while Jamielle was named Summa Cum Laude with a Bachelor of Science degree in Accounting and Marketing, both achieving a 4.0 grade point average. A proud Dr Jacinta Higgs contacted me to feature these young ladies after she returned from Baltimore as a part of the team supporting the girls. Both ladies have so much to share that I decided to cover the roads they took to their current success in separate columns. This week, we take a look at Atarah Pinder.

Atarah was born in Nassau to Allyson Crawley and Samuel Pinder and first attended Dayspring Academy, then Nassau Christian Academy. She then moved to St. Augustine’s College and graduated with honours in 2012. She spent a year at the College of the Bahamas, enrolled in the Biology programme with a pre-med track. She took an elective class in psychology during her second semester and this is where her interest in psychology was piqued.

She then headed off to the College of St Benedict & St John’s University in Minnesota. While there, Atarah was heavily involved on campus and within the community serving as a Resident Assistant, Co-President of the Archipelago Caribbean Association and as a Volunteer Youth Mentor at the Boys and Girls Club of Minnesota. During her first year, she was selected as a member of the Hynes Scholar Programme, a year-long cohort-based programme that explored gender, leadership and the opportunities and challenges of being women in today’s society. During her sophomore year, she was selected as a Psychology Research Fellow where she conducted high-level personality research on the 2016 Presidential Candidates. From this opportunity, Atarah was also able to publish two articles in the St Cloud Times based on her research. In her junior year, she was inducted into the Psi Chi Honour Society where she served on the Executive Board. She graduated Magna Cum Laude in 2016.

Atarah then settled in Baltimore, Maryland where she worked in the Human Resource department of the second largest healthcare system in the state. After some time, she decided to pursue a Master of Business Administration degree at the Earl G Graves School of Business and Management at Morgan State University. While in her two-year programme, Atarah has been inducted into the Beta Gamma Sigma Honour Society and Sigma Nu Tau Entrepreneurship Honour Society. She has served as a Graduate Assistant in the Graves Masters Office and on the board of the Masters Programmes Student Government Association. This May, Atarah graduated and received honours for graduating at the top of her programme with a 4.0 grade point average. She is currently studying for her PHR exam. The PHR is an HR certification. It stands for Professional in Human Resources and is awarded by the Human Resource Certification Institute (HRCI) after successfully passing the exam. She is now deciding between professional opportunities offered and available to her.

“At that time, it was the nature versus nurture argument that piqued my interest the most,” Atarah said. “I never wanted to be a clinical psychologist/therapist, but I always wanted to use the principles of psychology to improve traditional practices. For example, I’m quite interested in Industrial/Organisational Psychology and I want to use the principles from the field to help organisations find ideal candidates for positions within their organisations. There is a lot of research that talks about how traditional means used to select candidates (like the job interview) do not work... and a lot of times do not yield the best candidates for either positions or organisations. This is how I tie together my psychology degree, my MBA and my interest in human resources. I want to be apart of the conversation within organisations in finding the alternative methods used to finding talent and then helping these same organisations to implement and train on new methods.”

Before settling in Baltimore, Atarah found herself on the other side of the world. She travelled to Bosnia & Herzegovina where she volunteered with a youth non-governmental organisation called Zdravo Da Ste. While there, she assisted in implementing and organising programme strategies to aid in the development of vulnerable youth based on psychological principles. She also assisted in the grant writing process to secure funding from the European Union.

“While in Bosnia, I was able to learn about the Bosnian war and see the effects that the war still has on the country today,” she said. “I talked with a number of people, some of whom were children when the war started, about how the war shaped and changed their lives. They were always difficult conversations to have, but they taught me a lot about how to support others while recounting their pain.”

She feels the experience taught her how to be confident and comfortable in unfamiliar environments.

Atarah and her family at graduation day, College of St Benedict.

Atarah performed well in school from a very young age, so her path to success is one that was built by doing well every step of the way. She loves learning. Looking back, she believes that “maintaining a growth mindset, discipline, persistence and confidence in self” are key factors in determining your trajectory.

“I’ve always done well in school,” says Atarah. “I don’t really remember my exact grades in primary school, but I do remember being among the top achievers in my class, and I graduated from SAC with high honours. I’ve always genuinely enjoyed learning. In college, especially being away from home, it gets a little harder because your support system is further away and you have the freedom to pretty much do whatever you like. But I always tried to remember why I was there. The ‘why’ is what always kept me grounded and focused. Really, I just would prioritise my studies making sure to get whatever assignments are due done and tests studied for. After those things were done, then I allowed myself to do whatever I wanted to do, whether that be catching up on shows, hanging out with friends, or reading leisurely.”

Atarah’s closest support system includes her mother as well as her aunt, Paulette Turnquest and uncle the Most Reverend Patrick Pinder, Archbishop of the Catholic Diocese of Nassau.

She gave this advice to students: “I don’t think I can offer a specific key to good grades. Everyone is different and has to find what works for them. It may be difficult to find whatever it is that does (work for them), but students should keep trying. They should stay focused, consistent and disciplined, study well and always do their very best.”