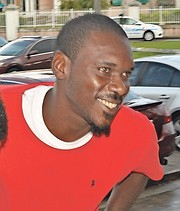 A MAN who pleaded guilty to possession of a firearm and ammunition at his arraignment in the Freeport Magistrate’s Court yesterday was fined $16,000 or, in default he must spend 18 months in prison.

Kingsley Cooper, 28, of Scott Avenue, appeared before Deputy Chief Magistrate Debbye Ferguson where he was charged with firearm possession. It is alleged that on June 22 at Freeport, he was found in possession of an Austrian Glock .9mm pistol for which he did not have a licence.

Cooper was also charged with possession of 11 rounds of .9mm ammunition.

He pleaded guilty to both charges.

According to the prosecutor, on the date in question around 3.35am, Officers McKenzie and Rolle acted on information received and proceeded to Club Liquid located at Les Fountain, where they spoke with Corporal Rolle who gave them certain information. As a result, the two officers approached the accused and conducted a search, recovering a firearm from his right front pocket.

The accused was arrested. While in custody, the prosecutor said the accused admitted to possessing the firearm and ammunition, which he said that he found in bushes.

The judged asked Cooper why was he carrying a firearm in the club and where did he find it. He told the judge he found it in bushes in the Mayfield Park area. “I was not going to shoot no one with it,” he said.

The judge said: “You have a gun in your possession in a public area. What if someone had gotten you vex or annoyed you?”

Deputy Chief Magistrate Ferguson told Cooper that since he saved the court some time by pleading guilty she would not impose the maximum penalty.

She told Cooper that if he fails to pay the fine, he will have to serve 18 months imprisonment consecutively on both counts.