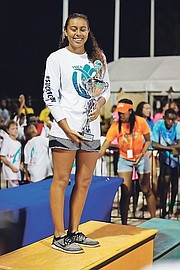 Grand Bahamian Joanna Evans, home from her preparation for her professional career, surpassed the FINA World Championships’ B cut of two minutes and 02.81 seconds by touching the wall in 2:01.55 in the girls’ 15-and-over 200 metre freestyle.

Evans, however, said she intends to bypass the XVIII Pan Am, set for July 26 to August 11, and will be focusing on the World Championship, scheduled for July 12-28 in Gwangju, South Korea in her quest to qualify for the 2020 Olympic Games in Tokyo, Japan.

Davante Carey, the 16-year-old rising star, made his presence felt with his second place finish in 25.03.

Meanwhile Laura Morley, home to compete for Mako, made the A cut for the Pan American Games in the girls’ 15-and-over 200m individual medley in two minutes and 19.0 seconds. The A standard is 2:19.99.

Two competitors also achieved the Pan Am B standard in the boys’ 15-and-over 100m freestyle of 52.79.

Girls 11-12 - Leylah Knowles of Alpha Aquatics finished with 61, well ahead of runner-up Seannia Norville-Smith of the YMCA WaveRunners with 50.50.

Girls 13-14 - Delaney Mizell of the Lyford Cay Club with 55, three more than runner-up Zaylie-Elizabeth Thompson of Alpha with 52.

Boys 11-12 - Marvin Johnson of the YMCA WaveRunners with 63 over Tristin Ferguson of Mako Aquatics Club with 57.

Girls 15-and-over - Katelyn Cabral of YMCA WaveRunners with 48 over Margaret Higgs, unattached, with 43.