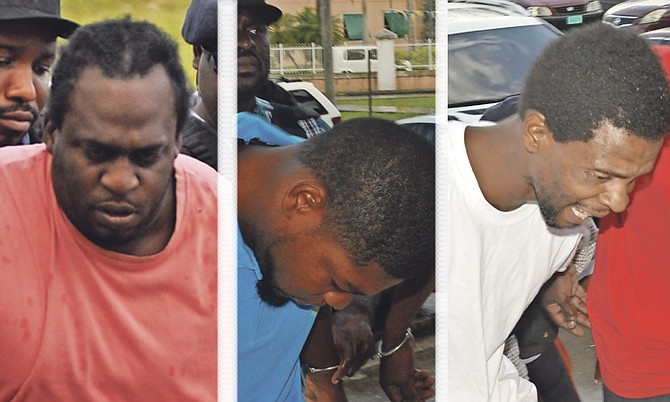 THREE Grand Bahama men were charged in the Freeport Magistrate’s Court yesterday in connection with a break-in at the Solomon’s Wholesale store, where over $50,000 was stolen from a bank ATM machine.

Moss, a father of four, pleaded guilty to all five charges against him in connection with the break-in, including shop breaking, stealing, causing damage, and two counts of possession of proceeds of criminal conduct. He was sentenced to five years and four months in prison.

On Friday, June 14, at Freeport, an employee of Solomon’s at Queen’s Highway arrived to work and discovered damage to the store in the amount of $27,160. It was also discovered that someone had removed the First Caribbean International Bank ATM valued at $40,000, and had stolen $51,210 of mixed Bahamian currency from it.

It is alleged that Moss and others broke into Solomon’s with intent to steal. It is also alleged that he and others stole $51,210 cash, of which $36,116 still remains unaccounted for and that he alone caused material damage to the ATM.

He pleaded guilty to all the charges.

It is also alleged that sometime between June 14 and June 17, he possessed goods valued at $294.57, the proceeds of criminal conduct.

Fulford pleaded not guilty to both charges and elected summary trial. The matters were adjourned to October 10. He was granted $5,000 bail with two sureties.

Prosecutor Veron Rolle said that based on the record of interview given by Patstille, the accused stated that he received the funds from Moss. Mr Rolle asked that the $10,000 be forfeited to the Crown, and made an application requesting for the charge to be withdrawn against Patstille.

Magistrate Ferguson informed Simone Brown that the charge against her client, Patstille, was dismissed. She indicated that the $10,000, the property of First Caribbean International Bank, is to be forfeited to the Crown, and it would be determined at some other date as to where the money will end up.

In a separate matter, Moss was also charged with two counts of causing material damage.

He pleaded guilty to the charges.

Additionally, Moss was charged with stealing. It is alleged that between June 13 and 14, he stole a white 2000 GMC Sierra 1500 truck, valued at $6,000, the property of B&B Trucking. He pleaded guilty to the offence and elected summary trial.

In reference to a traffic matter, Moss was also charged with driving a motor vehicle with an obscured licence disc. It is alleged that incident occurred on February 3, 2018. He pleaded guilty.

When asked to address the court on sentencing in reference to Moss, the prosecutor indicated that due to the number of charges and damage caused to various properties, he recommended seven years imprisonment for all the matters.

Ms Brown presented a mitigating plea on behalf of Moss. She noted that while they are dealing with a number of matters, the court must still take into consideration the “brave step” taken by Moss in pleading guilty.

“He has spared the court the time and resources by not dragging out the matter in the court,” she argued.

She noted that in view of him pleading guilty at the earliest opportunity, Moss should receive some discount on every single charge. She also added that he has no previous convictions of a similar nature.

Moss begged the judge to have mercy on him in passing sentence.

“I have four little children, including a seven months old and a one-year-old; I want to be a part of their life when they growing up. I ask you to have mercy on me,” he said.

Deputy Chief Magistrate Ferguson told Moss that she took into consideration the fact that he did not waste the court’s time by pleading guilty, and that he is the father of very young children.

“I saw your criminal record, but paid no attention to it,” she said. “Based on my sentence, I looked at how egregious the offence is, and I marry that to what I think is equitable for you,” she said.

She convicted him on the shop breaking charge and sentenced him to one year imprisonment.

On the stealing charge, she noted that he stole $51,210, and said if he returned the balance of $36,116, which is compensation to the virtual complainant, instead of six consecutive months, he will only serve four months in prison. She said the balance must be paid by June 27. If it is not paid, the judge said he will serve six months on that count.

On the causing damage count regarding the ATM machine, the judge ordered Moss to compensate the FCIB the $40,000 by June 27 or service six consecutive months. If he pays he will only serve four months on that count.

On the charges of causing damage to two motor vehicles, the judge ordered Moss to pay compensation of $13,066.10 and serve five months, or in default serve six months.

On causing damage in the amount of $1,057.93, Magistrate Ferguson ordered Moss to pay compensation by June 28 and five months, or in default serve six months.

In reference to the vehicle theft from B&B Trucking, Moss was ordered to pay compensation for any damage and serve six months. His sentences are to run consecutively.