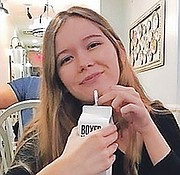 Jordan Lindsey was killed by sharks on Wednesday.

“IT won’t stop me from going in the water,” Donna McHugh, a visitor from Massachusetts, said of Wednesday’s fatal shark attack.

Ms McHugh, a mother of two children, was among the visitors The Tribune interviewed on Friday while canvassing Cabbage Beach, following an advisory from the Ministry of Agriculture and Marine Resources that warned the public to “exercise extreme caution” while “in and around” the waters of New Providence, Rose Island, and Paradise Island.

Like Ms McHugh, the tourists regretted Wednesday’s tragedy, which claimed the life of 21-year-old Jordan Lindsey, a young woman from California who was killed by sharks while snorkelling with her family in the waters near Rose Island.

However, the guests underscored their belief that the tragedy was an accident and overwhelmingly told The Tribune it will not stop them from enjoying the beach. If anything, a number reported the incident increased their sense of awareness and encouraged them to become more educated.

Ms McHugh said she has been visiting The Bahamas three times a year for over a decade.

“I always thought The Bahamas is pretty safe,” she told The Tribune. “I’m not concerned about going in the water here (Cabbage Beach), but I have snorkelled in the water at Rose Island.”

Ms McHugh added that she was informed that it is currently mating season for sharks.

“I didn’t know it was mating season so maybe that’s why (the accident occurred). It won’t stop me from going in the water but it will stop me from snorkelling this time of year and stop the kids,” she said. “It causes me to be more educated, do more research.”

Fred, a visitor from Virginia, said he was on a snorkelling expedition to Rose Island on Wednesday – one hour before the tragedy occurred.

“Everything seemed fine, no safety concerns. It was a nice time,” Fred said of his tour experience.

Fred said he saw no sharks, but added other tour boats were feeding bread to the fish.

When asked if the attack is making him have any concerns about snorkelling in The Bahamas, he replied: “It scares me a little bit. If people are feeding the fish, I’m not going out there. But otherwise I’d still go out there.”

However, he said he had “no concerns” about being in the water on Friday. He added there have been shark attacks in the water in Virginia, where he lives.

Laruen Whitt, of Colorado, said she snorkelled in the Rose Island area last week. She noted she has been visiting The Bahamas with her family for over two decades.

“We’ve been coming here for the past 22 years and still believe The Bahamas is one of the most beautiful places to visit. We will continue to come.”

Alex and Daniella, visitors from New Jersey, said they went in the water yesterday, “no issue”.

Adding the matter is still “concerning”, they added: “It’s good to be aware of what’s going on.”

“A beautiful, gentle soul” is how Lindsey’s family described the young woman who was tragically killed.

“Jordan was 21 and such a great daughter and person. We already miss her terribly,” Lindsey’s father, Michael Lindsey, told ABC News.

“She said it happened so fast, and no one yelled anything. My wife got to Jordan and pulled Jordan to shore by herself. The medical staff said they still had to do an autopsy. My wife said no one told her there were three sharks.”

Lindsey’s right arm was torn off and her left arm, both legs, and buttocks were bitten, according to the ABC article.

Following the tragedy, the Ministry of Agriculture and Marine Resources issued a public advisory.

“The public is further advised to avoid the cleaning or discarding of fish waste in the water as this practice attracts sharks into areas often utilised for swimming by the public and our guests. Further, if a shark is seen in the swimming area, persons are advised to leave the water and in no circumstance molest or play with the animal.

“Also, if injured and bleeding while in the water, it is recommended that you leave the water as sharks are attracted to blood.

“The public is encouraged to report all sightings to the Public Authority.”

We should keep living and continue to educate ourselves . It is not the shark's fault. To be honest, I don't know why shark dives are legal; they should not be. They should be left alone. We are conflicted as a people, though. The BNT said not to kill sharks in respect to what happened,but tell you to kill the Lion fish, on the other hand, if a Pit Bull dog mauls a person, the dog is put to death. Why does the BNT not speak out when the police puts a dog down? What is the protocol for these situations? Kill a Pitbull, don't kill the shark, kill the Lion fish? We have banned the import of an American staffordshire terrier , but no ban on chumming, feeding, or diving with sharks. How crazy.

A. Lion fish are an invasive species from Asia. They destroy the native fish population. B. You can identify an individual pit bull that has mauled a person, but you cannot track down the individual shark in the water that mauled a swimmer. The two situations are not comparable.

Good points, plus invasive species don't have any natural predators to keep their population under control.

Clamshell, i take your point about tracking down a shark, however, can you tract down a lionfish? And this invasive species is threatening our livelihood , is a shark attack not threatening our tourism sector?So, i respectfully say that they are comparable.

My reference was mainly to your pit bull comparison. But, actually, yes ... unlike sharks, lionfish will hang out on the same piece of reef for weeks on end. I’ve speared them and eaten them ... they are easy to hunt and very tasty. Sharks have always been with us, the lionfish have not. And, respectfully, despite this recent tragedy, shark attacks remain very rare and there is no evidence they are threatening tourism.

Another big difference in the pitbull analogy is that sharks are already eaten by other creatures... from babies to adults.
So shark populations are already being killed naturally by the marine ecosystem.
Then on top of that humans kills sharks as well for food. So their populations get reduced by many factors.
Pitbulls don't face these issues, the situation with the police is extremely rare in comparison.

I also think that we would have international and local discussions for months if the three sharks were captured. Do you think the BNT would condone the killing of three sharks or have them shipped somewhere in the Atlantic Ocean. i can assure you that they would be under pressure to have them released in the Atlantic as opposed to euthanizing them. Pitbulls , on the other hand, are euthanized without a word from BNT. BNt does not come to their rescue, they let the police handle it.

BNT does not have clean hands .......... It answers to its global partners, lobbyists, and donors.

The shark diving operations have friends in high places as well ......