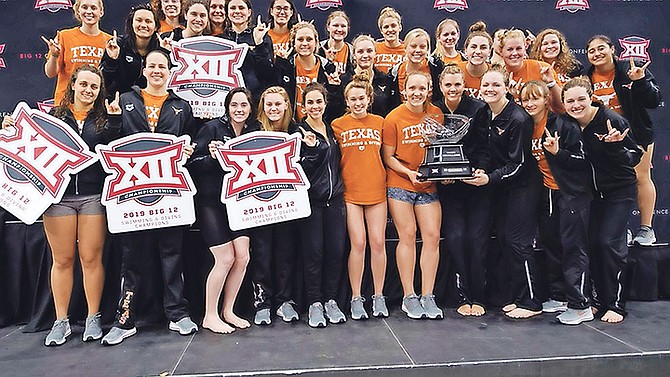 Joanna Evans, second from left in front row, with the second-ranked University of Texas women’s swimming and diving team after winning their seventh-straight Big 12 title on Saturday night.

Evans’ coach Matt Scoggin was named Big 12 Diving Coach of the Meet for the seventh-straight time and 16th overall.

Meanwhile, Alsion Gibson was named the Women’s Diver of the Meet for her repeat performance on the one-metre diving for her third career Big 12 title.

In addition, Grace Ariola was named the Women’s Newcomer of the Meet after she was a member of four relays that won Big 12 titles and took the 50 freestyle in her first Big 12 Conference Championships as a Longhorn.