Face To Face: Following In The Footsteps Of The King 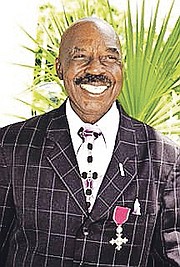 Eric Gibson is a household name. The moment a Bahamian hears it, the title “King” precedes it in their mind. King Eric & His Knights were a popular calypso band in The Bahamas since their inception in 1957, a time when music legend Harry Belafonte released his “Calypso” album which received much international acclaim.

King Eric & His Knights specialised in this modernised type of Calypso music. The band regularly performed at nightclubs and hotels, where their records were in high demand by both tourists and locals.

Between 1960 and 1978, King Eric led the band to ten albums, including: Calypso Encores (with Ronnie Butler), Paging King Eric & His Knights, Bahama Goombay Summer, and Island Boy. In 1966, he opened a recording studio to support other native Bahamian musicians.

By 1973 the year of Independence, King Eric formed the “King & Knights Club” - a venue that not only featured the band, but a variety show that included carnival-style entertainment such as fire juggling and limbo dancing. 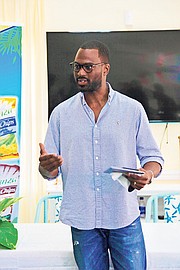 Eric giving a presentation on the effectiveness of social media.

King Eric & His Knights also enjoyed popularity outside of The Bahamas, touring in North America and Australia. Years after the popularity of calypso dwindled, King Eric’s name still rang out in Bahamian homes because he was considered a semi-official Bahamian “Ambassador of Goodwill” and was active in the regatta, maintaining a successful racing sloop. Although he died in 2013, he left an indelible mark on Bahamian culture.

Today his grandson, Eric III, is making a name for himself that may result in the name Eric Gibson being well-known in the country for other reasons. Eric Gibson III is a branding and advertising consultant who specialises in using online platforms and social media to significantly boost his clients’ business. He started his consulting agency, BRAND300, back in 2011 while living in Florida.

He says the culture of his business stems from three key ingredients – strategy, creativity and innovation. He helps small businesses and entrepreneurs effectively communicate with their niche target audience by leveraging intent-based branding and advertising techniques on social media. Bahamian businesses are still catching on to the growing social media trends. Eric wants them to know “there’s a service out there that exists that could actually help your business and “up your profits” and that “it’s affordable and you can strategise and be as effective as the biggest brand you can think of”.

His internet-based career path is a far cry from his expected career path in the legal profession. Initially, he wanted to be an attorney. He went to school and studied criminal justice.

“After years of working in the corporate America atmosphere, I found myself arriving at work early, just to sit in the parking lot and dread the next 8-10 hours of my life,” Eric said.

“I was less interested by the day. To add to that, I quickly learned who the real attorney was in the lawyer/assistant team effort. The assistant pushes all the paper, and attorney shows up and pretty much regurgitates all of the information learned by the assistant; they show up when it’s show time. I always knew that I had more to offer, more substance than any corporate America job would ever allow me to put to use.”

Back then, Eric worked as a full-time legal assistant by day and a promoter at night. He and his best friend created a website called “nocturnaljungle.com”. It was a search engine and social community for nightlife. Promoters and club owners in Florida would pay them to promote events and venues on the website.

“The idea was great, it was way ahead of its time,” Eric said. “This was my first attempt at entrepreneurship and using the internet for profit. Social media had recently become the next big thing. By the time we had made somewhat a name for ourselves in the nightlife industry as promoters and the guys with the ‘next big idea’, life began to slowly change for me. My wife, who was my girlfriend at the time, became pregnant with our first child, Eric IV. I decided it was time to make some adjustments to business if I was going to be a good dad and husband.

“Nightlife was fun, we made some money while promoting and running the site, but it was a very fickle industry from a business standpoint. I needed to be doing business in an industry that was more consistently lucrative and conducive to a family-oriented lifestyle. At this point I was sold on the power of the internet and knew that I wanted to continue to utilise it to help others. I just needed to form a business with services that would be worth the cost, and from that thought, BRAND300 was created.”

When nocturnaljungle.com didn’t work out, it was a bittersweet moment for Eric. But had that first business idea not failed, Eric said he probably wouldn’t have been in the mindset to move away from strictly marketing nightlife to rebrand himself “In retrospect I learned that things weren’t falling apart, they were actually falling into place,” he said.

Eric feels that others should consider the growing trends of the digital age when making career decisions.

Based on multiple case studies performed by designrush.com:

• By 2021, mobile e-commerce will account for 54 percent of all online sales.

• Consistent brand presentation across all platforms increases revenue by up to 23 percent.

• Facebook Ad revenue in the US will surpass total print ad spending by 2019.

“Technology is rapidly advancing daily, so much to the point where the learning curve increases every time it actually advances,” he advised. “Someone has to do the work. Who will that be? In The Bahamas, with the cost of living being so high and shortages in job availability, I would strongly suggest to anyone who’s willing to learn the concepts and do the work to consider the growing trends of the digital age, no matter their industry. A lot of the information can be self-taught and because of the way that the digital industry works, there’s lots of room for high return on investment.”

Eric was born in Nassau to parents Eric Gibson Jr and Christine Gibson, and has an older brother, Gantt. Education, he said, was paramount to his parents and he and his twin sister, Rickeria, attended Nassau Christian Academy and then St Augustine’s College. While at SAC, Eric participated heavily in music.

“Being the grandson of the well-known entertainer, King Eric Gibson and having a father who was also heavily influenced by that same person definitely played a major role in me having an ear for music,” he said.

“I found myself playing piano, drums, guitar and even singing in front of the entire student body. A lot of people to this day still don’t know that I can ‘hold a note’. But it was around this same time that I felt a higher calling for my future.”

At 15, he left Nassau for Orlando to complete high school and pursue his passion for the sport of golf.

“School was very tough for me,” Eric admitted. “From junior high school through college, but specifically from 3rd through 8th grade, I was either failing a grade or on probation. Because of my poor academic history, I got so used to hearing negative things about my future: ‘Eric need to try harder; Eric doesn’t apply himself.’ After I left for the US things got better for me academically. From 9th through 12th grade I received nothing below a 3.0. There were still some challenges, but it was the best my grades had ever been. If it weren’t for me making the sacrifice of moving to another country to further my education, I would have never overcome the difficulties I was having academically. 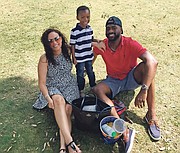 Eric with his wife, Amy, and son, Eric IV.

“I learned how to teach myself things that I had difficulties learning with teachers. I found that I actually learned things differently than others. From then, I knew that whatever I put my mind to, I could achieve it. Even if there was a roadblock, I could still achieve my goals. And that has been my mindset with everything I do. Ultimately, overcoming my academic struggles taught me how to spot the upsides being ‘different’. It did a lot for my self esteem, which gave me a new and rejuvenated look at my future.”

One of his main clients today, Avvy Bahamas, gives him the opportunity to combine his passion for music with his internet savvy, and Eric has no intention of slowing down. He sees a wide open market in The Bahamas to help local businesses more effectively reach their immediate customers and the world. To contact Eric, email: brand3hundred@gmail.com.