DIANE PHILLIPS: Hey you, stupid, switch your phone off 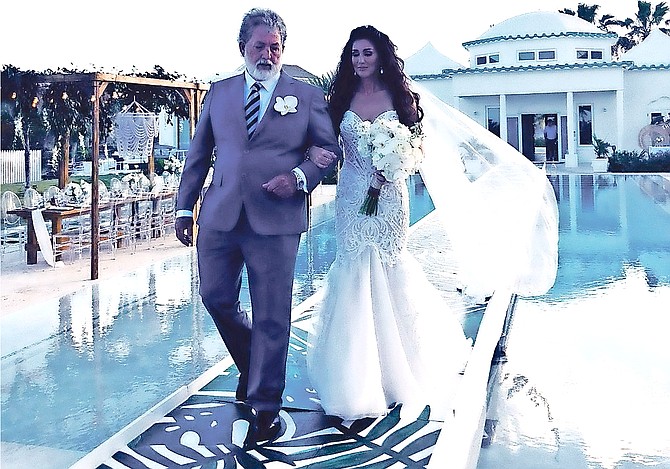 FATHER and bride: The wedding of Diane Phillips' daughter on Saturday.

Our daughter got married last Saturday. It was magical. Friends, family and even those who are reliably brutally honest said it was the most beautiful wedding they had ever been to. And in the middle of it after he had walked her down a 63-foot hand-painted runway over a swimming pool and deposited her in the safekeeping of the pastor and husband-to-be, the bride’s father, my beloved husband, walked to his seat and momentarily stole the show when a jarring noise erupted from his pocket, growing insistently louder and louder. The crowd stared. The ceremony stopped. He rose, fumbled and finally silenced his cell phone that had just gone off.

Even in a movie theatre, the meandering hot dog warns you to silence your phones. At funerals, a human issues the warning. On airplanes, a stern voice instructs you to turn off all electronic gadgets for take-off and if you disobey, the flight attendant stares at you with a look in his eye that says, “Hey, you, stupid. Turn that thing off and let this register: You will be the last person on this plane to get your choice of mini-pretzels or chocolate chip cookies.”

Cell phones – friend or foe? Ally or adversary? Ignoring for a moment their immeasurable salience as sources of data and reverting solely to their initial role as instrument enabling conversation, consider the conditions of their practicality.

Just when we would have plenty of time for a relaxing chat while soaking in a bubble bath, the cell phone is totally impractical. Soapy sudsy bubbles would destroy 1,000 contacts and wipe out our existence in a sinking heartbeat. Cell phones as talking instruments are equally impractical when skiing, kiteboarding or jumping out of a plane and floating through the air and we want to share an adventure by describing the mountains or runs or reefs without fear of actually colliding with one.

But look where we can use them, while driving, when the only distraction they cause could potentially lead to death or dismemberment. A distracted wedding ceremony is one thing. The distraction will be among the memories of the day, paling as time goes by to the look of love between the betrothed. But such is not the case when an accident victim lives the remainder of his or her life without limbs courtesy of a distracted driver talking about Sunday’s football game.

Nevertheless, that is not the point of this writing, but just saying, as they say, the time has come to end all but hands-free cell or smart phone use while operating a vehicle. Road safety week coming up and all, it’s time to acknowledge our addiction to our phones is so strong the only way to cure it is to make it illegal to touch while driving.

How addicted are we? In the UK, the average adult spends the equivalent of one day a week on a smart device or connected to a screen. In the US, the figure is even higher. According to a new study by the market research organisation best known for prying into our TV lives, Nielsen, American adults spend more waking time interacting with media than they do any other activity, some 11 hours reading, watching, listening to, playing games on, researching or other e-action involving media. That includes work time at a computer and leisure time in front of TV. The research may be dated by now since it was published last August and the number of hours could be even higher. Four years ago, the same Nielsen group advised that American adults were spending a little over nine and a half hours staring at screens so the reality is the trend is taking us farther down the path of electronic communication, dependency and addiction.

That may be bad news for how we deal with relationships but it is good news for phone manufacturers and distributors. Last year alone, there were 1.56 billion smart phones sold. (Personally, I am not sure how smart they really are if they couldn’t tell there was a wedding going on and keep it on silent for a few minutes). The value of those one and a half billion units was reportedly $522 billion worldwide. Samsung remains the clear leader with 291.8 million units sold last year though its lead is slipping. Number two was Apple’s iPhone but in recent months, China-based Huawei quietly slid past the iPhone and became the second most popular smart phone in the world. The company whose name many of us would be challenged to pronounce is now the largest manufacturer of all electronics worldwide.

If you doubt we live in a touch screen environment, you grew up in the kind of innocence that over-30 somethings did when fort was something you built in the back yard, not a game series and when play meant an activity that involved other humans. It may be humorous that the bride’s father’s cell phone went off in the middle of the wedding ceremony but there is a sadness about the loss of real play time, the substitution of staring at a screen instead of skipping rocks over a shallow body of water or playing ball until darkness falls and you reluctantly have to go inside. There is pleasure in being able to access all the information you need in a second on Chrome or find the most outrageous way to share a Coke on YouTube, but it is not nearly the reward of climbing a tree with a friend or sitting by the dock and letting your feet dangle barely brushing the water, sharing secrets and dreams. You can’t do that with a phone. Well, maybe you can, but let’s not go there. The world has changed and we have been swept up in the momentum without even thinking about it or putting on the brakes.

A single picture tells the story best. It is a little boy of potty-training age, sitting like daddy on a miniature version of the big white fixture next to him. Just like his daddy, he is reading a magazine but when he swipes his finger across the page, it fails to respond. He looks up and pronounces the print publication broken.

We may never go back to a life without smart devices and touch screens. The magazine may never trump the tablet but one thing’s for sure - at least paper does not interrupt a wedding ceremony.

I wish Bahamians would learn to put the effing cell phone down for at least an hour each day.

.......but it is not nearly the reward of climbing a tree with a friend or sitting by the dock and letting your feet dangle barely brushing the water, sharing secrets and dreams. You can’t do that with a phone.

I really miss those days! We are being consumed by technology and hardly have time for meaningful human interactions nowadays.

Congrats to your daughter on her nuptials!

Diane Phillips ----- your girl got married. If cel phones were a problem for you tell your guests, why are you bothering us with your petty problem. Joe public does not care a rat's carbuncle about your wedding. You get paid by the Tribune ( one assumes -- god knows why) to annunciate on topics of general interest to the Bahamian public, not your own private problem. who are you related to at the Tribune?