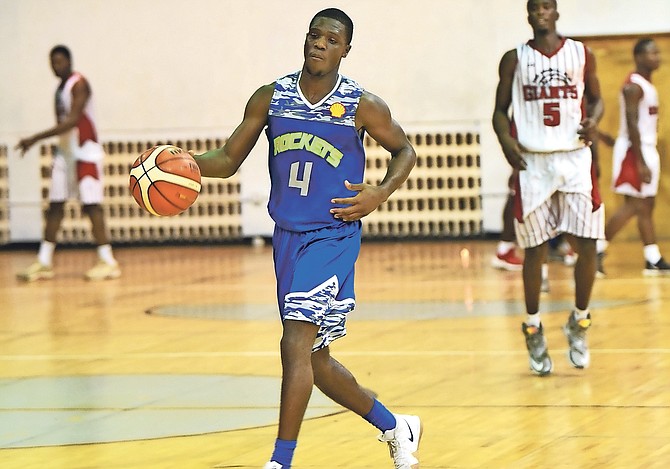 Rockets against the Giants on Wednesday. Photo: Shawn Hanna/Tribune Staff

THE Leno Eagles Nest stunned the Aliv Bucket and the Discount Distributors Rockets knocked off the Leno Regulators as the New Providence Basketball Association continued its first round playoffs at the AF Adderley Gymnasium on Wednesday night.

In the division II opener, the Eagles Nest nipped Aliv 80-78 and in the division one feature contest, the Rockets got by the Regulators 88-68 in the first game of their respective best-of-three series.

Game two in both series will be played on Saturday night.

Donte Deveaux exploded for a game high 24 points with six rebounds to pace Leno to their victory.

Cordero Pinder worked his way inside the paint for a game high 26 points with 13 rebounds to give Discount Distributors the initial lead in their series.

In a losing effort for Leno, Kenneth Pratt was the lone player in double figures as he canned 24 points with 15 rebounds and four steals.

Playoff action continues this weekend. Here’s a look at the games on tap: