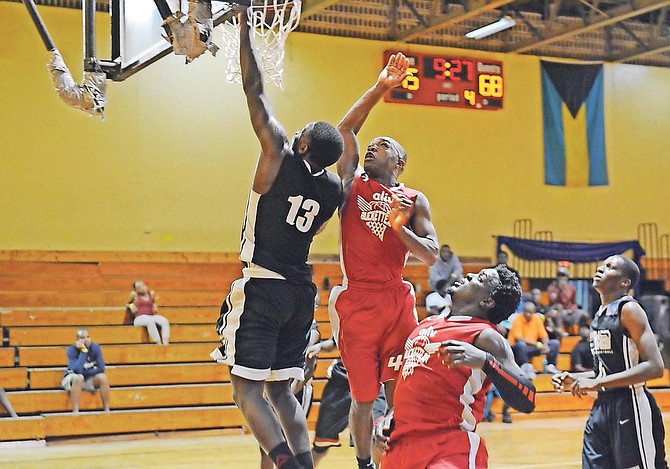 THE New Providence Basketball Association continued its first round best-of-five playoff series with another double header at the AF Adderley Gymnasium over the weekend.

On Saturday night in the division II opener, the Aliv Bucket took care of the Leno Eagles Nest 98-91 and the Leno Regulators got by the Discount Distributors Rockets 100-97. Both series are now tied at 1-1 and will resume with game three on Wednesday night.

On Friday night in the division II opener, the Triple K Stampers knocked off the Sun Oil Rockets 84-77, while the University of the Bahamas Mingoes regrouped for a 105-101 overtime victory to level their division one series with the JD’s Seafood Shockers. Both series are also tied at 1-1 and will play game three tonight, starting at 7:30pm.

Selwyn McKenzie came off the bench with 13 points and four rebounds as did Tomeko Moxey with 18 points and five rebounds.

Tyrone Sands Jr canned three consecutive jumpers to help the University of the Bahamas pull away from a slim 98-97 margin with one minute and 37 seconds into a 105-98 lead with 50 seconds left in the overtime period.

Patrick Brice converted the first of his two free throws with 50 seconds left in regulation to pull JD’s into a tie at 87-87 and eventually force the extra five minutes.

In their comeback win to even the series, Kemsy Sylvester led the attack for the Mingoes with 31 points, 18 rebounds, 10 steals, five assists and two block shots.

For the Shockers, Brice finished with eight points and nine assists, but Lenny Oscar exploded for a game high 33 points with three rebounds.

Shakwon Lewis had 21 points, 10 assists and six rebounds, Bernard Bonaby had 15 points and four rebounds, William Rigby had 11 points and 13 rebounds and Adam Johnson chipped in with nine points and nine rebounds

Johnley Noel led a balanced scoring attack with a game high 23 points, 20 rebounds, to assists and two steals to pace Triple K to their win.

Cameron Chery chipped in with nine points and six rebounds.

8:30pm - University of the Bahamas vs JD’s Seafood Shockers