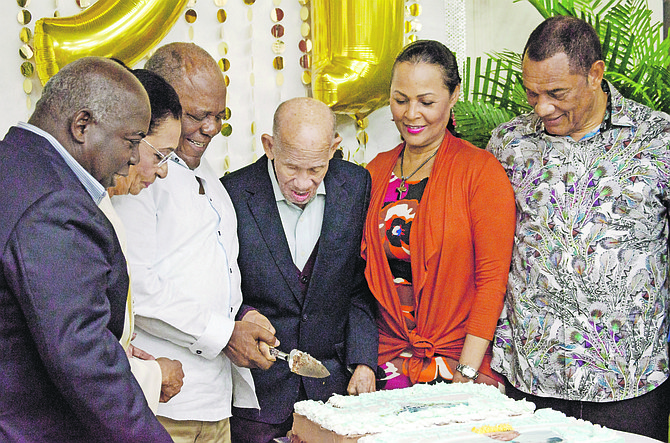 FORMER Governor General Arthur Dion Hanna was lauded as a staunch nationalist and one of the founding fathers of an independent Bahamas at a special dinner to mark his 91st birthday.

He was lauded for his contributions, particularly as the architect of Bahamianisation for which he held strong conviction.

Mr Ingraham said: “I am especially grateful for the support you gave me Hanna. When I was with you, when I was not with you, and to say on this ocassion not only are you a patriot and a nationalist but you are also a founding father of this nation. The first minister of education, part of a majority rule government.”

He continued: “And one of the things not many acknowledge or know but you opened the floodgates for scholarships for students to go to university. In fact, every Bahamian who got accepted to (University of the West Indies), everyone had their fees paid for by the government of the Bahamas, whether they got a scholarship or not.”

During his tribute, Mr Ingraham recounted his earliest political experiences with Mr Hanna - first in 1972 on the campaign trail in Abaco, and again in 1977.

He noted Mr Hanna always treated him fairly regardless of his political moves, but stressed he left an immeasurable impact on his political career due to his mentorship.

Mr Ingraham continued: “He was extremely fair to me and my constituency, in fact he did for me something that endured to my benefit throughout my public life. He decided that he would take me as a part of his delegation to every meeting of the IMF and world bank in Washington, Toronto, South America. For seven consecutive years I attended all those meetings, sat with him. He ensured that I had the opportunity to participate and he did his utmost to ensure he drilled into my head the ethics of government and whats good, fair and what is honest.”

Both men were close with Mr Hanna, and recalled eating lunch together on Cabinet days.

For his part, Mr Christie also paid tribute to Mr Hanna’s late wife Beryl Hanna, whom he described as integral to the political movement of the country, and the “wind beneath his wings”.

Mr Christie said: “He was the prime mover of (Bahamianisation) and as a minister he vigorously implemented, even to a point where others would be concerned of how forceful he was in putting Bahamians first, in as many circumstances as he could.

Mr Christie added: “He was one of those men in public life who took principle conduct to the point where he was even prepared to pay the price that goes along with that. Hubert and I are here today because we share something every enriching in common with A D Hanna because however we want to view history, he stood with us. “

Does this have anything to do with Crown land?

I want to say Mr. A D Hanna is a great person who has made good history in The Bahamas and also the father of Mrs Glenys Hanna Martin,another well-known person in this Land of so many Churches. Now let's look to the majority of people honoring him,they are not necessarily in the right side of history pertaining to The Bahamaland. These are people who disrespected,repeatedly during their tenures,not only the dignity of all the people living in this Land but also neglected so many good principles regarding managing "The Public Pulse" where still many people asking : Where the VAT - Money went ? Then the other one spent few weeks on national television,during campaign time,saying "The Road Project is on time,it is on budget and it is on schedule" ( on time & on schedule is the same thing),so out of the blue without any warning,under impunity as the first one,this person doubled the value of the project because he smelled that was going to loose the election and almost immediately retired himself from politic. A difference of more than $ 90.00 Millions!!! ,and he didn't win the lottery. Cooper's Town should be a metropolis now. What a bad legacy for the future generations. So many people got away with wrong doing while others tear down "The National Pledge to the nation and created their own pledge to satisfy their own gain or political game. Now,that bad legacy is still running today. I want to challenge Anyone to do the math and find out how much money this newly elected officials collect everyday from VAT ? Because I spent about $8.00 BSD only for VAT, today. And mostly I spend ,for VAT,more than $ 3.00 dollars everyday. I think they collect nearing $3.00 Millions EVRYDAY. Where is the VAT-money going still now? Pls somebody do the math.

This was a gathering of the biggest crew of pirates in the Bahamas!

May they take their ill-gotten booty to the grave with all haste and enjoy the rewards of Satan, their GOD.

I like AD, particularly when he showed great integrity by resigning from his well paid appointment in the Pindling administration because of the corruption he perceived. A good man aalthough his Bahamianisation policy totally gutted the Ministry of Education and directly led to our D- average presently being suffered.