Face To Face: In Honour Of Women Who All Made Their Mark 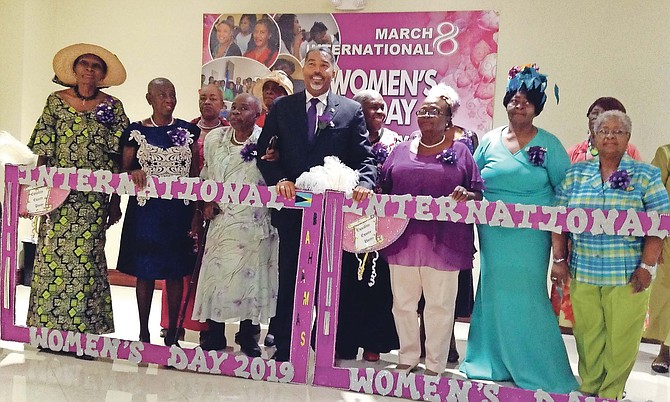 Women all around the world celebrated International Women’s Day (IWD) last Friday, a global occasion recognising the social, economic, cultural and political achievements of women. According to IWD’s website, it has occurred for well over a century, with the first IWD gathering in 1911 supported by over a million people in Austria, Denmark, Germany and Switzerland. Prior to this, the Socialist Party of America, United Kingdom's Suffragists and Suffragettes, and many other groups around the world campaigned for women's equality. This year’s theme “Balance for Better” focused on “forging a more gender-balanced world, celebrating women’s achievements, raising awareness against bias, and taking action for equality."

In The Bahamas the Ministry of Social Services and Urban Development’s Department of Gender and Family Affairs along with its Urban Renewal Commission teamed up to present International Women’s Day Awards Ceremony and Luncheon at the National Training Agency on Gladstone Road. There, nearly 30 women, specifically from the inner city areas, were honoured for long years of commitment to community development.

Minister Frankie Campbell said the women who were chosen to be honoured were those who “selflessly give, even from their own purses to feed children; whose personal sacrifices and mentorship, touching and moulding the lives of so many, deserve to be honoured”.

Vernice Paul was born on Old Bight, Cat Island. She was married to Alfred J. Paul for more than 50 years and is the mother of nine children. She was employed at the Ministry of Foreign Affairs for more than 15 years. At the age of 60, she decided to take an early retirement in order to fulfil her dreams of travelling the world. She has visited the continents of Africa, Europe and North America and she has also travelled extensively throughout the Caribbean. She served as president of the Urban Renewal Centre in her area for six years, and recalls many “rich memories including bus rides, lunch dates, beach days and church visits” with the kids.

Muriel Johnson-Thomson learned her trade as a straw vendor at the tender age of eight and today, she is a master straw craft artist. Her artistry has been seen all over the world. She is very proud of her work and makes sure that nothing is out of tack. Her infectious personality of humility and kindness follows her in every area of her life. She is also a great baker known for her pound cakes, raisin cakes and fruit cakes. She is the wife of the late William Onarld Thompson and is known as a devoted mother, grandmother, great grandmother and great great grandmother.

From the Pinewood community, Reverend Shirley Mae Evans, Beryl Elliott and Mizpah Amrbrister were honored. Shirley Mae Evans was the first woman to be ordained as Minister of the Gospel for the Metropolitan Baptist Church. She was ordained on August 15, 2006 by the church’s Senior Pastor George Kelly along with Dr. William Thompson. She is a peace ambassador for Urban Renewal and is the newly elected president of Pinewood Urban Renewal 2.0 senior’s club.

Beryl Elliott is the immediate past president of the Pinewood Urban Renewal Seniors Club. She has worked in the tourism industry for more than 40 years and is now “retired and loving life”. She is known for exemplifying strong leadership skills and for serving the Pinewood community with dedication and commitment from 2002 to the present. She is an active member of New Destiny Baptist Cathedral where she serves as Light Leader, Usher Board member and Yellow Team member.

In Nassau Village, Wendy Patricia Morley, Catherine McKenzie and Jennifer Rolle were selected as honorees. Catherine Clarke McKenzie is the eldest of 16 children. Her hobbies are cooking, farming and sewing. She is especially proud that, from her own garden, she has produced much produce such as corn, cassava, okra, yam, bananas and peas. She worked at the casino on Paradise Island for many years. In the 1960s, she says that all the artwork on the Androsia prints were done by her.

Jennifer Rolle, 64, is the mother of seven children and is of the Seventh Day Adventist Faith. She has been serving at Hill View SDA church for almost her entire life. She is active in Sabbath School and the children’s choir. She was named Mother of the Year for Nassau Village.

Wendy Patricia Morley is a former broadcaster, life underwriter, and activist. She is a recipient of the World Peacekeeper International Award from Dallas University in Texas, 1988. Morley’s work included participation in some form of action to enact social and political change for national and international concerns for women and girls. She is known for her work in advocacy for foster homes, Alzheimers patients, those battling cancer and AIDS, troubled youth, and trafficking in persons.

Free Town honourees included Philippa Taylor, Pastor Irene Russell and Paulamae Miller. Pastor Russell, an Eleuthera native, started her ministry in the church in the late 1940s under Reverends Earl Weech and Earl Pritchard, holding revival meetings in Eleuthera. Upon her arrival to New Providence, she began attending Evangelistic Temple on Kemp Road. She preached her first message at the age of 12 and since then, her ministry has consisted of preaching, teaching and playing the piano. In 2017, she was elected coordinator of radio and television for the Bahamas Christian Council.

Philippa Taylor is known as an author her her historical publication: “A Walk Through Kemp Road”. She served as secretary of the Kemp Road Community Development Association for many years and played an integral role in the establishment of Kemp Road Week.

Fox Hillians are proud to hail their IWD 2019 honourees: Sheila Knowles, Miriam Roker and Rev Julia Bain. Knowles is president of the Fox Hill Senior’s Association. She is known as a “kind and giving person, whose spirit of excellence propels her” as she continues to accomplish new goals even in her senior years.

Miriam Roker was born in Fox Hill. She has served in various capacities in the church for five decades. She is considered a “modern day Dorcas” whose culinary skills and ability to greet anyone into her home graciously are known even internationally. She was once honoured by the Mother’s Club as “Most Unselfish Mother”.

But our religious freak run national won`t hear of it.