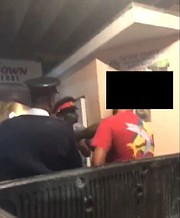 VIDEO footage has captured the moment a police officer slapped a man in a club downtown –– but according to the club’s supervisor, the clip tells only a small part of the story.

The 14 second clip, recorded at Tropicana over the weekend, shows police officers conversing with several men in a densely packed room.

The officer is then restrained by his fellow officers.

“Muddoes (sic),” says a man near the camera.

The clip spread across social media yesterday. It comes several months after another video went viral showing an officer slapping a man near Prince George Wharf, prompting outrage. Police have yet to disclose the results of their investigation into that incident.

As for the recent incident, a supervisor at Tropicana bar told The Tribune yesterday the officer’s slap was justified in her view. She said police had been called to the bar about an alleged assault. When they arrived, she said, the man in the video and his friends got heated with police. She claimed the officer slapped the man after he had been pushed.

“It was a forceful push,” the supervisor, who asked not to be named, said. “The slap was justified because it was three of them against that one officer and the officer was small compared to the three men. The (other officers) were standing off.”

The men, Bahamians who often frequent the bar, were arrested, according to the supervisor. “I was satisfied by how the incident was addressed,” she said. “I would’ve liked for the person who did the recording to get the full scoop of what happened instead of just posting the part where the officer hit the gentlemen.”

She said: “We have a public charge to get into the club starting at 9pm. I told the men it was a charge, $20 for locals. They started to argue and said they’re not paying to go upstairs so that’s what started the altercation.”

Someone needs to slap some sense into these morons

The police force has been an out of control group of thugs for decades! Brutality, torture, and mental/physical abuse are the order of the day with the Bahamian constabulary.

Animals policing animals can only result in corruption!!

The police have a legal right to slap the happy hell outta any er we who attack him/her to subdue us. . .DAS THE NAME OF THE GAME. . .YA DON'T WANT THE POLICE TO SLAP THE PISS OUTTA YOU. . .KEEP YA HANDS OFF THEM!!

well said licks, these dummies did not want to pay the cover and forced their way into the club, police were called and an idiot pushed a police officer and got the piss slapped out of him and was arrested. Got what he deserved.LMAO

I'm not aware of any rule, regulation, or law, that allows a police officer to slap a prospect. If the prospect pushed the police officer then of course further charges may accrue against him/her. We are headed down a dangerous path when we begin to justify police officers becoming also judge, jury and executioners.

The Penal Code allows for them to kill you if you go at them with something that can do them serious harm!! That officer went easy with that bully. . .in fact any citizen can slap the happy hell outta any person who attack them. . .the greater the threat. . .the more severe can be the response!

What Penal Code are you referencing?

Thank God they are slapping. If we push this to the extreme then officers will also go to the extreme to protect themselves. The officers could shoot people instead. Claiming they were assaulted and feared for their lives; happens in other countries. Granted some officers are arrogant and corrupt but some are just trying to achieve law and order for our safety. They are just like us trying to do a job to pay their bills and get home safe. Slapping is a relatively benign act to punish someone who thinks it's acceptable to physically contact an officer.

Everyone has all these comments about police slapping people but no one wants to comment that the Fluckin Tropicana is nothing but a whore house?
So people are upset that the cops slapped someone when the cop should have arrested him... and everyone thinks these guys are stand up honest fellows that were just by trying to bully their way into a whore house, this happens all the time in all of our Bahamian whore houses right? How is the whore house supposed to stay in business?

I think everyone in this story should have had the schit slapped out of them for being near that hell hole....