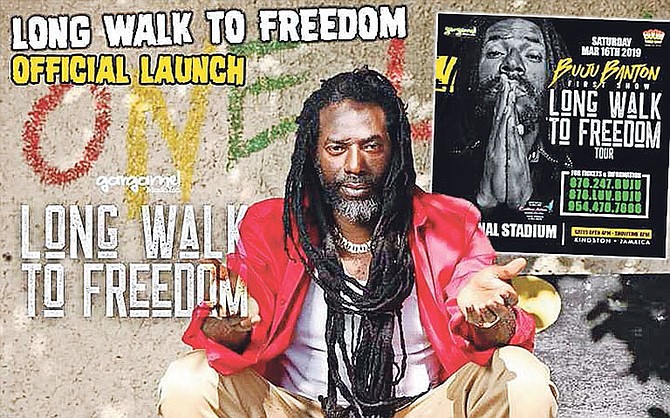 PARADISE Productions officials said yesterday other artists who have not yet been announced will be added to the Buju Banton Long Walk to Freedom Tour.

Officials said promoters are in talks with “surprise guest artists” who may appeal to an older demographic.

Some fans of Buju Banton have complained on social media about the line-up - which includes international acts such as Kodak Black and Lil Duval - expressing disappointment that other classic reggae performers were not selected.

At a press conference at Breezes resort, Perez Rolle, a Paradise Productions executive, said the intention behind the selection of artists from different genres was to mimic a music festival.

He said: “We would select a particular artist from a genre that we think would appeal to the masses more and so reasoning behind selecting the artist we did chose was to reach a wider demographic. I know Buju himself appeals to the older demographic so, for example, Kodak Black will appeal to the younger demographic. the 16 to 24 age bracket and we want this event to be all-encompassing.

“We don’t want to exclude any age bracket, any group. We want there to an environment where people can come and have different experiences at one venue so that was the intention behind it.”

He added: “There are other few artists who we are presently in conversations with and other surprise guest artists who we have yet (to announce) who we think people will be more excited to see who those persons are, especially the older demographic. They’ll be excited once we release that this coming week.”

When asked about negative feedback regarding the concert’s line up, Mr Rolle said he doesn’t think different artist of different genres detracts from the experience at all.

“For every negative response, we’ve gotten an equally positive response to match that so again the interest is overwhelming. We have a lot of local artists on the ticket, so we have Willis and the Illest, Jah Hem, and some local rappers. We have definitely considered and incorporated our local Bahamian artist.”

Mr Rolle also said ticket sales so far for the March 30 concert have been overwhelming, with some fans planning to travel from Asia to attend.

Mr Rolle said: “Presently we are continuing to run the early bird special just because we want to get that wider demographic and audience. We don’t want the price point to get too (high) for the younger demographic because we know that can be an issue. As far as numbers, tickets are selling pretty well for the most part, we have gotten overwhelming ticket purchases from the US.

“We have persons coming from as far as China and Japan. The international crowd is definitely into it, they have definitely bought into the idea. The local crowd is picking up and progressing very well.”

Security will be provided by the Falcon Security/Damas Group in conjunction with the police, with the promoter promising safety and quality production will be a “priority”.

Super Club Breezes and Western Air are providing special rates for the concert.

Tickets and further information can be found at www.paradiseproductionsinc.com.

Fire this fool that did this. it is not a festival its one night only, I will not stand up all night waiting on buju bored out of my mind because I don't know what the hell is going on, on stage. So i guess I will have to wait for some promoter who knows what they are doing to go and sing boom bye bye.

The only person may can save this is Beenie Man

Beenie Man AND Buju??? That would be something. I'm off FB I didn't even know this was a thing, I just asked a friend who is Kodak Brown and Lil David and I wasnt even trying to be funny with the names, wasn't till I heard the ad a second time that I recognized the mistake

From he said appeal to 16-24yr olds he lost a good much of the over 30 crowd. What over 30yr old wants to be partying at a concert with 16yr olds.

They should have done a line up like Jamaica has and cater to the 30+ adult crowd- which is who can afford VIP and platinum tickets.

Yes, yes and yes, one media source has been out deep fishing for gossip among those who will be at the 18 to 30 year old 'political career veto age' comes the 2022 general election, and accordingly discovered that if the same comrade 35 red shirts re-contested be House MP's - potentially defeat awaits 25 on track to take a 'long walk tour' away from their experiencing second term sitting on House's governing benches on PublicPurses's MP's, cabinet ministers parliamentary secretaries and government boards chairman's and chairwoman's paychecks, yes no - no invitee back to Peoples Honourable House 25 red shirts ?

Isn't it counterintuitive to release the name of the main draw then keep the names of the sub-acts as a surprise? I could see if this was a "kodak black" concert and the surprise was buju...but you already release the highlight...I'm assuming no one could top buju.I could be wrong maybe they have Bey since it coachella-like.....maybe bob Marley(i know), but that's about it.

Anyway i wish buju a sold out stadium

Yes, yes and yes - so much the inspirational cultural exchange spirit promised under CARICOM..... whilst we get embrace Trini and Jamaican performers - no juicy paycheque invites we own comrade natives fly off entertain the Trini's and Jamaicans...... very bad - yes, yes?