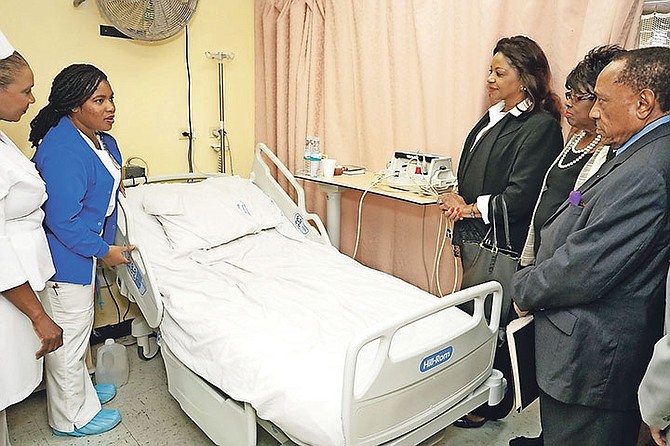 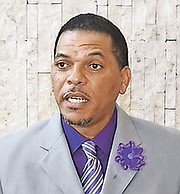 A BED donation presentation was held yesterday at Princess Margaret Hospital to celebrate the PMH Foundation donating 25 new hospital beds to the hospital – a gift worth more than $90,000.

Public Hospitals Authority deputy managing director Lyrone Burrows said this donation was a response to an “ongoing appeal to replace old patient beds” at the hospital.

Mr Burrows also reiterated PMH faces a bed shortage, telling reporters this will be remediated by the recommissioning of wards that were damaged by hurricanes. Mr Burrows added there is a “long-term plan” for PMH expansion, at a cost of $200m.

Twenty-three of the new beds were placed in female medical ward 1, one in the gynae ward and one in the maternity ward (staff suite).

Mr Burrows was also asked to address the fact that replacing old beds does not mitigate the hospital’s bed shortage.

“We are moving forward in terms of recommissioning and bringing those wards back into play. We’re now working on the old ICU, old operating theatre, recovery room, as well as the old male surgical (ward).

“So those are now in play and we anticipate within the next 12 weeks that we are in position to have those available for additional beds, somewhere between about 25-30 additional beds coming on stream as a result of that, which will help us significantly as we move into the expansion renovation of the Accident & Emergency area.

“The current space will be in a state of renovations and A&E will be shifted to another location that’s a little bit smaller. As part of that we want to be able to ensure that we have additional spaces to be able to move persons that currently have had to be placed on trolleys in the waiting areas as opposed to finding alternative space.”

Mr Burrows clarified that these new wards may not “eliminate” the bed shortage but will “reduce significantly the impact of it”.

“We obviously have a long-term plan in terms of the expansion of the (PMH), which obviously requires significant amount of capital. We’re looking to benefactors such as the PMH Foundation but as well as the Bahamian public at large as well as international donors.Through our efforts we’re talking about in the first phase somewhere in the region of about $200m that need to be funded to be able to provide us with the necessary expansion that we’re looking for.”

Mr Burrows was unable to provide specifics on a time frame for expansion but reiterated the necessity of “capital funding”.

Mr Burrows was also asked which specific wards are still out of commission following the damage wrought by Hurricane Matthew in 2016.

Noting he did not have specifics, he added “we’re probably somewhere in the region of about 200 beds short in terms of capacity and we’re working towards, one by one, bringing those back into play.”

Regarding a contingency plan in the meantime, Mr Burrows said: “We’re working to ensure we do not have patients in for any longer than is needed, that the process of assessing needs, triaging, identifying who should be in hospital and who should not, looking at utilising some of our externalities, working in partnership with the Department of Public Health.”

A full scale investigation of the PMH Foundation chaired by Richard Demeritte should be done.

Isn't him the former Chairman of the Bank of the Bahamas....????.....and group of delinquent mortgage customers accounts went into the former Chairman former Banking GovernorMr. James Smith of Resolve vehicle funded some $100 million taxpayers money to hold those loans..??? Or likely seems a Medical Doctor..successfully getting donors for separate Foundation for donations to PMH...seems very successful.....

We are proud VAT paying beggars.