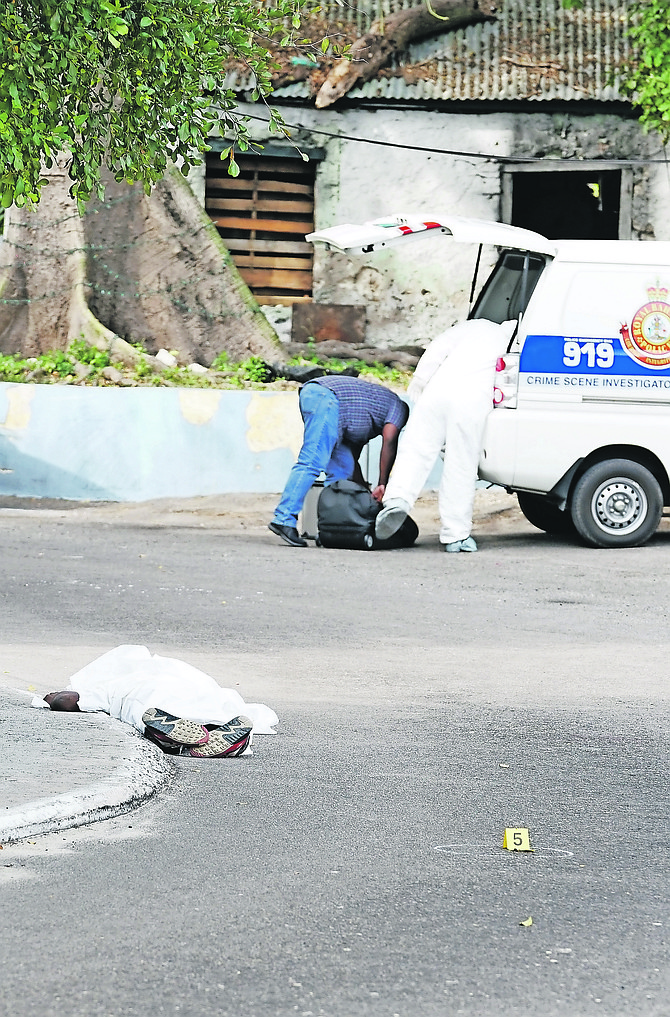 The scene of the double shooting in Fox Hill. Photo: Shawn Hanna/Tribune staff

TWO men were shot, and one killed, yesterday afternoon during a brazen drive-by shooting at the Fox Hill roundabout. The second victim was shot in the leg and taken to the Princess Margaret Hospital.

According to Chief Superintendent Solomon Cash, the two perpetrators were riding a moped when one shot the victims. CSP Cash added that officers from the Mobile Unit were patrolling the area when the incident occurred and actually witnessed the shooting.

Officers pursued the moped through Fox Hill to the Blueberry Hill area. There the suspects escaped into bushes opposite Bahamas Harvest Church. 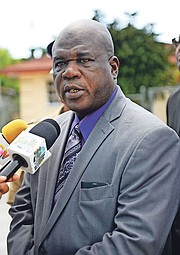 CSP Cash said police are working with some “significant leads” on the matter, adding officers are “very confident” that they will find the perpetrators.

Distraught relatives and members of the community flooded the scene surrounding the roundabout and park, which is a popular area frequented by area children and older residents.

A father of two toddlers, Ms McKenzie and other relatives described Thompson as a “loving person” and a “friend to all,” adding he was a jokester who was “always clowning.”

They said he used to work in construction with his father.

At the scene, CSP Cash said: “Shortly after 3.30 this afternoon, police were alerted to a shooting incident that occurred here at the park in Fox Hill. The officers, once on the scene, saw the lifeless body of a man lying in the street. Additionally, there (was) a second victim, who was shot in his leg and he was transported to the Accident and Emergency section of Princess Margaret Hospital, where he is undergoing medical attention.

“But what I would want to say to you is that during this event, a Mobile Unit from this division was on the alert and patrolling the area at this time and actually witnessed the account happening right before their eyes.

“So what they did, they pursued the moped, which (was) leaving the scene at the time, they pursued that moped through several corners here in the Fox Hill district. Those persons were able to elude the officers in the Blueberry Hill area near a church.

“Both suspects, they ran from the officers into the bushy areas, one dropping an instrument on the scene which was retrieved by the police. Again now, this investigation is early and we don’t know the exact motive behind this latest homicide.

The scene of the double shooting on Sunday.

“But as we unravel what happened here, we’ll be in a better position to update the media as to exactly why this happened. But we are also appealing to members of the public who live in this area or actually may have been tending or visiting one of the businesses at this location, or the park as a matter of fact.

“But if they have any information to feel free to call the police and give us that information.”

CSP Cash could not say whether the suspects or victims are known to police at this time.

He added police suspect the perpetrators “targeted” the two victims. He then took members of the press to the area where the perpetrators fled. They abandoned the moped in the bushes, which police retrieved.

CSP Cash was also asked to address public concern that such a bold shooting occurred while officers were on patrol.

“I will agree with that totally, but what I want to say is: our officers are committed to securing the citizens of the Bahamas. And you find that from time to time you might have isolated incidents.

“But what I want the members of the public to understand is that some perpetrators or suspects are relentless in carrying out acts of criminality. And it’s difficult when their minds are made up to carry (out) these acts to prevent them. But we will remain focused with our strategies to remain in these communities. In essence where we would want to prevent or minimise these types of incidents from happening.”

However, he also encouraged the public to assist in the matter.

CSP Cash also dispelled concern that the perpetrators could be hiding in the church, saying they used the area as a means to escape.

Another young man's life extinguished and for what ???

Everyone was hoping March would be a murder free month.

Police in cars couldn't catch two dudes on a moped? Jesus help us.

Motor bikes are the preferred method of street assignations the world over. . .they are almost impossible to catch in a car. . .in fact I have never heard of any person getting catch when they use that method!! That method was perfected by the Colombians under Carlos Escobar. . .

No such person as Carlos Escobar ever existed. Check your facts

Reports of another murder in Nassau Village today