‘Gbpc Refusing To Sit Down And Talk To Us’ 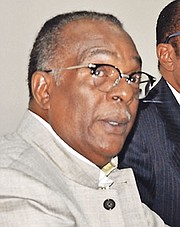 A LAWYER representing Grand Bahama business owners has claimed that a Grand Bahama Power Company executive refuses to sit down with them to find an “amicable” resolution regarding disconnection of power supply at seven fast food restaurants which are the subject of a police investigation into alleged electricity theft.

Carlson Shurland, of Shurland and Co, said that he made contact with Tony Lopez, chief financial officer at GBPC, by email who allegedly responded to his request by sending him a middle finger emoji.

Mr Shurland was retained by the Cooper family on Friday when GBPC filed a complaint with police after it had allegedly uncovered a series of suspected electricity diversions at several businesses in Freeport during a recent metre audit.

This led to the subsequent arrest of businessmen Paxton Cooper, Elvis Burrows, and Kenneth Symonette, who have all denied any wrongdoing, saying the controversy is due to widely-used energy saving devices installed at their businesses. They have since been released from custody pending the outcome of the police investigation.

The businesses affected include three Burger Kings, three KFCs and one Pollo Tropical, which have been without power since last Wednesday, and are operating on limited power from emergency generators.

On Sunday, the family warned that they might have to shut down the businesses which could result in the unemployment of almost 500 Bahamians if power is not restored.

When asked if he intends to take legal action on behalf of his clients in the matter, Mr Shurland said that it depends on what the power company decides to do.

He said: “I told Mr Lopez to restore the power and asked him if he would like to sit down and discuss amicably a resolution. What I got from him was an emoji of ‘the finger’. And if that is the attitude he has, then once my clients give me instructions, well, like my grandmother used to say, ‘if you can’t hear me, you will feel.’”

Mr Burrows indicated that the cost of power is high and is becoming a bit “prohibitive” for business people in Grand Bahama.

“Those who do not run a business may not be fully cognisant of what we go through,” he said on Sunday. “The energy cost is one of the highest cost on the books, and so we as well as other businesses too were using the same energy conservation device to realise some of the same savings we’re trying to realise.

“We weren’t trying to do anything else than to affect some energy savings, which from a business standpoint... you looking at the bottom line; you looking at line items on your income statement to see how you can affect and manage those costs,” Mr Burrows said.

Meanwhile, Mr Shurland said that many other businesses and residents are using the same device, which is being installed by a licensed businessman in Freeport.

“The person who is installing the device is not stealth; they are driving around with a big logo on his truck. It is a well-known business entity in Freeport,” he said.

Kenneth Symonette, the operator KFC on the East Mall and Pioneer’s Way, said that before they purchased the system it had existed for years.

“The gentleman approached us. We were having problems with high power bills and complications with too many power surges and losing a lot of equipment,” he claimed.

“We were buying cash registers and when I had placed orders for power packs, (the power pack provider) said to me no one buys this amount of power packs in our system in the whole world, what are you doing in Freeport?”

“We went through 20 power packs in one month because they were melting on the wall because of the power surges. And here comes someone who says, ‘my system can clean up your power’ and we say tell us what else it can do, and he said, ‘it will save you energy; you only pay what you use.’”

Mr Shurland believes that the power company cannot prove that his clients stole or obstructed anything.

“They are speculating. That is why I say it is fake news because it was negligent investigation, it was too premature,” he said.

Yes, yes and yes if holds true, then any executive comrade for any doing business company by responsive extending they "FU" finger to a lawyers representation letter on behalf of their mutual clients "Free porter's" - that executive's position needs be on spot vacated, yes, no? So nasty finger remember not shake they hand anymore?

Our power surged quite a bit before the new power plant was built, but since then it's been pretty much zero surge.....

If what Shurland says is true, sue them for defamation and move on!

Shurland has done his clients (and the entire legal profession) a great disservice by being so patently untruthful in public. GBPC has the devices and presumably will have little difficulty proving their illegal nature. The owners of the businesses concerned presumably will also have to explain how they could possibly have believed that any legitimate device would result in energy cost savings of 50% or more. The before and after billing periods for many of these businesses are no doubt going to be very telling. And no matter how many jobs may be at stake, Papa Doc Minnis had best ensure that there's no political meddling in this matter. He needs to keep in mind that many businesses in Grand Bahama have had to lay off their employees and close their doors because of high electricity rates caused by freeloaders using devices they know or ought to know are illegal just by the absurd amount of the cost savings.

This is a dumb and prejudiced post. Those devices were widely marketed and for one who is not tech savvy one can believe the marketing claims that they can reduce power consumption ‘by up to 50 percent ‘. And considering the cost of the device one will have no reason to believe they were not legal. Based on the principle of a step up transformer that’s boosts up the electricity coming into the building.

Complete and utter BS. People who own multimillion-dollar fast-food franchises tend to be pretty savvy or they wouldn’t be successful businessmen to begin with. You assume something’s legal because of its cost? Uh ... machine guns are expensive, too — that doesn’t make them legal.

Sorry to hear John that you're as criminally bent as they come. But then again we always new that by your great fondness for the numbers bosses. Be careful though; you never want to cross the line and find you have to serve some time.

The power co screwed up by arresting individuals, when it was limited liability companies found with suspicious equipment and or wiring diverting power.(per GBPC) Interesting. Second, it may well be that the "installer" did the bypass without the Business operator/owners knowledge or consent. That would have to be proven for criminal charges against them. The installer is at the center of all of this. But again, to prove it was he..... Or is GBPC now Judge, Jury and executioner?

Also wondering why the Installer/salesman has not been picked up and questioned yet, While there are more than one i'm sure that has been doing this device installation, seems to be one in particular who's name keeps getting called. Again, the device is a ruse, a distraction, and could never save the % of a power bill promised. Bypassing a meter makes you a thief, same as receiving stolen goods. You didn't tief it, but you enjoyin it.

The Tribune has failed us as usual. The moment this story broke an investigative reporter should have been assigned to get as much information as possible about the installer/salesman before the police arrest him.

And once taken into custody, it will be in the installer/saleman's interest to tell all he knows about the devices he installed for the Cooper's family businesses as well as all other similar device installations that he had any involvement with. Any failure on his part to cooperate, could result in some serious prison time if he's found guilty of installing illegal devices that allow the theft of electricity.

Well said. Investigative reporter? Uh ... I don’t think so. The Tribune specializes in reprinting, verbatim, press releases from the powers that be, and copying stuff they find on social media with their iPhones. I can’t remember the last time one of their reporters asked a difficult question of anybody in a position of power. #Lackeys

Our power bills are high because of people stealing power! Let the chips fall where they fall. He was spotted in Fort Lauderdale with four suitcases, maybe going on a long vacation.

You can do what you deem necessary to save power after the meter (power company property) but if you touch that meter or can you are tampering with the power supply.

We have all of this free solar energy turning us Black even (and beautiful) And only now have we started to harness it and use it to bring our power bills and cost of living down. The more alternatives to energy makes the manipulators And controllers of it less effective.

Regardless of the situation there is no way in hell that this educated, successful business men could actually believe that some sort of "Energy Savings Device" could save them 50% of there total energy consumption. Seems like they are now trying to use the provider of this equipment as the scapegoat. These men need to be cutoff permanently from the grid and be either heavily fined or put in prison. I do recall when Wrinkle was put in jail over connecting a simple workaround because BEC wouldn't make it out to site. These guys were blatantly diverting from their meter. For such educated men they sure seem to act like they know nothing as soon as they got caught......

This will be an interesting test of the independence that should now exist between the Director of Prosecutions and the AG. I wouldn't put it past Minnis and Turnquest to wrongfully press Carl Bethel to lean on the Director of Prosecutions to cut the alleged culprits plenty of slack. The "back scratching" has undoubtedly already begun even though our country is in desperate need for the blindfold to be placed back on Lady Justice. We live in a truly sad time when most Bahamians believe the adherence to the rule of law and order in the proper discharge of justice is a thing of the distant past.