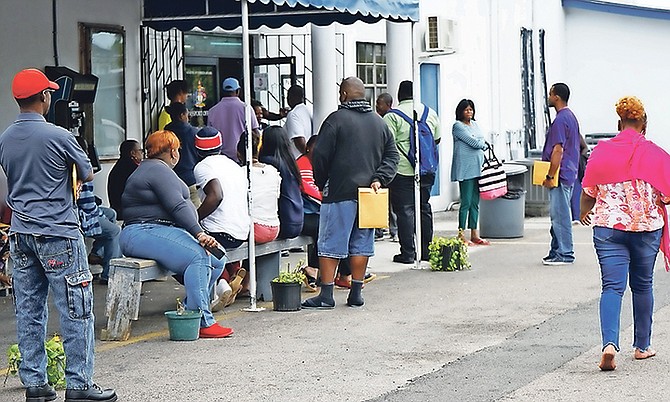 The current administration has not been popular - and that may be an understatement. Many Bahamians are unimpressed or even frustrated with it because of its failure to address major issues, refusal to engage the public, reluctance to respond to questions from the media and lack of clarity about exactly what is planned and what is taking place in. Not only are we not being given opportunities to participate in decision-making, but it does not seem as though the Bahamian people are being considered by the administration. Ministers boldly tell us everything is fine when we can see through cracks, whatever we ask for is ‘coming soon’ and they can do whatever they like doing because they have a title. This is clear in three recent examples.

In recent years, we have been paying more attention to public disclosure. According to the Public Disclosure Act, all senators and Members of Parliament are required to declare assets, income and liabilities of their own as well as spouses and children in the household for the previous calendar year before March 1. Declarations are to be examined by the Public Disclosure Commission and published in the Gazette. The Commission reports issues with declarations, including failure to submit, to the Prime Minister and the Leader of the Opposition who may then initiate action in response. Failure to disclose is an offence punishable by a fine of up to $10,000 or up to two years of imprisonment. This depends completely on the Prime Minister and Leader of the Opposition and those in these positions have never taken them seriously.

It has been reported that three Members of Parliament — Pakesia Parker-Edgecombe, Frankie Campbell (Minister of Social Services and Urban Development), and Dionisio D’Aguilar (Minister of Tourism and Aviation) — failed to disclose by the deadline and were given until March 15 (which Parker-Edgecome missed). Minnis insists they are in compliance. There always seem to be allowances for people who miss the deadline to disclose, though everyone knows the deadline remains the same every year. The same lenience and understanding is not given to Members of Parliament who think critically, dare to make their thoughts and opinions public, or challenge the positions of this administration. It is clear to see the difference in rules for those who stay in line.

Prime Ministers and Leaders of the Opposition cannot be trusted to do what the law prescribes when their own are in contravention. There is a need for an independent body or individual to be responsible for bringing charges. Public disclosure needs to be taken seriously, but even the party that ran on the rhetoric of anti-corruption and transparency is not prepared to do it.

The Ministry of Education has been in the news several times in connection with health issues in our schools. Department of Environmental Health Public Analyst Anthony Ryan said there is are housekeeping issues within government schools which give rise to health issues. He made mention of rodent droppings and dust mites which could trigger allergies and pointed to the poor maintenance of facilities. Minister of Education Jeffrey Lloyd said the summer period is not long enough to take care of maintenance issues and suggested there is not enough money for proper cleaning.

This is outrageous. Can we be concerned about the abduction of children, unsatisfactory examination results and potential measles outbreaks while unconcerned about the health risk within the schools where they spend six hours every weekday? In his comment, Lloyd mentioned the need to create “a culture of ongoing maintenance,” training, and greater responsibility to officials within school districts as if there is time for a long-erm system overhaul. The schools need to be properly cleaned and inspected before teachers, staff and students are expected to be there. It is inexplicable there is no existing culture of cleanliness and health and safety protocols led by the Ministry and carried out in all schools.

The application and renewal process for passports is a disaster and an embarrassment. Numerous people have shared their experiences in letters to the editor and social media posts. The issues with the process are clear to see and the solutions easy to develop. In fact, Pamela Burnside, after her experience which was a two-day fiasco, shared recommendations that are easy to implement.

The current situation is that people go to the Passport Office at 5am in an attempt to ensure they are among the first to arrive and will not be turned away by staff. Some are turned away because they do not have the electronic version of a birth certificate or marriage certificate, or because another document is missing. If only the website were up to date, the phones answered and signs outside the building so that people could easily find out exactly what is needed to make the application before arriving and double check when they are there.

The people attempting to apply stand outside for hours before they are given instructions and, even then, they are not given complete information about the process and have to figure it out together. The list of problems with this process goes on and on. Curiously, Chief Passport Officer Siobhan Dean stated there is no quota system and no one is turned away from the Passport Office, but later said they “have to cut off at a certain point”. According to reports, that point is before noon.

How hard can it be to determine how many people can be served in one day? Why wouldn’t the Passport Office have a separate day for first-time applicants until they acquire the additional space it desperately needs.

Burnside’s recommendations include a website with accurate information on the process and necessary components for the application, production of an information pamphlet, and working phone lines that are answered during the business day. She also recommended proper sitting with protection from the elements since people have to wait outside for hours. She also included the need to overhaul the registration process through the use of technology to allow people to arrive during daylight hours and be processed in a reasonable amount of time.

These recommendations are from a Bahamian woman who has gone through the experience and taken note of the issues. She thought about them and got to work on a list of recommendations. Why has no one at the Passport Office been able to do this, or suggest that someone observe the process and submit recommendations? None of them are difficult to implement, requiring little more than a dedicated that cares about the level service available to the public. Given that a passport is required not only for travel, but for a range of transactions (which is ridiculous and cost-prohibitive) including job applications, it should be a priority to ensure every Bahamian is able to obtain and renew it.

The government extends deadlines when it suits, ignores complaints until people are at risk and fails to improve its service to the Bahamian public. Priorities may not become clear, but we are able to see what does not matter.

Transparency is only ever important to the opposition, and when it rises to power, to hell with those looking on, trying to determine exactly what is taking place.

Children are the future, but good luck to them in surviving filthy school environments because it costs too much money to protect their health. Best wishes to the people outside of the Passport Office in the dark, standing for hours in hope they did not take the morning off from work for no reason.

It is apparent this administration has bigger things to worry about, like increasing taxes while reducing services (in amount and quality). It will not simply choose to do better. We have to demand it.

The Opposition has to be vocal, not only when it is slighted, or participating in petty back-and-forth through the media. It needs to speak to our interests in needs, amplifying our voices.

We have to use whatever power we have to make it absolutely necessary for the current administration to attend to us. We are not even at the halfway point yet and look at our position. It is energized and determined to serve itself.

We need turn “sick and tired” into a boldness to demand what is due to us as citizens of The Bahamas. 2022 is too far away, and we cannot afford to wait. It is time we learn to advocate for ourselves because what we are getting is nowhere near good enough.

TRIBUNE: TAKE A GOOD LOOK AT YOUR ALICIA WALLACE CAPTION!

EXCELLENT article, Ms. Wallace. Government, BUCK UP! You are a total disgrace. The shambles that is the Bahamas Government grows with each incoming party. The longer the status quo remains the "wusser" it gets!