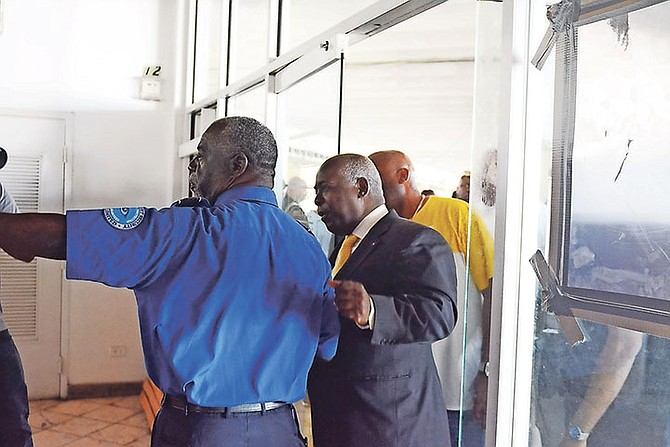 BAHAMIANS have been “deceived” by the government regarding the relocation of the General Post Office, Progressive Liberal Party leader Philip “Brave” Davis said yesterday.

He was referring to the timelines that have been previously set by the government for the GPO to be moved from the rundown East Hill Street building to the Town Centre Mall.

Initially, Transport and Local Government Minister Renward Wells said the move was slated to happen before Christmas 2018. However this was delayed to January this year and then he said this date was pushed to mid-February.

Asked last week at Cabinet for an update, Mr Wells said he would give one in two weeks.

But from the looks of the site yesterday, Mr Davis said it could be months before the work is complete and the relocation carried out.

Mr Davis led a group of party executives, supporters and reporters on what he hoped would be a tour of the site, however, a security officer told the group he could not allow this. The guard insisted he not only needed the names of everyone one in the group, but said there was a requirement for each person to wear hard hats and steel toe boots.

However, The Tribune noted that only one construction worker of several near the entrance of the building was wearing a hard hat.

Ultimately, the group was only allowed inside the main entrance of the building, but no further. Mr Davis admitted that the Official Opposition did not seek permission to access the construction site.

Although the remainder of the project could not be seen, what was apparent was that there is much work to be done. There were what appeared to be unopened boxes containing new postal boxes, thick dust, electrical wiring visible in the ceiling and ceiling tiles not in place.

Some workers were also standing on an elevation well above the ground, but were not protected by a railing.

“I think we were deceived by the timelines and I think the timeline was put forward to get the permission that they required from their own members to engage the lease of this building,” Mr Davis said in response to a question from The Tribune about the initial timeline and differing dates that came after.

“From my observation, this is the finishing part of it, I see months of work left to be done,” Mr Davis, former minister of works, under the previous Christie administration said.

He said the government needed to give an account to Bahamians when the work there would be complete.

“It’s disrupting businesses, impacting on the economy and the cries for a solution is being heard loud and clear. Whether they are hearing it is another matter. We trust this visit today will at least awaken them to listen.”

In a prepared statement, Mr Davis said what has happened to date is a dereliction of public duty by the Minnis administration.

“The PLP is very concerned about the prolonged delay in regularising postal services in New Providence and the negative impact this is having on postal workers, businesses, the general public and the economy at large,” he said.

“This is particularly so in view of the fact that this administration met a process in place where ultimately the Bahamian people would have owned a custom-built and designed building to facilitate 21st century postal operations.

“We draw this wanton dereliction of public duty by this FNM government to the attention of the general public today.

“Had the incoming FNM government not interrupted the retrofit project at the former Independence Shopping Centre, that project would have been completed and the Bahamian people would have enjoyed regularised postal services around December 2017, more than one year ago.”

He continued: “Additionally, the glaring conflict of interest involving a sitting minister of the Cabinet is an ongoing concern; a decision by the government not supported by the opposition caucus in Parliament.

“This corrupt and controversial move will cost the Bahamian people literally millions of tax dollars in the way of a redundant breach of contract settlement currently before the courts, and more, particularly in light of repeated delays.

“This straightforward project was turned into an expensive disaster from the beginning because the FNM was motivated and driven by partisan politics, special interest and not the public interest. The rushed purchase and selection the Gladstone Road property proved to be a waste of time and money because it was poorly thought out and executed and the government was forced to abandon that route.”

The Minnis administration had initially said the GPO would be moved to the old Phil’s Food Services building on Gladstone Road before abandoning that idea for Town Centre Mall. The mall is owned by Minister of Immigration Brent Symonette.

“In a last ditch effort to save face and embarrassment, the government guaranteed the public that this Town Centre Mall retrofit would have been completed by December 15, 2018,” Mr Davis said. “It is now March 19, 2019, more than three months later and it remains unclear when this project will be completed and regular public postal services restored.”

Ya got dat right! Wells is as brain-dead as they come.

Brave say the PLP is concern about the long delay....hummm real interesting.. the same group of people who didn't even do anything on their watch...these guys are full of it. No matter how long it takes , it progress. People ain't stupid as they make them out to be. I don't even live there an to me that is better late than never... maybe others see it differently.

Maybe he can tell us all about Shane's sweetheart deal at the old mall across the road.

So what if there is a delay. At least this government will deliver a new post office. Something the PLP failed to do in Five whole years. Most large scale renovation projects have delays especially when there are items to be imported all the way from China

Agreed Reality, when the smoke is all cleared only thing matters is better working conditions. It what the workers deserve, not more nothing less.

Meanwhile the Symonette family is laughing all the way to the bank and the other cabinet ministers are all falling over themselves trying to cut similar sweet deals now that they know the coast is clear for them to do so as far as conflicts of interest are concerned. LMAO

Yes, yes and yes a comrade substantive red cabinet minister smiling all way bank deposit he PeoplesPublicPurse's monthly rental cheques - whilst the much overdue to have been renovated, up and delivering we beloved Queen's Royal Mail, is but another sitting empty red shirts promise biting the dust, yes, no..... you just cant make this up, yes, no but don't worry - pretend remain all happy citisens and residents...... And do to a weak opposition to red shirts, this incompetency too shall pass with little to no PeoplePublic' calls public "rungin' of cowbells' outrage in front Queen Victoria's Statue, Rawson Square and ups and downs Bay Street Street protesting occupations, yes, no?

But bogart said: "No, No and No, and did said you say BLACK WOMEN SUCK from gibberish3214321Loser Sends Hate Mail sent 9 minutes ago Black women are like you are at the bottom of the dating pole. Yes, Asian males have it bad too but the ratio of Asian female to Asian male dating out is 2:1. For blacks? ALMOST EVERY "SUCCESSFUL NEGRO" in the media has a non-black mother. Drake, Zendaya, Tyga, Beyonce...and so many more are all produced from White mothers! If black women are so great, why do your men prefer White women? Why are 70% black women single?" And Comrade bogart want know, yes not no, but yes, yes, if you done gat all dat Comrade TalRussell, say you him what?

"Uncle Tommy" Wells said the Post office would be open January l, 2019 even as he knew it was a public holiday.

Brave always the planner. I wish he would fly to the states with his entourage for a surprise visit to the White House.