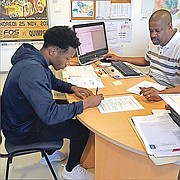 DOMINICK Bridgewater made Bahamian basketball history by becoming the first player to make the jump straight from high school to the professional ranks.

Bridgewater, 18, signed a Junior Pro contract with the FOS Provence Basketball Byers Club, making him eligible to be named to the organisation’s Pro-A roster for the remainder of the season.For the past seven months, he has been a member of the club’s Epoirs (Junior League - U21).

His season thus far was highlighted when he was named the MVP of a preseason tournament (18 points and 11 assists per game) hosted in Tain, France.

The Epoirs team spent much of the regular season working against the Byers A-League team, which includes fellow Bahamian player Jaraun “Kino” Burrows. It was Burrows who eventually facilitated Bridgewater’s move to the French club. “My first intention was to go to Division I because that’s where I saw Buddy Hield and so many other guys play.

“After the US Embassy denied me [my student VISA], I thought it was hopeless, but this opportunity has been life-changing,” Bridgewater said.

“The best part about life in France is getting in the gym four times a day, working on my game, getting better, getting stronger and off the court meeting new people. Living in a different country, different atmosphere, eating different food, just being a part of the culture, it’s changed me as a person off the court as well.”

The Epoirs team also competes in the league consisting of all of the junior divisions of each team in LNB French Pro A League.

“My game changed so much the last few months because I feel like I’ve gotten better every day, working on the areas I need to all the time. Shooting, dribbling, learning how to pass, my vision has definitely gotten better and just thinking through the game more,” Bridgewater said.

“Coming out of the junior league I had more freedom to do what I want on the court but at the next level I know I have to work even harder, be more efficient and learn from the people around me everyday.”

Bridgewater recently had an opportunity to make his senior national team debut as a member of team Bahamas that finished second among Group Phase A at the AmeriCup 2021 Pre-Qualifiers in Belize. The team concluded with a 2-1 record.

Locally, he completed an accomplished tenure on the court for the Anatol Rodgers Timberwolves following a brief stint at Carol City High School in Miami, Florida.

led the team to the 2017 GSSSA Senior Boys Championship, for the past two editions of the National High School Championships, he was the tournament’s leading scorer and was named an all-tournament selection.

At the junior national team level, Bridgewater was also a member of a pair of squads to represent the country.

In 2016, he won MVP en route to leading the Bahamas to the gold medal of the Caribbean Basketball Confederation’s Under-16 Tournament when he averaged 18.2 points and 3.8 assists per game. He followed with an appearance at the Centrobasket Under-17 Championships where he averaged 24.8 points, 8.4 rebounds and 3.6 assists per game.

Bridgewater encouraged others to follow his path and explore all options in their pursuit. “I would tell young players, work hard, give it everything you have because no matter what happens, you never let anyone kill your dreams.”

Gee, Renaldo, wouldn't it have been nice if you explained why his visa was denied? Like so many other things, I give up on "journalism" in this country.