Tourism ‘Firing On All Cylinders’ Via 9% Rise 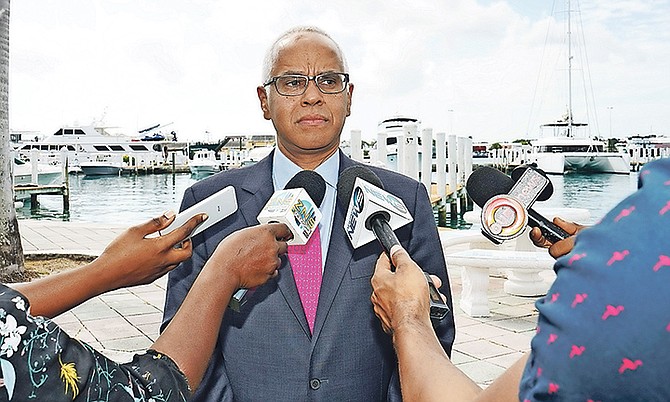 A Cabinet minister yesterday said Bahamian tourism is “firing on all cylinders” with forward stopover bookings for the next three months some nine percent ahead of 2018 comparatives.

Dionisio D’Aguilar, minister of tourism and aviation, revealed that forward booking indicators for April - which contains the Easter weekend - were up 15.6 percent year-over-year due to the timing of when the holiday fell.

“The Bahamas is experiencing unprecedented growth. The record year up until recently was 2014, with 5.3m [total visitors], and we have now blown that way with 6.6m. We’re hoping that this year that would continue, maybe not at the same rate of growth, that’s a bit ambitious,” he conceded at a press conference yesterday.

“I think we have done an excellent job marketing the destination. We started our new campaign with Lenny Kravitz, which has created enormous brand awareness. The Bahamas is a hot place to come to. What has suddenly changed? New inventory [Baha Mar], new brand campaign, we’re firing on all cylinders and it’s having a significant impact on our economy.”

Ministry of Tourism data shows forward bookings over the next three months, the March to May 2019 period, are running nine percent ahead for international arrivals. Its data partner, Forward Keys, which tracks and reports inbound visitor data from key markets, reported that international arrivals to The Bahamas grew by 15 percent in January 2019 versus January 2018.

“Several key markets registered double digit growth,” Mr D’Aguilar said. “In February, international arrivals increased by 11 percent year-over-year. The forward booking situation for the next three months, March to May is optimistic, with forward bookings running nine percent ahead for international arrivals. April, which is ahead by 15.6 percent, shows the most favourable outlook.”

The figures revealed yesterday indicate that The Bahamas’ tourism performance is broadly in line with the forecast given by Mr D’Aguilar in January, when he told Tribune Business that projected air arrivals would be up 16 percent for three of 2019’s first four months.

“Initial indications are that air arrivals for the month of January, air arrivals are projected up by 15.6 percent. February will be up 16.3 percent, and March down by 2.8 percent. April is forecast to be up by 16.8 percent.”

Mr D’Aguilar explained that the year-over-year forward bookings comparison for March was down due to the timing of Easter. Whereas that peak travel period fell at the end of March in 2018, the holiday this year occurs further into April.

He added that the ForwardKeys data, while representing “arrivals on the books in The Bahamas”, did not cover the entire market and only accounted for several key tourist feeder markets for this nation - meaning that stopover arrival numbers could ultimately turn out to be even greater than these forecasts.

The Ministry of Tourism yesterday confirmed that airlift capacity to The Bahamas grew by 20 per cent in January year-over-year, “with a solid seat growth from the best connected international markets, the US, 23.9 percent, and Canada, 12.7 percent”. The trend has continued, as international air capacity grew by nearly 12 per cent year-over-year in February.

and how better off are Bahamians today ?

Any, not just the political elite, remembering how Stafford Sands said in the 1960's Bahamians will be the big benefactors with the growth of tourism, successive governments has unlawfully mislead the average Bahamian for decades

This dishonest yapping white-haired poodle is a corrupt twirp of the highest order.

If our economy is doing as great as he says, then he needs to explain why we are being taxed to death and our national debt continues to grow.

DeAguilar failed to mention that half of the Caribbean is still in hurricane recovery mode. Some still do not have 100% power restored and airports and docking facilities are still being reconstructed. Yes we benefited but is the growth sustainable ?

"I think we have done an excellent job marketing the destination. We started our new campaign with Lenny Kravitz, which has created enormous brand awareness. The Bahamas is a hot place to come to. What has suddenly changed? New inventory [Baha Mar], new brand campaign, we’re firing on all cylinders and it’s having a significant impact on our economy."

Tourism is too hyper focused on how great the marketing campaign is. They need to Bahamianize the product and make it exciting. "Then" market the dickens out of a unique "experience".

No matter how much tourism is firing, unless and until that translates into the average Bahamians being able to put food on the table and clothes on their backs there still a lot of work to do. But you have done well Mr D’Aguliar.. can’t find one lil job to give Obie ay. Hear he hurting bad