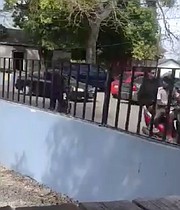 The first video is a 15-second clip depicting the moments right before two men were shot, one fatally, in broad daylight at the Fox Hill roundabout. Although the shooting itself is not visible on camera, both suspected perpetrators, who were riding a moped, can be seen in the video.

“They shot my husband,” a woman can be heard saying in the background of the 59-second clip.

He also confirmed police are in possession of the Fox Hill video, adding officers are finding it “quite helpful” to the investigation.

CSP Cash made these remarks while speaking to reporters on the sidelines of a homicide that occurred on Wilton and Market Streets on Tuesday.

When asked if police are aware of the video showing the suspects in the Fox Hill shooting, CSP Cash replied: “Yes, yes, that is a video that’s in the possession of the police. How it got out in social media, we are unaware of that. But yes, we have that video in our possession.

“That video was quite helpful to the investigation in assisting us in proving who these persons were responsible for that latest homicide in Fox Hill,” he added.

In the video, the people recording can initially be heard calling toward a man with a guitar, who is walking along the path inside the roundabout toward the street.

In the distance, the moped carrying the two suspects can be seen approaching the area. The driver is wearing a white t-shirt and helmet while the second man wears a black hoodie and shades. The moped swiftly passes the man with the guitar and moves out of frame.

And then, shots are fired.

The jovial conversation of the men recording is instantly replaced by shouts and gasps. At least seven shots ring out before the video ends.

Police later confirmed that two men were shot. One died at the scene and the other is in hospital. At the time, CSP Cash added that officers from the Mobile Unit were patrolling the area when the incident occurred and actually witnessed the shooting.

Officers pursued the moped through Fox Hill to the Blueberry Hill area. There the suspects escaped into bushes opposite a church. Police later recovered the moped and helmet.

Regarding the Nassau Village victim, CSP Cash said: “I can confirm that the ID has been completed and he is a Chinese national who has residency in the Bahamas.”

The second video begins with this victim mopping tiles behind the store’s counter.

The gunman, dressed in a blue hoodie with a black cloth covering his face, barges in and immediately points the gun directly at the victim.

In a tense moment, the victim raises the mop, his only weapon of defence, at the gunman.

The victim slowly walks toward the gunman, who angrily shoves the mop away. The victim lowers the mop, however the gunman fires anyway, shooting him in the side.

The victim staggers and slowly sinks to the ground. The perpetrator grabs the man by the back of his collar, points the gun to the back of his head and then drags him across the floor.

As this occurs, another perpetrator, whose face and neck are covered in white t-shirts, enters the camera’s frame. He forces a second man in the establishment into the area by the counter.

The first gunman initially points his weapon at this second man, before turning to drag the victim who was shot in the opposite direction, eventually forcing him to his feet and taking him out of the frame.

Both gunmen wore gloves. The shooting victim was taken to the hospital where he later died.

• Yesterday, the Chinese Embassy in Nassau urged the Bahamian government to take “further measures” to protect both locals and foreigners in the wake of the recent murder of a Chinese national in Nassau Village.

Xiang Song, 40, was shot during a suspected armed robbery at a shop on Taylor Street, Nassau Village on Sunday night. He was taken to hospital where he later died.

Song was the father of a one-year-old child and had lived in The Bahamas for several years, Haigang Yin, charge d’affaires of the Chinese Embassy, told The Tribune yesterday.

Assistant Superintendent of Police Michael Johnson yesterday confirmed that Song was the proprietor of the business involved in the incident.

Mr Yin also noted the embassy has been in contact with both the Ministry of Foreign Affairs and police and is “urging” government agencies to investigate the matter and “bring criminals to justice” as soon as possible.

“We also noticed that tragic news,” Mr Yin noted in a statement released to The Tribune yesterday.

“The embassy had met the family of the victim on March 19 and expressed our deepest condolences. The embassy is now providing all necessary assistance to the family.

“The embassy has contacted the foreign ministry as well as the (police), urging the relevant departments to investigate this case and bring the criminals to justice ASAP.

“Also, the embassy has urged the government of the Bahamas to take further measures to protect the people, including the locals and the foreigners in this country.”

Anyone with information related to these or any other matters is asked to call police at 919, 502-9991 or Crime Stoppers at 328-TIPS.

Virtual reality! The video of the guy who shot up a hundred persons in New Zealand was also streamed live to 2.5 million people before Facebook was able to take it down. The major difference? That one was planned by the perpetrator of the crime. The two here were from video from on the victims side. The one on Fox Hill was so unreal, so movie like, so ‘Boyz in the hood ish’ , something that was so unknown to this country not too long ago. Guys on the park having fun. Police right there, not too far away and death and mayhem comes riding on a moped and changes everything with the squeeze of a trigger. Not once, not twice, but more than half a dozen times in a matter of seconds. And in that instance, a life is taken. Dead. To be no more. And the shooting in Nassau Village. The victim mopping the floor after a long, hard day. And the hoodlooms appear, weapons drawn. Overdressed even for a Hollywood movie. And again shots are fired and a life is taken. Surreal, numbing, bone chilling, but yet so common. So everyday. So what now?

Triple the size of the police force for starters ..

So sad that even the Chinese aren't safe in this country.

What have we become? A nation of robbers and thieves with no respect for life or personal property. @John you ask a very valid question....... "so what now?"

My condolences to all who lost love ones in these tragic incidents.