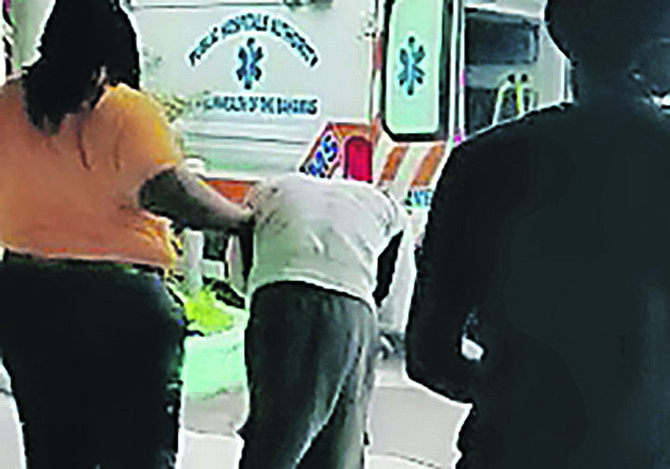 The suspect is helped to a waiting ambulance in a still from the video.

A LAWYER whose client was taken from the Central Detective Unit by emergency medical services this week say pictures capture the bruises the man allegedly sustained in custody.

The pictures, taken at the Elizabeth Estates Police Station on Tuesday night, were seen by The Tribune yesterday. They show bruises on the man’s arm and ribs. According to Christina Galanos, the man claimed he was shocked with a Taser and beaten by about seven officers who wanted information from him. She said he also alleged his “chest and side tightened after the beating when he was placed in a cell at CDU,” prompting the call for an ambulance.

Chief Superintendent of Police Solomon Cash did not respond to The Tribune’s messages concerning the matter yesterday. On Tuesday he said officers told him the man experienced a health problem and needed medical attention.

For his part, National Security Minister Marvin Dames said lawyers like Ms Galanos “know the process” for dealing with their concerns, suggesting they can make a complaint.

He told reporters: “I often say that we have a right to ensure and protect the rights of each and every Bahamian no matter who they are, but while we focus on the defence attorney, let’s focus on the victims of crime, those individuals who are maimed and attacked.

“I don’t see many people standing up for them. Let’s focus on those Bahamians who stand up and say I will not allow the few in our society to destroy it. And then they have to be put into witness protection because those few then turn their venom toward them.

“I mean everyone has a right, so if someone feels aggrieved there is a process by which to do that. But I am not here to speak or defend any defence attorney. Let’s work on making this Bahamas better for every Bahamian.”

Ms Galanos, in response, said the current “processes” are flawed in part because the Complaints and Corruption Unit of the RBPF cannot be trusted to investigate fellow officers.

“The proper and correct process is that you thoroughly investigate these matters and the correct process does not involve beating suspects under any circumstances unless they are posing a threat or they are putting someone’s life in danger and you have to respond to that in kind,” she said. “It’s because defence counsel know the process that we are challenging what is going on so I agree with them, we know the process. As minister of national security he ought to know the process as well and we say based on all that has transpired in a couple of weeks that the process is not being followed.”

“If they want to prove once and for all that this is not going on, let cameras cover every square inch of CDU and any other place that you interrogate someone,” she said. “And it has to be everywhere because if you just say CDU they may take suspects out to the beach and do what they want with them. Essentially, suspects should be on camera for the entire process. If he’s in the cell block, there should be a camera covering him in the cell block. If you move him from the cell block to an office to ask him some questions, there should be cameras in that office and along the walk-way. The cameras should be controlled by a separate command centre. From the point of his arrest to his time in the car to when he walks in the station, everything should be covered.”

Critics have criticised the investigation process into allegations against police.

Last week’s US Human Rights Report revealed that the Police Complaints Inspectorate, which should oversee the police Complaints and Corruption Branch, hasn’t met since September 2017. Mr Dames, who hasn’t appointed anyone to the body, suggested there is a “process” underway to deal with this.

“…We are working on recruitment,” he said. “This is not an overnight fix… You know there is a view that we are going to solve this overnight, and (the public is) saying this is becoming more and more––where are the statistics on it? You see, we are living in a world where every incident is magnified. And every incident is one too many, don’t get me wrong.

“We are taking steps to improve the relations between the police and the community. We have done more in this administration than in any administration in the history of this country. As I said before, the training that we are doing, and you can go down to the police college and see the training, the sensitivity training and the training where persons from civil society are involved, we have never seen that before. I mean we may have seen it, very limited, but we are seeing more of that today. So the point that I am making is, this is a process and steps are being taken to revolutionize and professionalize these agencies so that it will minimise some of the problems that we are seeing out there.

“And recognise too, that while there are legitimate complaints, we understand too that there are individuals who go out there and make false complaints against police. Once that is done, that person’s career is put on pause,” Mr Dames said.

I hope I never have a 'health problem' that is caused by being beaten by 7 men. Wow they must be proud of themselves...7 on 1. I hope they didn't get hurt!!

National Security Minister Marvin Dames does not seem overly concerned. If there is no problem they would have installed surveillance cameras long ago. Don't hear Dames backing this initiative. Seems that he sidesteps many important issues; too much of a politician to be an effective Leader of National Security........

Yeah Dames couldn't care less. As long as it's not anyone close to him, it doesn't matter.
Not to worry... everyone will get their comeuppance, whether in this life or the next.

What the police don't understand is that when you create a monster that seem monster will turn on you and your love ones. This is already happening. Assistant Commissioner Reckley wife was picked up and made to travel to Nassau without even the courtesy of allowing her to put on proper attire. I heard an inspector complained about his son been pickup and beaten by officers. Even the politicians who thought they were immune are now experiencing the wrath of this monster.

I agree with all the top comments , buuuuuttt....every Bahamian knows you are innocent til proven guilty, so why tell the truth? the chances of getting off with a lie when they break into your houses, steal your cars and kill you is pretty much a good one....Bahamians lie...alot.. so just how does one get to know the truth.. hummm.. these case has 2 sides... the police wrong for bruatlity... but how would anyone be change.. without a confession? the the powers that be cud say when you don't tell the truth, ok you cud walk due to lack of evidence?...so everyone go free...I notice everyone crying fowl when they are arrested, some fake limping in front of the camera....we need to think about this from all sides...no dis respect to no one.

There's no " all sides", you sound like Trump speaking after the white supremicist drove his car right over some womans body. This is wrong. Fullstop. Guess what will happen. His case will be thrown out of court if it ever makes it because they beat him. Go to school learn how to do investigative work and interrogate people properly.

And btw where is Marvin?

You reap what you sow,

I wonder when the thugs will start knocking off the cops for the beatings???

"his part, National Security Minister Marvin Dames said lawyers like Ms Galanos “know the process” for dealing with their concerns, suggesting they can make a complaint.

This is not enough Mr Dames, you know what's happening. They are killing people. If this were your son what would you do? Police officers do not have the right to be judge jury and executioner no matter what crime the prisoner is believed to have committed.

You are so right. Never mind if it was his kid, what if it was him,perhaps then he think differently about what police doing.

If I could draw, I'd do a comic with Dames get beats from the cops, and someone telling him he can file a complaint,,,,,,lol

I suggest that the FNM, unfortunately, has already lost the election. FNMs who wanted change thinking what's the point, DNA voters een backing you again and disaffected PLPs thinking it was better before. The entire parliament might as well close shop and go to the beach for the next 3 years. Nobody will forget this, Oban or like a thief in the night Disney dealing, no matter what good deeds they do. Same mistake the PLP made, ignored the cries of the public for 4 years then thought they could buy affection in the run-up to the election.

ThisIsOurs you've made some good points on this board.
To be honest, FNM, PLP- I don't trust any of them anymore. With the DNA, it doesn't seem like they ever gathered enough steam.

So it seems like we'll go through this endless cycle of FNM then PLP then FNM then PLP.
I really wish there were other real choices to make but it's sad that we seem to end up with the same tomfoolery no matter what - each election cycle. It's a bit disheartening.

Yep. Disheartening is the right word

I really don't see the problem with this beating. I think ALL Bahamians, each and every one of us, should be taken down to CDU and given a good beating at least once a year. Might help to straighten things out in general. Knock some sense into us, as a whole. Yep. Good idea, for sure. I'm patting myself on the back for this one :-)

You go first. The rest of us gonna watch to see if you make it after the second tase.