Insight: Playing It Safe When Friends Fall Out 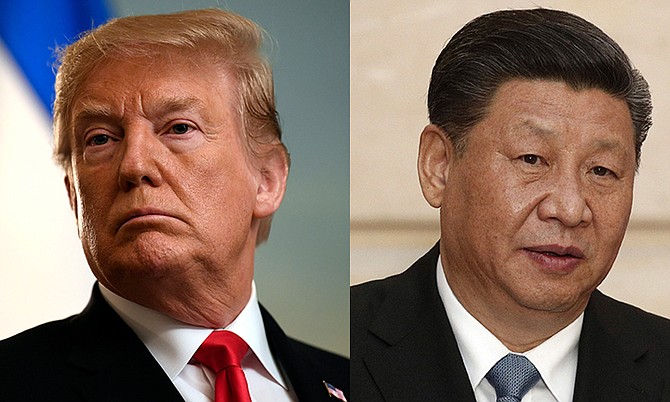 SPECTATORS of the mounting tension between economic superpowers – the United States and China – have had much to talk about this week with both countries trading barbs in the lead-up to President Donald Trump meeting Caribbean leaders in Palm Beach on Friday.

For those of us who were paying attention to the US pPresidential election, what’s taking place now should come as no surprise. Since 2014, when Mr Trump stated publicly China was not America’s friend in trade relations, anyone could see the tension between these economic superpowers would inevitably come to a head after his victory.

Since becoming President, Trump has hit China hard with tariffs – $250bn in tariffs on Chinese goods and threats of an additional $267bn in local products if they sought retaliation.

Although both nations have delayed implementing tariffs as they try work through their trade dispute more civilly since Presidents Trump and Xi Jinping met at the G-20 Summit, the recent statement from Capitol Hill indicates Trump is still on the offensive.

Certainly, China’s rapid response showed the country’s leaders did not take kindly to the US President’s statement or any tampering with diplomatic relations in the Caribbean.

“Facing the fabricated lies and irresponsible accusations, we have faith in the people of The Bahamas with whom rests the final judgment. We are confident that the Bahamian people and government will not be misled by others.”

Yin’s counterpart at the American embassy did not hesitate to fire back – unwavering in the US position on China’s footprint in the region.

Stephanie Bowers, Charge d’Affaires at the US Embassy, said: “We encourage all leaders to choose high-quality, transparent, and inclusive foreign investment, and we want to ensure development financing does not result in unsustainable debt. “When evaluating types of partnerships and investment relationships, leaders must ensure they are getting the best deal for their country and their people over the long term.”

She added: “Economic engagement should meet international best practices in terms of transparency, debt sustainability, and the needs and concerns of local communities.”

Now, here we are – caught in the middle of a fight reminiscent of a custody battle where it is in our best interest not to be seen as picking a side. Tourism accounts for 80 percent of the country’s GDP and American tourists account for the majority of the six million visitor arrivals annually.

That is a lot of butter for our bread.

Also, Bahamian consumers spend large portions of their income in the US buying goods and services there.

It is simply in our best interest to have a great relationship with the US.

On the other hand, since 2008, when the Great Recession took place, the US understandably placed its focus inward, which was around the same time China’s “Go Out” policy began to heat up in the region – allowing it to take advantage of building relationships in countries that benefited from having a cash-rich ally in China.

The Bahamas, inparticular, Sarkis Izmirlian – former Baha Mar CEO – was able to benefit amid economic uncertainty in the US. However, good faith relations between Izmirlian and the Chinese were short-lived after a fallout that eventually led to Baha Mar being bought out by the Chengs – a wealthy Chinese family with strong political ties.

Since that time, China has cemented its foothold in The Bahamas and the rest of the Caribbean in the hospitality and construction industries, as well as development projects focused on building roads and government buildings throughout the Caribbean. Additionally, they offer financing with stipulations of importing thousands of Chinese labourers as a condition of their lending terms.

Undoubtedly, this becomes an issue as it prevents able-bodied locals from taking advantage of opportunities that should be available to them. Nonetheless, for governments of cash-strapped countries, they find such offers impossible to say no to.

China’s “debt diplomacy”, as it’s referred to by commentators critical of it how it conducts its geopolitical exploits, is its way of connecting with smaller, more vulnerable developing countries to advance its own agenda to one day outdo the US to become the world’s premier superpower – doing all of this with a smile and an open cheque book.

Realistically, with the US focused on getting its own house in order during the Great Recession, The Bahamas had to follow the money. Unfortunately, what we have witnessed, particularly with the last administration, was a weakening of our bargaining position.

Under the Christie administration, China was essentially given the keys to the kingdom. With so much power in its grasp, if China wanted to, a decision to shut down operations in The Bahamas could be a debilitating blow to our booming tourism industry. Chinese ownership of three major hotels - Baha Mar chief among them - accounts for a great deal of the room inventory on New Providence. With the country just coming off a historic year in tourism, we can ill-afford any rocky relations with China, as they are holding The Bahamas by the proverbial family jewels.

For now, we seem to have some cover. Though Chinese companies have not been strangers to leaving what have been referred to as “ghost towns” around the world, to go through so much trouble to open the $4.2bn Baha Mar only to see it once again shuttered would be beyond nonsensical.

Additionally, based on what the prime minister said was discussed at the meeting with President Trump pertinent to China, it sounds as though he handled it well by making it clear China is a friend to The Bahamas, and for the foreseeable future, that perhaps should not change. They currently have too much skin in the game.

This is quite a precarious situation we find ourselves in.

The reality is we don’t have the luxury to ruffle the feathers of either country. We simply don’t have that kind of bargaining position and there are billions in foreign direct investment spent by both countries - China having shown the most interest in recent years.

It is likely this lover’s quarrel will eventually be resolved. However, for us, as a country trying to climb out of the ashes, the government has to focus on policies that will make us less dependent and more insulated when economic superpowers go to fisticuffs.

Nonsense. Being a big weak wishy-washy sissy is not the answer. Like the old saying says ... if you stand for nothing you will fall for anything.

Very good words. However, I just took my evening stroll around Baha Mar, and I have to say it looks like progress to me. It's hard to see how The Bahamas could have made it, had Baha Mar not come around. What is the answer, I'm not completely sure. I think the answer may be to accept China's current holdings as positive for The Bahamas, but to halt China's investments moving forward -- they have enough. The key with China, as with gambling, is to know when it's time to walk away with your winnings, or you lose everything. It is likely China will offer our cash-strapped Government "debt trap" loans in the near future; these must not happen. We have enough China now. Time to bring in some other investors from US, India, Germany etc.

TheMadHatter, such an appropriate nom de plume. (or maybe US sychophant).

All of this could have been avoided if doc and Henfield had keep quiet. they both had opposing views. There are a lot of crazy people out there Malcom see what you can do to help them,

While you spin this FNM Government continues to blunder along.

Doc said China is a friend to the Bahamas?? That is not what he a Mr: D'Aguilar said before remember that Strachan. when the PLP was in power.. doc them changed their tongue .quickly who can believe anything that comes out of their mouths. It all depends on what day it is and what lie they decide to tell.

trump is such a moron, his trade war have resulted in increasing the trade deficit and the idiot brags about how much the US has taken in since the tariffs were introduced. Meanwhile the only people paying his tariffs are Americans.... The man is an idiot...

Will the republican party ever not be the party of morons????

Time to eliminate the electoral college, so far for the 21st century its given the US bush and trump. Two individuals with the IQ of plastic.....

I guess you want Hillary??

Typical worthless Tribune reporter who writes an article that rehashes (no plagiarizes) posts to this web site by commenters like ourselves. It seems Malcolm Strachan is incapable of an original thought on just about anything. LMAO

OMG Hillary was the only actual choice! Trump is the exact opposite of what's needed in the oval office. That's a no brainer. You'd have to be extremely immoral and unethical to support trump. Or dumb as a rock....