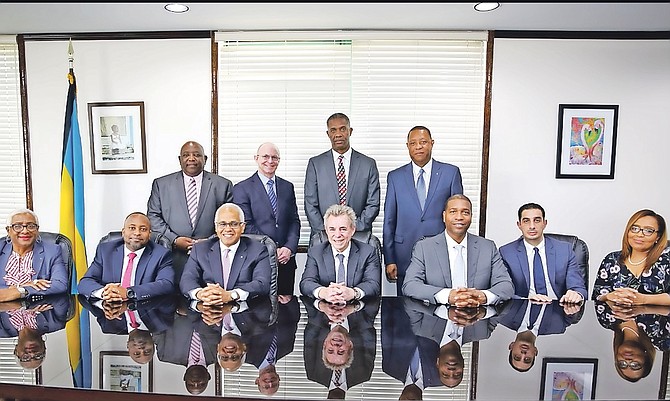 The winning Grand Lucayan bidder was yesterday said to be “very close to perfection” with its “game-changing destination” solution for resurrecting Freeport’s tourism economy.

Dionisio D’Aguilar, minister of tourism and aviation, voiced optimism that Grand Bahama is now “on the path to the promised land” as he confirmed previous Tribune Business revelations that the ITM Group/Royal Caribbean joint venture had been selected as the resort’s preferred purchaser.

Speaking after the government signed a Letter of Intent (LOI) with the cruise line and Mexican port developer, triggering exclusive negotiations between the parties for the Grand Lucayan’s sale, Mr D’Aguilar compared their proposal’s potential impact to the effect Disney World has had on Orlando.

He explained that it envisions combining Port Lucaya and Freeport Harbour into a “unique destination” that will set Grand Bahama apart from its competitors, not just Florida and other Caribbean nations, but Nassau/Paradise Island and the Family Islands.

The ITM Group/Royal Caribbean consortium is proposing to invest $195m in phase one of its project alone over a 24-month period, creating around 2,000 jobs. It ultimately plans to bring an extra two million cruise passengers to Grand Bahama every year by transforming the area into “a world class destination”.

As previously detailed by Tribune Business, which exclusively revealed the joint venture and its plans for Freeport in early February, the proposal focuses on developing water-based adventure theme parks at both Freeport Harbour and around the resort. The Grand Lucayan will be upgraded to “five-star hotel accommodation”, and feature multiple gaming, entertainment and restaurant experiences.

“The most amazing thing about this project is it creates a destination,” Mr D’Aguilar told Tribune Business. “It’s an incredible water park. I want you to think of Disney and Orlando. Disney creates a reason for people to go to Orlando. It’s not the hotel; there’s a reason to go to the destination.

“ITM and Royal Caribbean, I wouldn’t necessarily say it’s perfect, but they come very close to perfecting this type of construct. ITM builds water parks and signs up companies to guarantee traffic. They have water parks and run a hotel in Mexico, so they have hotel experience.

“Combine that with Royal Caribbean’s marketing machinery, and the reach they have, and we felt this had the greatest chance of success,” Mr D’Aguilar continued. “We didn’t want to sell to an investor who couldn’t articulate a reason to come to the resort.

“We wanted to create a destination, a reason for people to come to what is a beautiful beach, a beautiful resort, and couple that with a water park.”

Michael Scott, chairman of the Government-owned Lucayan Renewal Holdings vehicle, which currently controls the resort, said the ITM Group/Royal Caribbean offer was the stand-out candidate from among the 62 “expressions of interest” received.

Some 11 firm “offer letters” were ultimately submitted, but Mr Scott indicated none came close to matching the breadth of vision, track record and financing capabilities offered by the joint venture.

He explained that the ITM/Royal Caribbean proposal will generate both stopover and sea arrivals, and day and longer-stay traffic, setting it apart in terms of the variety of visitors it will seek to attract.

“This is a lateral, out-of-the box approach because it involves sealift as well as airlift, and day traffic as well as sea traffic,” Mr Scott told Tribune Business. “It’s three-fold. It’s the resort, transportation links between the harbour and Port Lucaya, and the complete redevelopment of Freeport Harbour as an updated cruise terminal facility.

“It’s a game changer. It’s lateral, out-of-the-box. It’s not just involving a hotel. It’s involvement in a vision for the redevelopment of Port Lucaya and, by extension, the rest of Grand Bahama. It’s multi-dimensional, it’s imaginative, and it’s a lot different from the other offers we got which were entirely hotel-centric.

“The people of Grand Bahama should be ecstatic because there’s the prospect over the next two to three years of 2,000-3,000-plus jobs being created.”

Mr Scott added that Freeport Harbour, and its additional cruise berths, will not be for Royal Caribbean’s exclusive use. He explained that other cruise lines, such as Norwegian Cruise Lines (NCL) and Mediterranean Shipping Company (MSC), will be calling on the facility too.

His and Mr D’Aguilar’s sentiments were echoed by Senator Kwasi Thompson, minister of state for Grand Bahama, who pledged that negotiations with ITM/Royal Caribbean to finalise the Grand Lucayan’s sale and a Heads of Agreement for the project will begin “immediately”.

“When we first came to office we recognised we had to make Grand Bahama unique and distinct from the other islands,” Mr Thompson explained. “Our competition is not just Florida and the other Caribbean states; our competition is New Providence and Abaco and Exuma.

“We had to create something that is unique, and this is a project that does just that. For the first time it combines Freeport Harbour and the hotel property itself. It’s not just about building hotel rooms but creating experiences and attracting airlift and cruise passengers at the same time.

“It’s a game changer. Obviously we are only at the LOI stage. We now have to start negotiating the Heads of Agreement, the purchase agreement. We still have a lot of work to do, but if we fully complete - and we anticipate we will - it provides a game changer for us.”

Neither Mr Thompson nor Mr D’Aguilar provided a timeline for when the Heads of Agreement/purchase agreement will be complete, although LOIs typically grant a buyer around 90 days to conduct necessary due diligence on the assets and close.

“I want to move expeditiously,” Mr D’Aguilar told Tribune Business. “We have to go through the Heads of Agreement and purchase agreement, but I can see some light at the end of the tunnel. We’re on the right path and, notwithstanding any bumps in the road, hopefully we will get to the promised land.”

Still the selection of ITM/Royal Caribbean, and the LOIs signing, moves Freeport and Grand Bahama closer to ending a near two-and-a-half year nightmare that began with the closure of two of the Grand Lucayan’s three resort properties in the aftermath of Hurricane Matthew in October 2016.

Hutchison Whampoa, the resort’s immediate past owner, pocketed the hurricane insurance proceeds and refused to repair Matthew-related damage. That resulted in the departure of Memories, the Canadian resort operator, and the loss of around 500 jobs, while also taking around 1,000 rooms or 59 percent of the island’s total room inventory off-line.

Airlines slashed airlift in response to the drastic decline in demand as the Grand Lucayan suffered several “false starts” with efforts to ensure its re-opening. Two separate proposals by the Toronto-based Wynn Group, now carrying out its own development at Goodman’s Bay in Nassau, fell through after the Government deemed its multi-million dollar taxpayer subsidy demands too rich.

Faced with repeated threats by Hutchison Whampoa to close the resort, and inflict more misery on a moribund Freeport tourism economy that was losing multiple Port Lucaya Marketplace vendors weekly, the Minnis administration ultimately felt it had no choice but to acquire the Grand Lucayan for $65m.

The Government’s purchase closed on September 11, 2018, and yesterday’s LOI signing indicates it has made progress in delivering on promises that it would seek to exit Grand Lucayan ownership in the shortest possible timeframe to minimise taxpayer costs and exposure.

ITM’s initial plan called for Freeport Harbour to be turned into a water park called Harbour Village, complete with food and beverage facilities, at a cost of $56m. A similar water park at the Grand Lucayan, called Lucaya Islands, was pegged at a $30m investment.

Upgrading Freeport Harbour’s docking facilities and providing the transportation links were projected to require investments of $35m and $9.8m, respectively, with passenger spend from the two million new arrivals estimated at $180m per year. Some 18,000 indirect jobs could also be created if the proposal comes to fruition.

ITM operates a 600 room hotel and convention centre in Mexico, and has relationships with resort brands including Starwood, Hard Rock, Nobu and Accor. Its current port projects include Costa Maya and Mahahual in Mexico, and the port of Roatan in Honduras. ITM also has pending projects in Ensenada, Mexico; and Puerto Plata in the Dominican Republic.

Sounds good. However, does this mean no development in East End?

Good work here by the govt. Must give credit where credit is due.

This is the same man D'Aguilar who said the deal was far off. . They did go through 60 applications very quickly. This is not a sale. It is a letter of intent

The Truth is no one can believe anything that comes out of these FNM fellows mouths. I can not understand why they lie so,.

Let’s think positive. Grand Bahamas deserves a break. I love that Island. That’s where mom and I went mostly. That is where I met John. I left part of my heart there. I like Nassau but I feel lost and when I ask for help the men just want to spend time with me and the women just want me to go home. I’ve been told so many times that I’m not safe going over the hill and I don’t feel that way anywhere in Grand Bahamas. I eat with you, party with you and go to church with you. I love Bahamian people and your homes. I don’t travel to Nassau to stay at my gated hotel.

I responded to you yesterday in a hurry, it was time to go to work. I drive a school bus in the North Atlanta Area. When I met John was more than 30 years ago. I’ve talked to other members of his band and I know he is in Nassau. He was or is a security guard at the American Embassy. I saw his picture in this newspaper at the Beres Hammond concert, and I have came to Nassau many times without finding him. I have gone over the hill as they refer to it, but was convinced I shouldn’t do that alone. Anyway I just want to reconnect with one of the best people I’ve ever met. Thanks for listening to me. His name is John Braynen. With internet and cell phones it’s a shame that I can’t find him. We could easily stay in touch and arrange visits. Have a great day! We’re on spring break this week and hoping to spend time on the river trout fishing.

I also met John, as a young child and have been looking for him for years to say thank you! We should stay in touch to keep each other updated :)

A Bahamian man that was a great friend to my mom and I. My mom (Patti) and I (Lisa) Ashley is my daughter, anyway we spent several summers in GB. We had lots of friends. I met John at the Holiday Inn, he was a musician there. He was in a band known as John Boy and the Mustangs. I wasn’t a groupie. Patti and I spent time with him. I lost touch with him and have never quitvthinking about him. I dream of the day I see him again.