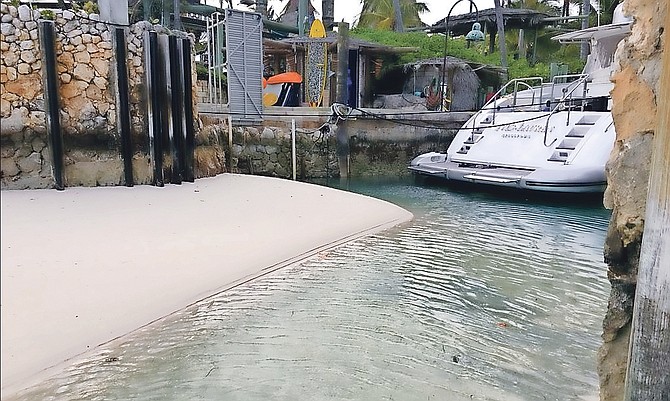 A PROMINENT attorney yesterday expressed concerns over the possibility that Canadian billionaire Peter Nygard may be “hiding” behind a Caribbean-based company in order to retrieve a yacht from his Lyford Cay home.

Fred Smith, QC, attorney for Save The Bays (STB), said his client “has not satisfied itself” that YL Limited, based in Saint Vincent, is not a “front” for or “alter ego” of the controversial Lyford Cay resident.

YL Ltd was seeking to apply to Director of Physical Planning Charles Zonicle for a one-off permit to dredge the area around the yacht, the Yves Lauren, which is “embedded” in a small marina at Nygard Cay.

YL Ltd, which claims it owns the yacht, and not Mr Nygard, tried to do so by obtaining an ex-parte order to be joined as an “interested party” to a third judicial review against Mr Nygard’s dredging activities, thus putting them at liberty to apply for the permit.

And that happened during ongoing negotiations between both sides on a lawful way to remove the yacht, and without notice to STB, Mr Smith said.

However, Mr Smith, as well as government attorneys, successfully opposed the ex-parte order granted by Justice Cheryl Grant-Thompson, on the grounds that obtaining the ex-parte order was not the “proper” way for YL Ltd to have the yacht removed.

Conversely, Mr Smith said the proper way to do things would have been to make an application to Mr Zonicle directly, who would have then had to satisfy himself that YL Ltd “is not Mr Nygard in disguise making the application.”

However, Mr Smith said assuming that YL Ltd is not a “front” company, STB would not object to it receiving a one-off permit to dredge the area around the yacht, provided the dredged material is placed anywhere but Nygard Cay.

That concession, he said, emanated from the $2.6m Mr Nygard paid as a settlement to STB in November of last year that allowed him to retake possession of his Simms Point/Nygard Cay property. Prior to that, the property was seized following a petition by STB to have it sold to satisfy the $2.9m in debts Mr Nygard owed in legal costs.

During proceedings yesterday, Mr Smith said pursuant to that settlement, STB agreed not to object to an application being made “in the proper way to the proper authority” for the removal of the yacht.

However, he said that was based on the sole condition that whatever soil would be dredged to free the trapped yacht would not be placed anywhere on and/or near Nygard Cay, but elsewhere, like Jaws Beach.

Mr Smith said since the parties arrived at that agreement, STB had been in “continued correspondence” with the other side in a bid to determine the lawful way to achieve that objective. The only “wrinkle” in those discussions, he said, was Mr Nygard’s failure to appear in court on four occasions to date to be sentenced for dredging the sea bed near his Lyford Cay home between March and April 2015, and again in October of 2016, despite a June 2013 injunction barring him from doing so.

And, as he has previously stated before Justice Grant-Thompson and before the Court of Appeal, Mr Smith said Mr Nygard ought not to be heard on any other application he seeks of any court until and/or unless he purges his contempt for failing to attend those proceedings.

Nonetheless, Mr Smith said throughout the period he and YL Ltd’s attorney, Algernon Allen were communication, STB always understood that the yacht and whatever application needed to be made for its removal would have been made by Mr Nygard. However, he said it was “only recently” that Mr Allen indicated that the yacht was in fact owned by YL Ltd.

In light of that revelation, Mr Smith said STB is not convinced that YL Ltd is not simply a front company for Mr Nygard. However, he noted that pursuant to a final judgement made in the third judicial review of Mr Nygard’s dredging activities, an order was made prohibiting Mr Zonicle from considering any application from Mr Nygard and/or his agents.

Mr Allen, who said he was only recently “parachuted” into the matter, insisted that the yacht in question in fact belongs to YL Ltd, and not Mr Nygard. However, he said he was merely seeking to better facilitate the process for the yacht’s removal, whatever that may be, and that he was not objecting to Mr Smith’s and the government’s opposition to the granting of the ex-parte order.

Justice Grant-Thompson consequently ordered that the ex-parte order she granted on Monday be set aside.

Yesterday’s matter stems from Mr Nygard’s ongoing battle with STB over allegations the construction/development activities at his Lyford Cay home have led to a substantial growth of the property.

The group claims Mr Nygard has almost doubled the size of his property, from 3.25 acres to 6.1 acres since he acquired it in 1984, by allegedly reclaiming Crown land from the sea.

Couldn't of happened to a nicer guy!

Can we, the Bahamian people, somehow strike a deal with the court to let YL Limited retrieve the yacht provided both Smith and Allen leave the Bahamas on board it for good, i.e. to never return? LMAO

I self-deported myself, my family and my small fortune quite a few years ago. I now spend most of my time between my ranch in Montana, my condo in Toronto and my villa in Costa Rica. My home in the Bahamas is under lease for the next several years (leased by a foreigner). In another few years, when the U.S. economy rolls-over, you're going to be wishing you could have done the same. ROWL

You really are a sick puppy.---- but your lies really leave a lot to be desired ------ anyway keep trying, you'll make it.

I don't why the Court and the People in the Bahamas so hard on this man.He brought money and prestige to this small Island and Lyford Cay especially many years ago and lived in peace for so long.The Court and the Attorneys are having a field day with this wealthy man who has brought millions and prestige to this land that Mr.Taylor devloped.It was a vacant piece of land with a beach until he arrived.The Courts and the people and the Press should leave him alone.He may have increased his property and removed some beach/sand but then look what he gave back to this once British Colony that no one else wanted.It was a time when after the British left during Independence when no one else wanted it.Crime was out of control and the locals thought that the Govt owed them living.The British left and Bay street was a goats town that no one else wanted.I was there and saw the crime and locals stealing for their next meal.Please leave this man alone.At his age in his life ,he deserves peace and tranquility.

I am with you,Stoner.! Wonder what move all these noise and drama. What wrong with expanding your land,the one that you bought because it was not a gift,he pays for it. This man deserves to have fun,old but full of life,white hair and plenty money. How he got so much? Other places like DR expelled him after finding out by the year 1982. Now he only wants to have fun and he is paying millions for it. Leave him alone,! He gets into his other rich neighbors ' nerves.