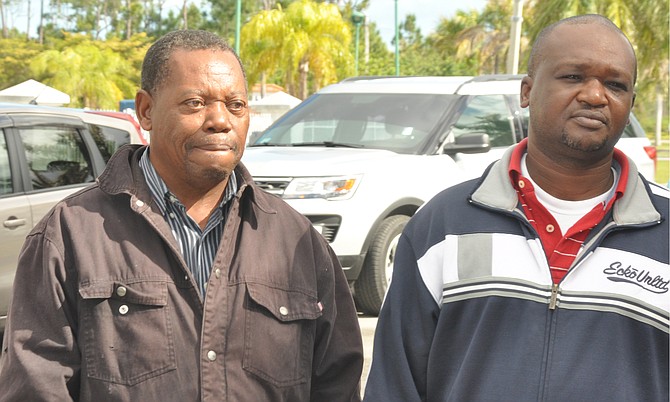 TWO men accused of electricity theft and causing damage to Grand Bahama Power Company property of over $650,000 were arraigned in the Freeport Magistrate's Court on Friday.

Michael Neymour, 63; and Bernard Clarke, 43, both of Freeport, appeared before Deputy Chief Magistrate Debbye Ferguson in Court Three on seven counts each of abstracting electricity and causing damage.

In count one, it is alleged that between August 11, 2014 and March, 16, 2019 the accused being concerned together and with others unknown fraudulently used electricity in the amount of $113,760.81, belonging to GB Power, a licensed company in Grand Bahama.

They were also subsequently charged with causing damage. It is alleged that during the same period, the accused intentionally and unlawfully caused material damage to conductors and electrical wires at Sav Mor Drugs in the amount of $18,674.

It is alleged that between January 31, 2018 and March 16, 2019 both men, being concerned together and with others unknown, fraudulently used electricity amounting to $43,666.46, and caused $4,700 worth of material damage to the Power company property at KFC.

Neymour and Clarke allegedly abstracted electricity between January 31, 2018 and March 2019 by fraudulent using electricity in the amount of $65,610.95, and causing material damage of $5,214.14 to the company property at Pollo Tropical.

Next, it is alleged that the pair between January 31, 2018, and March 16, 2019, being concerned together and with others unknown, fraudulently used electricity in the amount of $21, 360.76, and caused $4.750 in material damage to property located at Burger King on Yellow Pine Street.

It is alleged that between October 12, 2018 and March 15, 2019, the men, being concerned together and with others unknown, fraudulently used electricity amounting to $21,760.76, and caused material damage in the amount of $4,714.13 at Burger King, Ranfurly Circus

It is also alleged that between January 31, 2018 and March 16, 2019 the men concerned together and with others fraudulently used $70,543.68 worth of electricity, and caused $5,750 in material damage to property at Burger King on East Mall Drive.

And, it is alleged that between January 18 and March 16, 2019, the accused concerned together and with others unknown fraudulently used electricity amounting to $70,665.30, and caused material damage in the amount of $6,214.13 at Burger King Downtown.

Neymour and Clarke elected summary trial and pleaded not guilty to all charges.

Prosecutor Sergeant Calsey Arthur objected to bail based on the total cash figures involved in the matter. He noted that other persons are still being sought in the matter and argued that the accused might try to interfere with witnesses or obstruct the course of justice.

"We also object to bail due to the nature and seriousness of the offence and the strength of the evidence," he told the court.

As it relates to the offence of causing damage, Prosecutor Arthur explained that the magistrate's court lacks jurisdiction to grant bail.

Brian Hanna, who represented Neymour, told the court while his client was charged with abstracting electricity at certain properties, they are all owned by other persons.

He stated that his client did not use any of the properties or benefit anything from the property.

Wendell Smith, who represented Clarke, told the court that on the issue of abstracting electricity the consequences if found guilty would be a maximum penalty of $2,800 fine imposed regardless of the huge sums involved in the case.

"Bearing in mind what the maximum consequence is, I ask the court to consider granting bail to both of the defendants, bail with respect to abstracting electricity," he said.

However, while the court has no jurisdiction to grant bail with respect to the offence of causing harm, Mr Smith noted that none of the accused have any antecedents. "Both are industrious individuals in the community, they have families, they have ties in the community and so there is nothing that was mentioned by the prosecutor with respect to the abstracting electricity charge why both of those individuals are not able to get bail in the magistrate's court," he said.

Mr Smith raised another point regarding the abstraction of electricity charge. He explained that when looking at the particulars with respect to the trial and the ability of both defendants to have a fair hearing, the law gives a timing on the time when summary offences are to be lodged before the court. He noted that the prosecutor has to look at all counts of abstracting electricity which should have been limited, and would affect that actual amount of the electricity that is alleged to have been fraudulently used.

The judge asked the prosecutor to look into the suggestion made by counsel. Bail was denied and the matter was adjourned to July 22 and 23, 2019. Both Neymour and Clarke would have to apply to the Supreme Court for bail.

Grand Bahama Power Company filed a complaint of electricity theft with police after conducting a meter audit which uncovered a series of electrical diversion instances in the Freeport area. Power supply was disconnected at several businesses, including fast food restaurants, a timeshare resort, and drugstore/pharmacy, which had allegedly purchased what they believed was an energy saving device, which was later discovered to be a fake device and a smokescreen for electricity diversions.