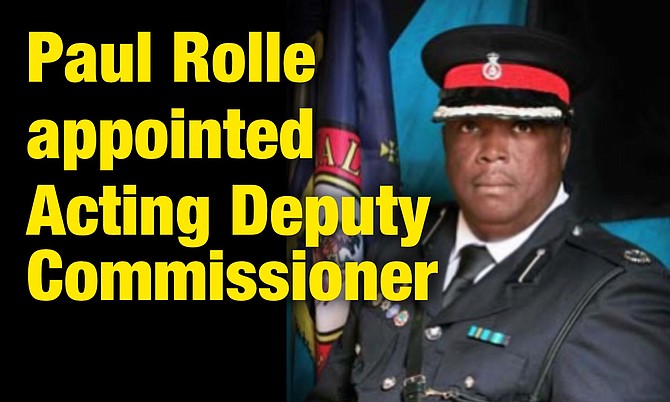 Meanwhile, the Tribune has learned that five of eight senior police officers recently directed to take long-term vacation will return to duty when their leave ends.

National Security Minister Marvin Dames confirmed to this newspaper on Wednesday that the men are not on pre-retirement leave as many believed.

Some of the officers will have as many as five years left on the force when their leave ends; all will have at least two years remaining before their scheduled retirement, The Tribune understands.

Newly appointed Acting Deputy Commissioner Paul Rolle has served on the force for 36 years. He spent five years as the officer-in-charge of the Central Detective Unit. In 2017 he was made head of the anti-corruption branch of the RBPF, leading investigations into high-profile corruption allegations.

Mr Rolle, ACP Ismella Davis-Delancy and ACP Samuel Butler are the only senior police officers who were not directed to take vacation leave recently. Multiple sources told The Tribune that not only have the three accumulated more vacation weeks than some who have recently been placed on leave but they are also closer to their scheduled retirement date than some. Mr Dames would neither confirm nor deny this during an interview on Wednesday, saying he does not want to be drawn into a discussion about “personalities”.

“Others will be going on leave too," he said. "We’re not saying everyone will go on leave at the same time because you have an organisation to run, but everyone will have to bring their leave down.”

Attorney Wayne Munroe has been consulted in connection with a similar matter involving an officer within another law enforcement agency; he said he expects to file legal action soon. He told The Tribune on Tuesday that there is no discernible logic to how the government decided which officers should take leave and when. Suggesting the Minnis administration was clearing the deck, he said sending some senior police officers on a lengthy leave even though they will not enter retirement after their leave will harm their careers.

“Think about you having a bunch of vacation leave and your employer says ‘Rashad, I’m putting you on vacation leave for two years,’” he said. “How is that going to affect your career? The older you are or the more vacation you have, the more imminent you should be on leave. The younger person has a longer time to take it so they should take leave later. If the government’s motives here are pure, they should’ve worked out a system that wouldn’t adversely affect anybody’s career. The easiest way of that is to choose the persons whose vacation runs straight into their retirement. The next set of persons chosen could be persons whose vacation runs almost to their retirement, say a month or two or three because you could bring them back to hand over to whoever is formally replacing them. People who are going to be coming back with years left you should work out a system where every year they must take one month or two months of their accrued vacation. What I’ve said is these officers being affected need to challenge this so they don’t by default agree to it.”

Assistant Commissioner of Police Clayton Fernander, ACP Kendal Strachan, ACP Leamond Delevaux, ACP Ashton Greenslade and ACP Theophilus Cunningham will all return to duty. Some of the men will return as early as January 2020; others will remain on leave late into next year, a source said.

The Progressive Liberal Party has cited politics as the motive for the Minnis administration’s actions. Prime Minister Dr Hubert Minnis denounced the claim during a rally on Wednesday night.

Mr Dames has said the government is directing officers across law enforcement agencies to take vacation leave before they retire because they have often accumulated too much vacation time in violation of public service rules.

Mudda say you're making me out to be a liar. Back peddled on the slaughter to nullify the accusations that politics was at play. No one is sent on leave this long to return back to his job. Hmmm...

It's all just too hilarious and we pay for the long-running comedy!

No Games is a true liar. he may very well believe his own LIES., Hurry up NO Games you will soon be a one time member of the house of assembly.

roc wit doc should know by now, No sensible person believes anything that comes out of his mouth.

Too many khakis on the RBPF ........... this is the basic problem ........ Cannot find sensible job descriptions for all of the khakis .......... And they all have been on the job for at least 25 years and want to stay there until they are forced to go home ...... Sweet, soft, easy office/car jobs with minimum education and good salaries.