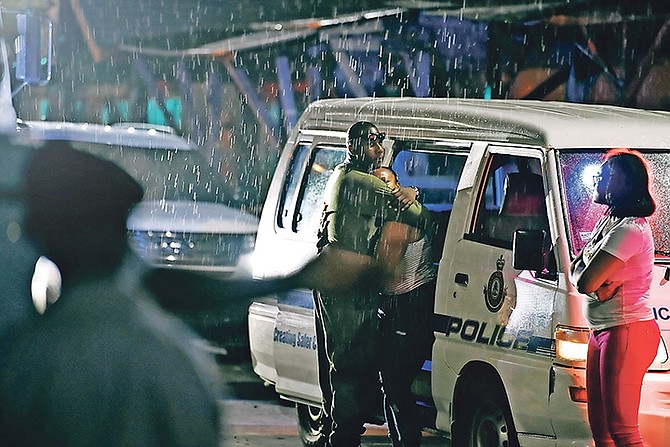 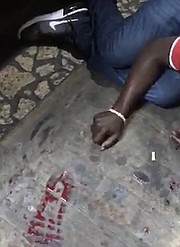 A still from a video taken at the scene of the shooting on Wednesday night. 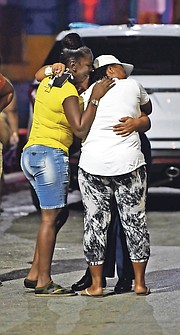 By RASHAD ROLLE and RIEL MAJOR

In the first incident, two men were shot and killed at Potter’s Cay Dock on Wednesday night. The men, both shot in the head, died at the scene.

Police fought to restrain a woman believed to be a sister of one of the deceased. “They wrong for that. Why they kill my brother?” the woman cried.

The double killings come nearly three months after another man was shot dead at the dock and is bound to fuel concerns of the thousands of tourists who holiday at the nearby Atlantis resort.

Acting Deputy Commissioner of Police Paul Rolle said: “Shortly after 8pm police received reports of gunshots at Potter’s Cay Dock at one of the local establishments. The officers assigned to the Potter’s Cay Dock area heard those shots and immediately responded to the eatery where they met two adult males suffering from apparent gunshot injuries to the upper body. The assailants after the shooting left heading in the southern direction of the dock and disappeared in the crowd that assembled after the shooting.”

In addition to the murder on February 10, a stabbing incident at the dock in January left two men with injuries.

“We’re concerned about every murder,” Mr Rolle said. “We want to ensure that every person in The Bahamas is safe so we view murders for what it is and we treat all of them with our utmost concern.”

Asked whether police presence was adequate, Mr Rolle reiterated that police were on the dock and that officers responded to the gunshots.

“We will continue to police as the need arises,” he said.  However, he declined to say if  the patrol of the area will be increased.

“I don’t know if we would call this a hotspot. This is an area where people come to have a good time and we want everyone to feel safe and move about and enjoy yourself,” he said.

Located no more than 1,000 yards from Atlantis, the dock has long been one of the country’s popular cultural hubs, catering daily to Bahamians and tourists.

In the second incident, a drive-by shooting left two men dead and one man injured in hospital Thursday morning.

According to Superintendent Shanta Knowles, shortly after 7am police received reports of gunshots being fired in Whites Addition, Kemp Road and that a number of people were injured.

At the scene, Supt Knowles said: “Once the officers got here, they discovered that two persons were in fact injured and confirmed deceased. Another [person] was transported to hospital and is in stable condition.”

Speaking to reporters during a walkabout in the area hours after the shooting, Royal Bahamas Police Force Commissioner Anthony Ferguson said: “The incident involved a single vehicle that drove through this location and occupants from that vehicle fired indiscriminately thereby fatally injuring two persons.”

Police are actively trying to identify the occupants of the vehicle in question. “So again, we are appealing to the people in the Kemp Road area to assist us with this investigation,” Supt Knowles said. “Give us as much information as possible that we can bring this matter to a close quickly.”

She added: “Police are asking anyone with information that can assist with this investigation to contact the Central Detective Unit at 502-9991/2, Crime stoppers at 328-TIPS (8477) or the nearest police station.”

“A situation created a crime of opportunity today, and two [insert name] took advantage of this lapse and perpetrated a brazen act. As it stands, the [insert name] will now have to rethink its security plan, as police look to bring this matter to a close,” Mr D’Aguilar said, when made aware of the incident.

They still washing the conch in harbour water? Don't want tourists getting sick.

Amen. My wife once made the mistake of eating conch salad at Potter’s Cay — she got so sick we eventually had to fly her to the States for treatment.

You took your wife to Potters Cay for conch salad? Wow!

We were waiting for a ferry, moron, and the departure was delayed ... as usual. Speaking of “delayed,” has your IQ risen to double-digits yet?

... ruminate on your response and see whose IQ should be questioned!

It would seem that, at the daily rate of shootings in the Bahamas, the national security issue will solve itself in a year or so as there won't be anybody left to shoot or shoot at.

Yes, yes another two comrades shot dead on Wednesday night in Colony of Out Islands capital........ wait for the hypocrisy one minster of peoples security comrade Marvin resoluteness lay claim how progressive for the the Colony and its Out Islanders to now enjoy live in safer place than they did's 730 days back in time, yes, no.... Even following murderous shoot up atop Mount Fitzwalliam, has Her Excellency Comrade Marguerite vacated her royal resoluteness order eviction out Peoples 'Honourable' House of Assembly order Her Excellency's soldiers surround the Churchill Building to execute her royal order for the blanket arrest on charges under 'poor governing performance act' - of all 35 Imperial red shirts governing MP's, yes,no?

... if only we could understand what he was saying. In his attempts to be “cute,” poor Tal renders himself unintelligible.

No games murders are not FNM, PLP or DNA.. But it seems to be all the FNM has to boast about. Crime and murder is a Bahamian problem.

STOP boasting. you have nothing to boast about.. It is beyond you.

How is it that Potters Cay has these sort of crimes at least once or twice every year. That area should be blanketed with CCTV (won't stop the crime but at least will identify who did it), and have police patrol. When i was a kid i used to love going there and seeing the live fish you could choose etc. this was when it was a fishermans area. It is now just a number of rundown bars where people think twice about going. Unfortunately it won't change as it will take a mindset change for change to happen and that won't happen.

......SEEMS MORE LIKE ONCE OR TWICEEVERY MONTH......and blanketed with CCTV....well jus look at the lamp poles you will see numbers of them....AND THERE IS A POLICE STATION NEXT TO GOVT AGRICULTURE BUSINESS.....murders fella getting jooked...shootings...even foreign sailor fella murdered who tried to defend female gettin robbed....other in parkin lot....other in nearby seems abandoned motel nearby...

So everyone is asking’ Why is everyone in Nassau so angry?’ Maybe that question should be asked of Burger King who is now introducing its ‘even angrier whopper!’ So what is the subliminal message here or is something really in the food or diet that is making Bahamians angry? Or it’s just the day to day stress of survival that is getting to them? One of the young men that was killed on Potters Cay doesn’t live in Nassau. He was here to attend the funeral of a prison officer that was st 11:00 am today. He didn’t make the funeral. RIP. The other two men who were shot and killed in the Kemp Road area were said to be caught up in the crossfire between two vehicles that didn’t involve them. Was a matter of being in the wrong place at the wrong time. So mow that the police is doing their job apprehending law breakers, now is the time to get boots on the ground and find the reason for all these murders. They will never stop until the problem is fixed.

From the accompanying photo of the story those customers sitting at the stalls are quite brave to still be sitting as the murdered body get wheeled into the vehicle by them. Guess wid this hundreds perhaps thousand plus occurances over years one naturally becomes numbed hardened losing human values....

I CAN OFFER A POSSIBLE REASON AS TO WHY "BAHAMIANS" ARE SO ANGRY, BUT SOME MIGHT NOT LIKE IT.

I WILL SAY THAT MAYBE THE INCREASE IN OUR FOREIGN POPULATION COULD POTENTIALLY BE A REASON. HISTORICALLY BAHAMIANS WERE A PEACEFUL SET OF PEOPLE, EVEN BEFORE THE LUCAYANS WERE WIPED OUT- THEY TOO WERE PEACEFUL. THAT BEING SAID COUNTRIES LIKE HAITI AND JAMAICA WERE HISTORICALLY VIOLENT COUNTRIES, WITH THE PEOPLE PRONE TO ACTS OF REVOLT.

AS WE CAN SEE EVEN FROM RECENT EVENTS IN PLACES SUCH AS HAITI AND JAMAICA, THEY RESPOND TO THEIR ISSUES WITH VIOLENCE. AND IT STANDS TO REASON THAT THE MENTALITY THEY BRING HERE TO THE BAHAMAS IS SEEPING IN TO AFFECT BAHAMIANS.

FAST FORWARD NOW THE BAHAMAS IS ESSENTIALLY A MELTING POT WITH MANY BAHAMIANS HAVING HAITIAN OR JAMAICAN ANCESTRY, OR BEING EXPOSED TO PEOPLE OF THOSE ANCESTRY. SO MAYBE, VIOLENCE IS NOW BECOMING AN INNATE PART OF THE CULTURE.

Wonder why the body of the deceased is being wheeled into a private vehicle?