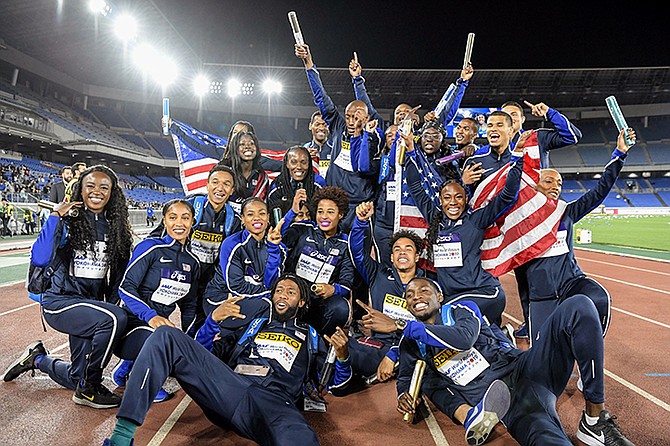 THE US relay team pose for a group photo after winning the 'golden baton' at the IAAF World Relays Sunday in Yokohama, Japan. (Nozomi Endo/Kyodo News via AP)

It was a disappointing appearance for a shorthanded Team Bahamas at the 2019 IAAF World Relays.

Team Bahamas did not enter the men’s 4x400m and was disqualified from the men’s 4x200m to conclude competition at the fourth edition of the meet, hosted in Yokohama, Japan.

The Bahamas was originally scheduled to compete in heat three of the 4x400m, but did not participate due to a late withdrawal of Steven Gardiner as a result of an Achilles tendon strain. They entered the team of Gardiner, Alonzo Russell, O’Jay Ferguson and Andre Colebrooke for the event, with Teray Smith as the alternate.

“Stevie couldn’t go because Stevie’s Achilles was giving him a lot of problems, so we had to withdraw him from the race,” said Team Bahamas head coach Rupert Gardiner.

“Also, our fifth man, which was Teray Smith, got hurt during practice, so that’s how it went. There’ not much you can do with an injury.”

Gardiner noted the injury during practice before the event and was placed on a limited practice regimen.

According to BAAAs President Drumeco Archer, the injury was disclosed too late for the Bahamas to make a change and replace Gardiner with an alternate.

“Once a relay declaration is submitted and the time has expired, any changes made after that time are invalid. It amounted to us not being able to replace Mr Steven Gardiner for another athlete and on technicality we were unable to enter into the event because of the injury to Mr Steven Gardiner.

“Certainly we would wish not to aggravate an injury where in fact we would be expecting him to represent the Bahamas at future competition,” he said.

The 4x200m team of Cliff Resais, Stephen Newbold, Anthony Adderley and Shavez Hart fumbled the baton on the first exchange, relegating the Bahamas to one of two teams disqualified from the race along with Nigeria.

Gardiner opened his outdoor season last month with a then world leading time of 20.04 seconds in the 200m at the 2019 Miami Hurricane Alumni Invitational. He is next scheduled to compete on the Diamond League circuit in Shanghai on May 18.

The 2019 World Relays marked the second time in as many years that there was a controversy with Gardiner and his participation as a member of the 4x400m relay team.

At the 2017 IAAF World Championships in London, Gardiner opted not to run in the opening round due to limited recovery time between the relay and his record-setting run in the individual 400m.

The BAAAs took the matter to an IAAF tribunal for review, and following an investigation that spanned several months, the conclusion was that there was insufficient and inconclusive information to form the basis of any disciplinary action on any member of the men’s 4x400m relay.

Without Gardiner, the team of Russell, Ferguson, Michael Mathieu and Ramon Miller ran a season’s best but finished sixth in their heat and 11th overall.

The Bahamas staged the first three editions of the World Relays at the Thomas A Robinson National Stadium in 2014, 2015 and 2017. They also won the bid to host the World Relays in 2021 but, last year, the Bahamas Government pulled the plug on this year’s event, indicating that it was not financially feasible to the millions of dollars estimated to host.

More than 700 athletes from over 40 countries participated in this year’s event. The United States retained the “golden baton” as overall champions as the event concluded before a crowd of more than 20,000 at Yokohama International Stadium, the largest to gather at an IAAF World Relays.

Only the second time I've ever heard of a fumbled baton.