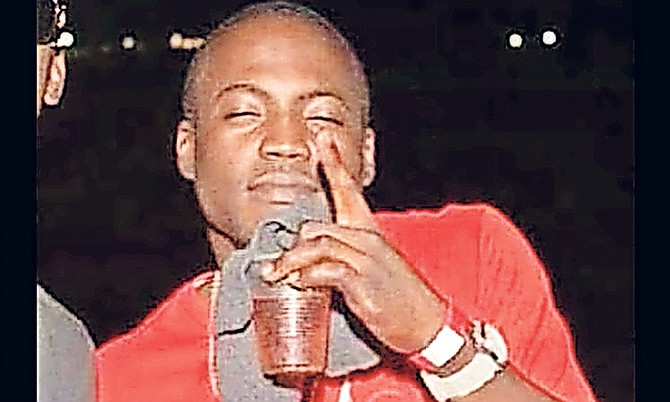 POLICE are investigating a drive-by shooting that left one man dead and four others injured in hospital on Monday night.

According to police, the incident took place shortly after 11pm. A group of people were standing on Plantol Street when two vehicles pulled up, the occupants opened fired and injured five people before fleeing the scene. Paramedics were called to scene and transported four victims to hospital. The fifth victim succumbed to his injuries and was pronounced dead on the scene, police said.

The Tribune understands the victim is 26-year-old, father-of-one, Kyle Rolle aka “Zombie” however, his identity was not released by police.

This incident pushed the country’s murder rate to 29, according to The Tribune’s records.

Distraught relatives and members of the community flooded the home of the deceased yesterday.

The victim’s mother, who preferred to be unnamed, said her youngest son was a “pleasant person who never troubled people.”

She said: “I’m hurt right now, and I don’t know why they did it. Because it just hit my door step and I know how other parents feel now. This is a day I will never forget. “

The aunt of the deceased, who also preferred to be unnamed, said this situation is the first for their family and it is “a blow.”

She said: “It’s very emotional, very distraught give and take that Mother’s Day just passed. He wasn’t only my nephew, but he was just like my very own child. Right now, this is a shock to us because nothing like this ever come knocking on our doors.

She added: “He was a quite loving person. Like I said he is no angel, you know everyone has their faults in them, but he has never been arrested, never been to prison so we are lost and still trying to figure out what was the motive for this. Why? Why did it happen? Questions that needs to be answered.”

When asked how she felt about the violence in country, she said: “[Violence] within itself I don’t know…the government really needs to try do something about it. They really need to crack down on crime.

“It’s unexplainable because here it is, we’re saying the [government] needs to do something about it but first and foremost it stems from the home so if these parents would try and put these children on the right path then we wouldn’t have so much of this violence.”

She also said: “It’s [also] the company they keep as well so here it is while they’re in the home, we can say ‘okay this is our good son [or] daughter’ but when they’re on the streets we don’t know exactly what they’re doing.

“As long as they’re in your eyesight you could vouch for them but when they go out on the streets who am I to say what they’re out there doing and what type company they are keeping or involved with?”

That's the best picture the family could give of this dead boy? Partying, drinking and looks like he's stoned! SMH

Is it possible for the police to also mention whether or not all these dead boys/men are in gangs. That would help me to save my sympathy for only the true victims.

Sympathy to the family. This picture is suggestive. None the less a young life gone senselessly.

He's drinking a beer while he's at a concert...his eyes closed when they snapped the pic....he may be the innocent bystander who knows