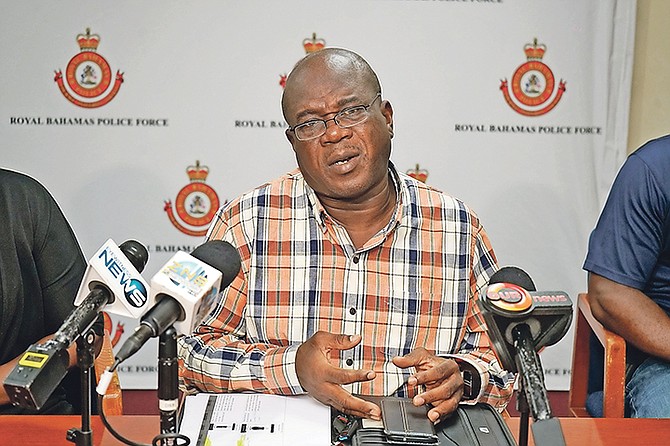 POLICE will continue to focus on high visibility throughout the capital, according to Chief Superintendent Solomon Cash, who expressed concerns over the recent downtown abduction and sexual assault of two young women.

Mr Cash called the abduction an isolated incident, telling The Tribune that what began as an armed robbery – a crime of opportunity – led to several other crimes.

The young women were taken from the area of Nassau Court near McDonald’s downtown around 11:30pm on Wednesday.

“You need to be concerned about where you go,” Mr Cash said yesterday, “how you park, particularly if you are far away from where you are going. It makes you vulnerable prey.

“It is a concern when you have incidents like this happen in the downtown area, high areas where we have a lot of social activities. We want people to be cognizant of their surroundings, particularly where they park, especially when it’s far away.”

During the three-hour ordeal, one of the women was raped and the other was forced to perform a sexual act on the men, according to unofficial reports.

The women are believed to be around 18 and were headed to a bar in downtown Nassau when the incident happened, The Tribune was told.

The men allegedly attempted to get a ransom by ordering one of the women to call a family member and demand that $1,000 be taken to a specified location.

Police investigations led to the recovery of the two young women on Carmichael Road.

Yesterday, Mr Cash was asked whether the incident indicated a need for increased police presence in the downtown area.

He declined to comment on whether its proximity to high tourist traffic will prompt renewed security warnings from the US embassy.

In February, the US State Department issued a “Level Two: Exercise Increased Caution” alert warning US citizens that violent crime such as burglaries, armed robberies, and sexual assault were common in tourist areas in New Providence.

The alert noted the vast majority of crimes occurred in the capital and Grand Bahama, but added the Family Islands were not crime-free.

Mr Cash continued: “Our primary objective is to prevent crime, and one of the strategies is police presence throughout the entire city, not in one particular area.

“It’s one of the things in our policing strategy to have high visibility of officers,” he added, “so we will continue to focus on that.”

The police are killing and we paying their salaries amen the judges can’t be trusted that Jezebel magistrate who committing perjury and fixing cases but God says ‘y’all blaming me. I sent my only begotten son to y’all and not only did yinna reject him, but y’all crucified him. So for a small moment I will turn my head, I will sit back and let y’all work it out. Even with that Jezebel judge until she falls through the window. Who killed Sir Harry Oakes?

.......... And, in no particular order - both the comrade residents and visiting populaces - does needs to be on concerned alert about where you goes, how you parks, particularly if you are far away even though Out Island Capital Nassau Town only has a length of 21 miles and a width of 7 miles from no matter where you are going end ups driving to, to park - "It still goin' makes you vulnerable prey."......... yes, no, could've been wording used by the USA State Department's growing number Travel Alerts posted online, warning Americans about visiting Nassau Town, yes, true....... You just can't make this up, yes, true?

Homeland Security need to be Proactive in safe guarding our Citizens and visitors and not reactive as they always are in saying what need to be done for the sake of good press. The Bahamas should be sending a message to the world that any male found guilty of raping a female in the Bahamas will pee from a tube into a plastic bag for the rest of his life behind prison bars,

3rd Paragraph. "The young women were taken from the area of Nassau Court, near McDonald's downtown around 11:30 p.m. on Wednesday."

Why is it Comrade Chief Superintendent Solomon, dressed likes he's either feeling pressure job, or just maybe Supt has curbed he enthusiasm wearing expected khaki, or just decided, what hell, I'll show up press conference my civis likes it's casual Friday...... certainly sometin so policeman's un royal, we beloved Queen might want looks into, yes, no?

You Bahamian Boys need to stop this, keep our country SAFE. I a little bit of White pussy .might be Grande to hurt us in the eyes of Tourists of the Bahamas? Idiots.. go jerk off.. same ending feeling, no love .. just a piece of shit, you all are

It is not acceptable, period ......... NO woman (person) should be sexually assaulted.

Just this morning I was enjoying the looking out the kitchen windows. I began reflecting on Patti and my trips to the Bahamas. I could even feel the breeze and smell the ocean air. We woke early and began our day at the pancake house, boiled fish was my favorite. Then we would just start walking, most of the time with no destination in mind. We might end up at the beach or west end. Everyone was so nice. I have never felt so at peace with life. Kindness was all we ever encountered, what happened. What happened to being a good neighbor. Drugs and alcohol have damaged minds and people have lost their way. Family and friends are the most important thing in life. Simpler times were better. I’m glad I wasn’t born any later in time, I wouldn’t known true happiness. My kids know what happiness is and they live it.