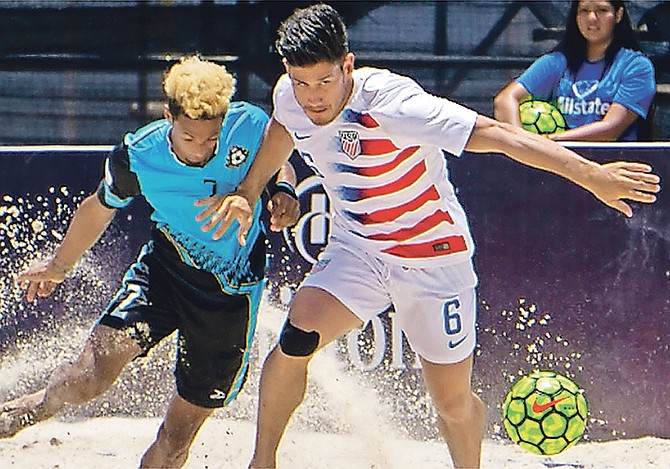 Team Bahamas' Timothy Munnings (left) in action during the game against the US.

Team Bahamas lost its first match of the group stage but already secured its place among the quarterfinalists in the 2019 CONCACAF Beach Soccer Championships.

The Bahamas was edged 3-2 by the United States to conclude play in Group C yesterday with a 2-1 win loss record at the tournament in Puerto Vallarta, Mexico.

Nesly Jean and Jean Francois both scored goals for the Bahamas.

The United States was led by a brace from Tanner Akol and Nicolas Perera added another to give them the advantage.

The Bahamas finally scored midway through the final period when Timothy Munnings converted a header from close range.

Perera converted a late penalty kick as the USA finished Group C with a 3-0 record.

In the group’s other game, Antigua and Barbuda concluded the 2019 CBSC on a positive note with a 9-4 win over Bonaire to finish at 1-2 in the group. Bonaire finished 0-3.

The eight teams that advanced to the quarterfinals include Trinidad and Tobago, Mexico, Guatemala, USA, Bahamas, El Salvador, Guadeloupe and Panama.

Costa Rica, Jamaica, US Virgin Islands, Turks and Caicos, Antigua and Barbuda, Bonaire, Guyana and Belize were eliminated following the completion of the group stage.

The USA is scheduled to take on Guadeloupe, Panama is set to face Guatemala and Mexico is expected to square off against Trinidad and Tobago.