CARICOM must unify to resist the imposition of OAS chief 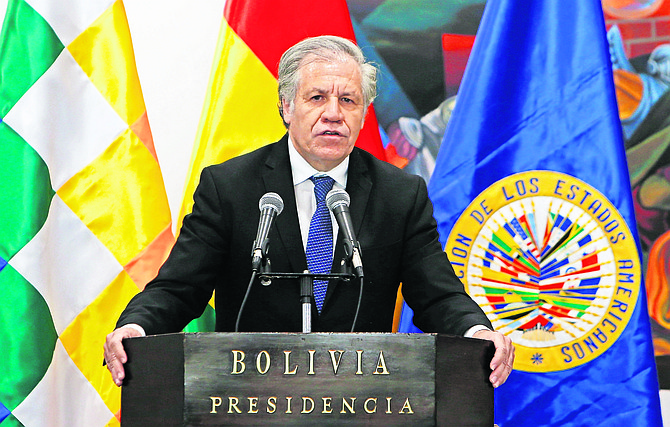 Secretary General of the Organization of American States Luis Almagro Miguel speaks during a joint statement with Bolivia’s president at the government palace in La Paz, Bolivia at the weekend. Almagro is in Bolivia on an official visit.

READERS of this commentary, particularly those in small countries, might wonder why they should be concerned about who is the chief executive officer (CEO) of any multilateral or international organisation. It could be claimed the disposition of the person holding such an office, is far removed from the existence of people who are focussed on the necessities of living and improving their lives.

They would be wrong to dismiss interest in the holders of these positions.

Caribbean small states are already marginalised in the world with little account being taken of the significant threats posed to their well-being. Among those threats are climate change, global warming, exclusion from access to concessional funds for development, very poor terms of trade, increasing erosion of their sovereign rights over matters such as the rate of taxes they charge and the incentives they offer to businesses so as to remain globally competitive in the industries that provide employment and the opportunity for ownership.

In this context, it is vitally important to people in small and vulnerable countries that the CEOs of inter-governmental organisations are people with a commitment to reducing poverty, advancing economic development, improving access to education and training, and promoting international arrangements that allow developing countries to compete in the global community. It is also important such CEOs be genuinely interested in safeguarding human rights, protecting citizens from abuse by governments, and upholding democracy and freedom of expression.

These are the qualities that heads of multilateral and international organisations should possess if they are to serve the interests of the global community, particularly the people of small and vulnerable nations.

Inevitably, however, governments of larger and more powerful countries dictate who ends up in these positions. These governments select candidates who serve their interests and, using their greater financial resources and capacity to pressure others, they ensure their appointments.

In the cases of the International Monetary Fund and the World Bank, the European Union and the US have long since arrogated the posts of heads of these organisations to themselves through an understanding between them that the US will hold the headship of the Bank and the Europeans the headship of the Fund. Invariably, the holders of these posts are then in thrall to their patrons and, over the decades of the existence of the two organisations, few of them have strayed far from the positions of their sponsors.

There are only a few organisations in which Caribbean countries have a genuine opportunity to influence who is elected as their chief executive. The Organisation of American States (OAS) is one of them.

Repeatedly, I have called for the 14 member states of the Caribbean community (CARICOM), that are also members of the OAS, to nominate one suitably qualified Caribbean candidate for the post of Secretary-General or to agree on a non-Caribbean person who would be mindful of the importance of Caribbean interests.

It is alarming that, counter to all electoral arrangements that have ever been instituted for the election of the OAS Secretary-General, certain governments are busy promoting the idea that, at the OAS General Assembly in Colombia in June, 18 countries should force through the re-election of the incumbent, Luis Almagro, for a second term – one year before such an election is due, and for which no proper arrangements have been made. This process is usually called “rigging”.

Such an action would be as unprecedented as it would be wrong. A forced re-election of Mr Almagro, one year before an election is due, would be highly improper. But, it could be done. The rules allow for the nomination of a candidate up to the morning of the day an election is held. And if, as has been the recent experience, 18 countries vote to hold such an election at the General Assembly in June, it can be done.

That is why Caribbean people should be interested in this matter and in the position their governments take.

The behaviour of Mr Almagro as Secretary-General of the OAS has left much to be desired. He is a very bright and clever man and with a different attitude he might have served well the OAS and all its member-states. But, instead of ending divisions by building bridges between states and working to garner consensus within the organisation, Mr Almagro has become a divisive figure.

Further, his disregard for the Permanent Council, which is comprised of the representatives of governments, and his readiness to pronounce his own strongly-held views in the name of the OAS, have compromised the organisation, depriving it of a role in resolving conflicts within member states of the organisation and between them. Additionally, the Caribbean has suffered under his stewardship through the absence of any advocacy on his part to maintain funding for Caribbean programmes.

Beyond the necessity for a challenge to him, given his record, his forced re-election by any foisted process would leave the OAS in tatters. It may even cause some member states to reassess the value of their continued membership of an organisation which is ruled by the will of a simple majority and the officers they impose.

For previous elections of a Secretary-General, including Mr Almagro’s own election, the Permanent Council of the OAS put rules and procedures in place. Among those rules were that a date for elections would be set by the Permanent Council and member states would nominate candidates who would make public presentations to the Organisation on their proposals and initiatives prior to the elections.

It has never been envisaged, as is being done now by some governments, that the preparation for elections of the Secretary-General would not follow established rules and that a fully democratic process would not be adopted.

CARICOM states will have to assert themselves immediately in the OAS in nothing short of full regional solidarity and unity to insist on a Permanent Council meeting that sets the rules for the elections on a democratic and consensus basis. Anything less than full CARICOM unity will hurt the region’s interests.

The writer is Ambassador of Antigua and Barbuda to the United States and the Organisation of American States. He is also a Senior Fellow at the Institute of Commonwealth Studies at the University of London and at Massey College in the University of Toronto. The views expressed are entirely his own. Responses and previous commentaries: www.sirronaldsanders.com