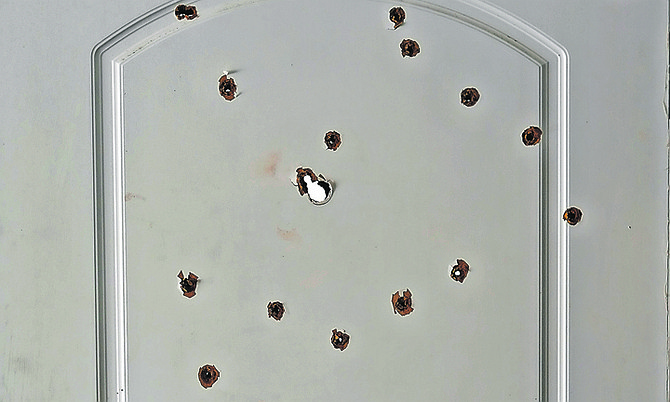 Bulletholes in the door at the scene of the police shooting.

“DON’T shoot, children in here!” a young boy has recounted as being among the last words of one of three men fatally shot by police on Friday.

When officers stormed the sprawling pink and white house just off Eastern Road in the early morning raid, there were six children inside.

Two of them, with the permission of relatives, gave a chilling account of what unfolded when the armed officers entered the house where they slept. The Tribune has decided not to reveal any identifying factors related to the boys in order to preserve their identities.

“He looked at me and took his last breath and mummy was crying,” the younger of the two boys said. “The police came and he did say, ‘don’t shoot my children in here’.

“I thought my daddy would be around until I was 18,” he said sadly.

“He was saying don’t shoot, don’t shoot,” the older boy said. “He was holding me and police start saying, ‘put the boy down’, so he put me down and the police come up the stairs and round him and shoot him in his back.

“And I had blood on my clothes ‘cause I fell down in the blood on the floor.”

Asked if they trusted the police, both boys said they did not. In the aftermath of the fatal shootings, bloodstains and bullet holes feature prominently at the Newgate and Commonwealth Road house where relatives yesterday questioned why police allegedly ambushed “unarmed” Jamaal Penn, Valentino Pratt and Trevor Cooper.

Relatives of the deceased alleged police entered the gates of the home and first shot one man sleeping in the garage in a Nissan Note vehicle. From there they claimed officers barged into a small room in the garage and opened fire on a man hiding underneath a wooden twin bed.

Officers then went inside the main house and up the staircase to the bedroom where the third man was fatally shot, it was alleged.

As it remains unclear to them why police descended on the home, they also vehemently denied that there was any gunfire on police from any of the three men. Police have said at least two of them opened fire on officers.

The home’s residents claimed this was particularly the case regarding Penn, telling The Tribune he would have never put his wife, children and elderly wheelchair-bound mother-in-law, who also slept inside the house early that morning, in harm’s way.

They have also expressed worry about the integrity of evidence, claiming the same officers who shot the men are also investigating the incident.

One of the residents of the home, who spoke on condition of anonymity, said yesterday: “Yes they had (court) cases and stuff before and no one is saying, ‘oh my good child’ but why did they do that?

“Previously they came in and searched the home and arrested one of them, but they didn’t find any weapons so he was released. So now all of a sudden they findings guns?

“Something is fishy with this. How it is that they charged (arrested) people, came back twice yesterday (Saturday) with them and then again today they are here talking about they bringing people for clothes, gone inside with just one woman and no female police officer?”

The relatives further claim a pregnant woman was arrested, denied medical attention and are advocating for her release from police custody.

It is also alleged that one family dog was shot dead and another taken to an undisclosed location.

On Friday, authorities said the men were killed in an exchange of gunfire.

According to Chief Superintendent Solomon Cash, police discovered 22lbs of marijuana and two additional firearms afterwards in a search of the property. In total, police said three weapons were recovered.

At the time, several people were arrested.

Police said this was the result of a manhunt operation in the area to locate a wanted suspect for a recent homicide and recent shootings in New Providence.

Officers were able to enter the property because they were granted a search warrant, CSP Cash told reporters.

He said on Friday: “Sometime around 2.30am this morning police received information relative to a wanted suspect for the most recent homicide in New Providence. As a result of this information officers executed a search warrant on a property. Once officers entered the property they were confronted by two armed suspects who opened fire on the officers. The officers being in fear of their life returned fire. Both suspects were shot fatally. The officers then proceeded to the interior of the building, which they breached.

“As they breached the interior they were confronted by a third armed suspect. As a result of that, officers being in fear of their life opened fire, which resulted in the third suspect being shot and fatally injured. I can tell you once the gunfire subsided the officers were able to recover three weapons.”

CSP Cash has said at least one of the deceased men was known to police.

Attempts to reach CSP Cash and Commissioner of Police Anthony Ferguson for comment on the allegations were unsuccessful yesterday.

Hard to tell the good guys from the bad guys. Scary, scary situation in this country. It is going from bad to worse, almost daily. When there is no accountability the country will soon slip into chaos.......

Not really too sad!

They should back off after receiving inf.about the presence of children at the scene and proceed to evaluate them. We have such a great desire to kill that we still lack the sufficient accountability for the local Police conducts. That scenarios could have left innocent children death,thanks to the RBPF. They think the solution is in killing rather than preventing. One of a seldom few times,the police gets to the scene before further crime is committed (this is not absolute because culprits allegedly already had committed murder) and they chose to cause even more murder allegedly claiming self defense . We love in a suicidal society where there is more victims and victimization than victimisers. Sads!. I'm sorry but the Police Approach,more than likely is on the wrong side in The Bahamas. They are still failing to address minor complaints. A high percentage of murder could be avoided from early stages if they pay attention to minor complaints reported to locals Police Stations. Before being a falling victim per say,we get to be victims in so many ways.

... why would people put their families at risk by carrying out criminal activities in or around their home, particularly one accused of multiple murders? A person who stores drugs or illegal guns on their property where children are are just as responsible for any negative outcomes!

This is where they eat and sleep. This wasn't a secret drug location. I believe the story last week said the neighbours were not used to seeing activity around the house. This is where they lived. It stands to reason the kids would live with their parents. As to storing drugs and having children in the house, plenty "successful" respectable people today know about hiding guns and drugs in the 90's.

This was a reckless operation. Wait for the kids to go to school, the food store, wait for the men to move sonething into the house... there must have been another option other than just shooting up the house. You see them holes? What those bullets for anyway? Elephants?

... and yet the story says there was an exchange of gunfire (implying guns were used by the victims) and 22 lbs of marijuana was found on the property!

Whatever happened to taking up positions and announcing with a bullhorn, “You are surrounded! Come out with your hands up!”?

Even if you are strong supporters of the police, it is difficult to defend firing blindly through a door into a house full of children. There are smarter, more professional ways to do this.

If they fired blindly then some of the kids would have been shot. So... either the police were very well trained and only shot the criminals OR the good Lord guided the bullets to the right targets and protected the children. Either way this was a great outcome.

You haven’t answered my question — Why not eliminate the risk of shooting the children or other innocents by surrounding the house and demanding they surrender? Why shoot through a door without knowing who is on the other side? Sorry, but the police do not have superpowers, they cannot see through doors.

You are ASSUMING those responsible AND their leaders are smart and professional and not just uniformed thugs!

.. you lose the element of surprise (they could flush drugs or get rid of guns) and they could also fight back, increasing the likelihood of innocent victims getting caught in the crossfire!

Seems like an execution. As I read this story it looks like the police knew just where to go. Someone familiar with the regular goings on inside described the layout to them and where these men stayed in the house. I still can't believe they conducted this operation with multiple chikdren in the house. And then whisk the children away like they protecting them....

Where is Marvin Pratt?

IN ALL FAIRNESS.......like truth be told we finest POLICE......seems to be in blink of eye all over ....pore people neighbourhoods....in ghetto like blink of eye ...runnin through bush..track road....all in ..thru..between....neighbourhood......BUT....SEARCH WARRANT FOR ...ANY..HOUSE IN RICH NEIGHBOURHOOD......like dey mussey gan gat to have any i dotted t crossed......double check...triple check.....make appointments.....before doing this in rich people neighbourhood...same ting like we pore people in car falling apart running yellow light gets pull over....an watch nothin gets happen to rich expensive car doing same ting....hardly......

It is concerning that the police would attack a residence with this type of firepower and not have intelligence to know who lived there. And if the children's accounts are right, police actually executed the suspects, who at the time, were unarmed, except for being under the shield of the children. Yes, every law abiding, right thinking Bahamian wants criminals off the street and brought to justice. But do they want this type of activity happening in the middle of the night. Suppose the police mistakenly had the wrong house and went in on an innocent, hard working law abiding family, shooting everyone that moved or was asleep? And is it by coincidence that the invasion at government house that left one marine dead, one unarmed and another charged with murder happened around the same (2:30 am) hour). When the shock waves of police activity is more traumatic than the actions of the criminals they were after, the public will not look favorably towards the police and despise their actions. The public don't trust the police in these type activities. Let the natural cause of justice prevail.

I'm convinced these guys were up to no-good! I support the police on this one!

In a nation of laws, being “up to something” is not a reason to be shot dead hiding under your bed.

Usually one has to look at the other newspapers incl tabloid to have a better picture and looking at the info there is a different picture ....usual one story...another story...and the correct story...

Minnis is an agent too right? Ok then

The police are wrong for going into a residence and shooting it up at 2:30 in the morning regardless of who they was looking for and if you disagree you are also a murderer and a child killer!

Do you realize that more people are dying under the hands of the police than ever before in the history of The Bahamas and even before Christopher Columbus? Something has to be wrong with that